All I can say is wow!

I’m not normally a fan of these crazy super car things but this looks like just the right amount of aggressiveness, detail and a bit of retro all very well resolved. The rims are terrible though and belong on a blinged out 300C 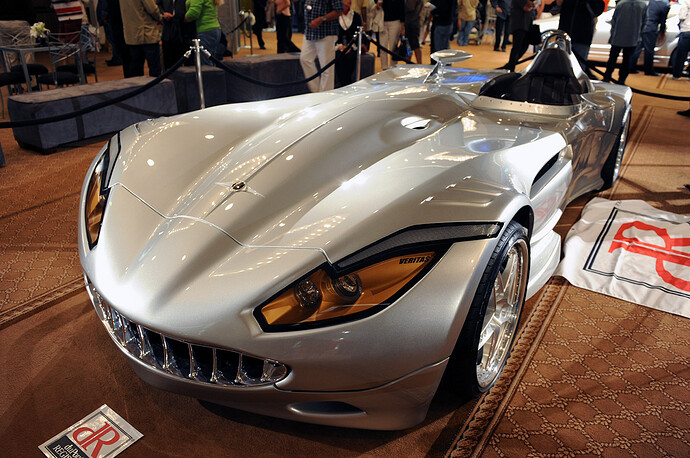 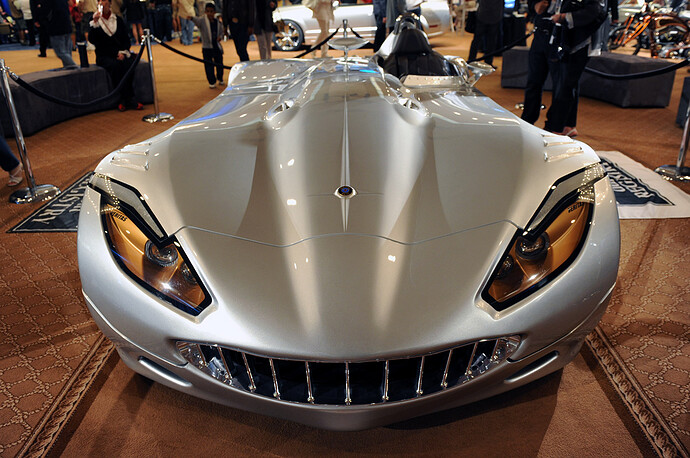 Man, I can not get down with that thing. Way too much. I’ll stick with the Veritas BMX… or a Siata Ferina Spyder, both at Pebble Beach this year as well. Photos from a client that went… he took some great shots. 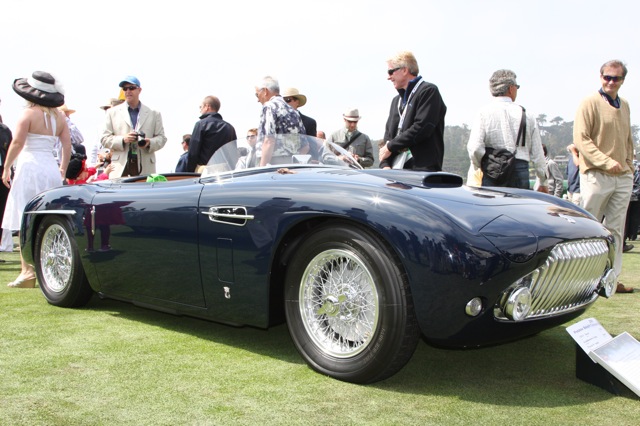 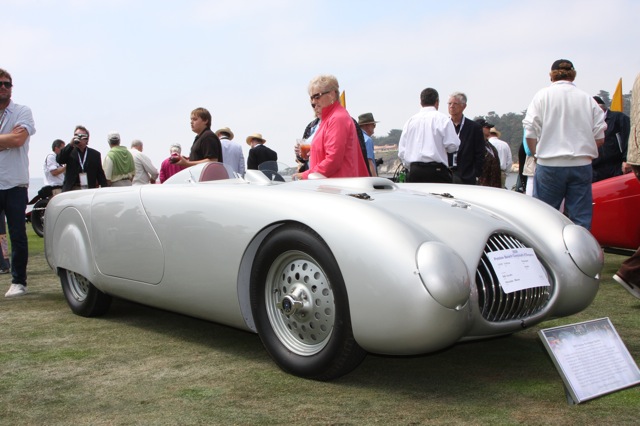 That bottom one of your pics looks nice.

I know what you mean about it being too much, and I sorta agree. I just do like that unlike a lot of these kind of things it does seem pretty well considered and resolved with all that is going on.

I like the photos you posted Richard. I can’t find a gallery on google though.

What I like is how extreme it is and the detailing. That bulging hood is crazy. The fender vents are menacing. I love the “veritas” logo in the head light. 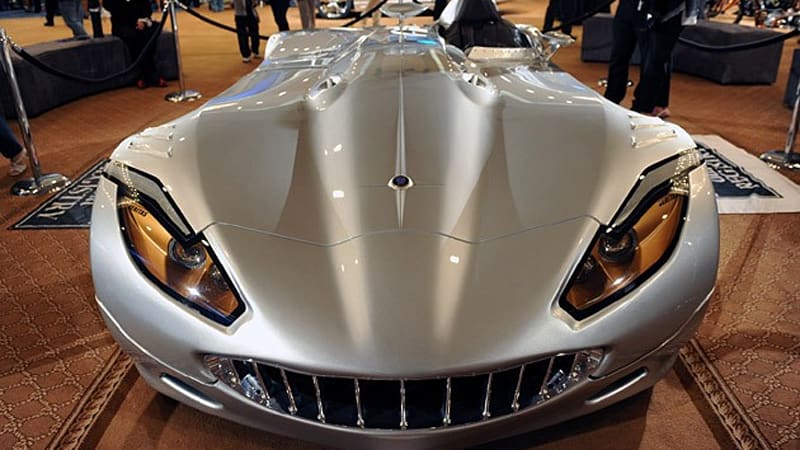 Monterey 2009: Face to face with the Veritas RS III | Autoblog

Veritas RS III - Click above for high-res image gallery We heard that Veritas was bringing its RS III supercar to Monterey this past weekend, but we wer

I love the front end, grille, and headlights (especially the logo in there) but I’m not sold on the overly swoopy rocker panels and the tail end of the car really doesn’t seem to fit for some reason. I’d like to have seen individual taillights, not the long stripe that looks like it was lifted from the Dodge Challenger concept. There’s just something about high, center mounted exhaust that I’ve never liked on any car. Mini, Vette, Zonda, you name it. It just looks weird to me.

I still love the front. Incredibly dynamic and graphic. Those headlights are amazing.

Now the bad…was they drunk when tossing clay when they got to the side of the car? It’s just swoopy for no apparent reason. It looks haphazard and sloppy. Then the back looks like they ran out of ideas and decided to use something from a '70’s Hot Wheels toy car hot rod. WTF. Lastly, they mount those giant wheels and leave a 3 inch gap between the tire and fender. That makes it look like some poor sod built this in his back yard.

What an experience to see this thing though. I went through a whole range of emotions clicking through that gallery…something good in that.

I’d like to read more about why you like it Richard. It’s too easy for us to rip this thing apart. What did you find interesting…I’m sure there is something here.

The Ferrari F40 is brutal, this is comical to my eyes… but I’m just not a fan of angry looking cars. I want it to look a little more sinuous, elegant, s3xy, pretty… like the Alpha 8c, that is my car.

The Ferrari F40 is brutal, this is comical to my eyes… but I’m just not a fan of angry looking cars. I want it to look a little more sinuous, elegant, s3xy, pretty… like the Alpha 8c, that is my car.

+1 here. That teeth-grin ruins so badly. First thing I thought of:

The rest is just a mess of lines. The only thing that shows any sign of restriction is the back end - if they got rid of the center tunnel and the exhaust, the kinks in the lights, and smoothed out the vents.

But yeah… I still can see that this type of aesthetic has it’s purpose in given context. Not my cup of tea (nor size of wallet)

ha, guess i’m out on a limb here. to be fair though, now looking back at the pics in more detail, I pretty much agree with the points made and perhaps don’t like it as much. for me, it was just that initial reaction when I saw it that had some “wow” to it with the colored lamps and the crazy angry snake look. really, as I said it’s not my type of car… maybe just had one glass of scotch too many when I initially saw it and posted

It does look really cool, although I’m not a big fan of asymmetrically seated cars (as this one looks like it is with the other seat covered - when it’s open I do like it quite a bit more

). Top Gear actually did a review of this car, didn’t fare too highly though IIRC.

I generally HATE extreme cars … but this is so extreme that it crosses over to silly. And I like silly; like the louvers on the tops of the front fenders and Captain Nemo’s Automobile from the film League of Extraordinary Gentlemen.

Even with the enclosed wheels, the extreme aft bias of the cockpit reminds me of the old Indianapolis-style “Open Wheel” roadsters.

Just curious … is this a “Skipping Board”? It’s obviously too small to be a “Running Board”. Or, with it’s slight bit of negative camber, is it adding down-force to the front (which it probably needs)? 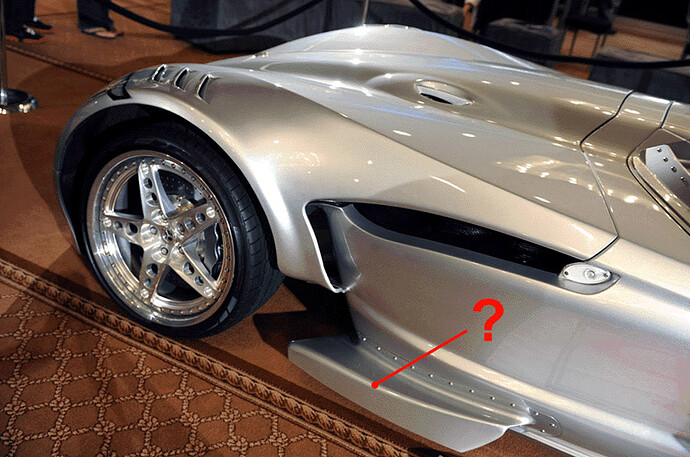 That skipping board could be an aerodynamic aid to help extract air from a front diffuser…if the car underside is that well thought out. Where is Scott Bennett when you need him?

I just thought this would book end well with the Veritas RS III:

And the anonymous looking man-fur.