Money reader for the Blind

I’m revisiting my thesis project which was a money identifier for the blind. There are a few compact solutions out there already, but I wanted to make a more useful and better designed product. The first image you see here is the final concept I arrived at while in college. The shots of the sketchbook are where I’ve been re-thinking the project.

Any comments or feedback would be awesome, thanks! 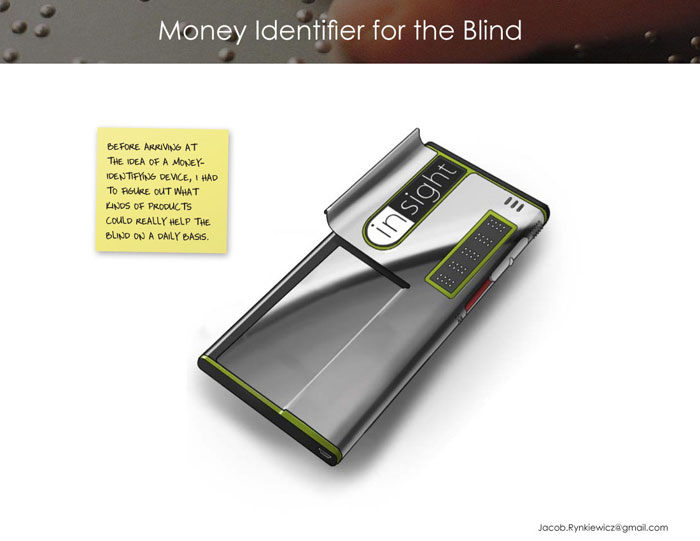 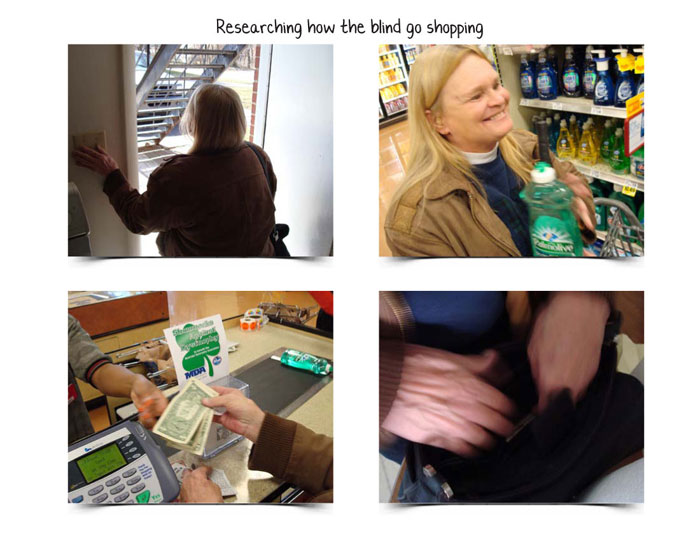 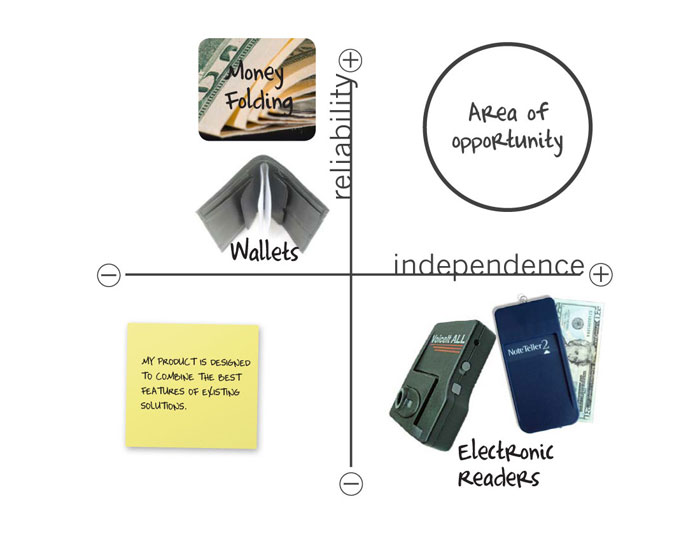 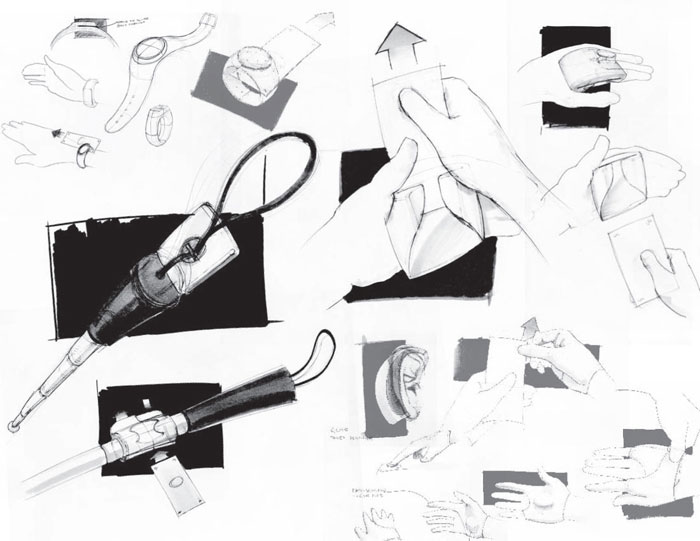 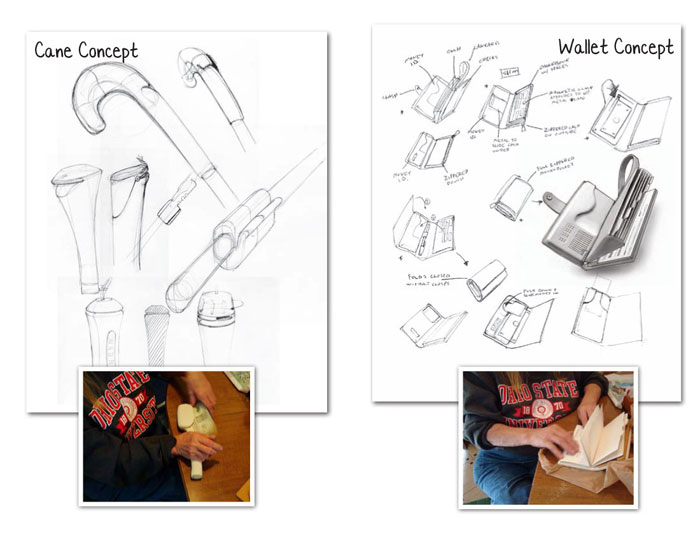 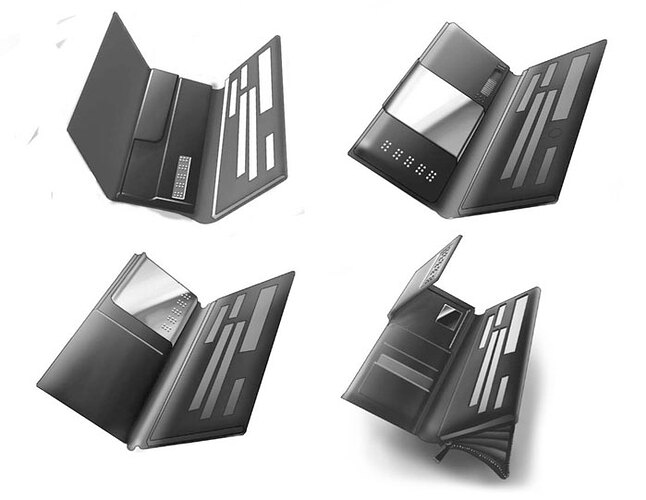 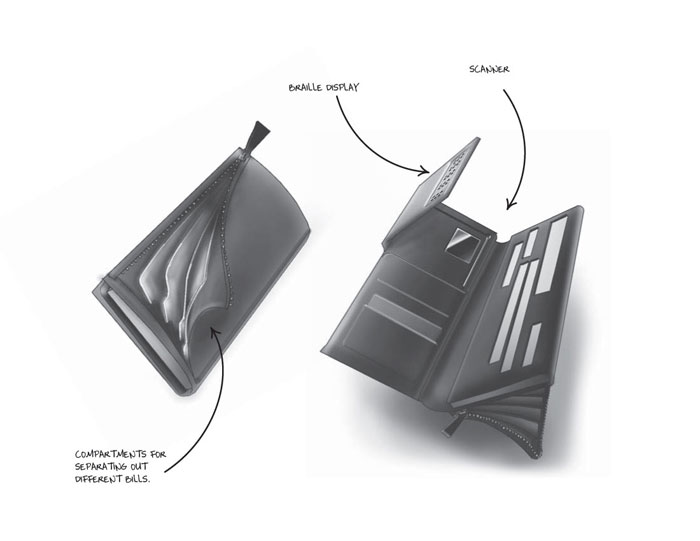 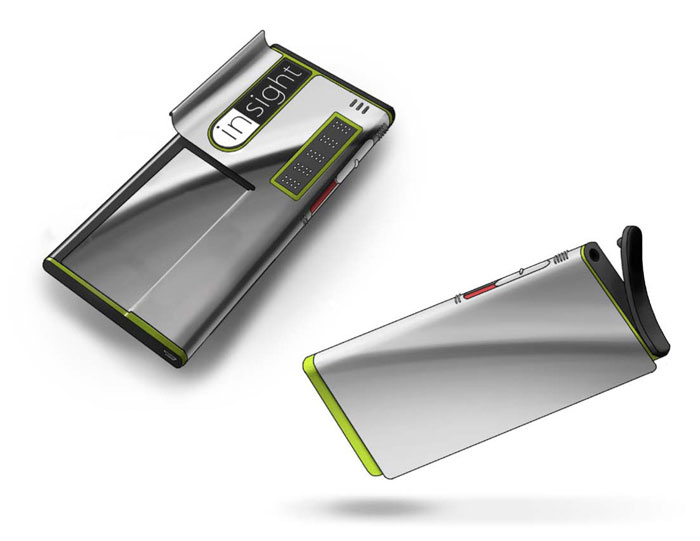 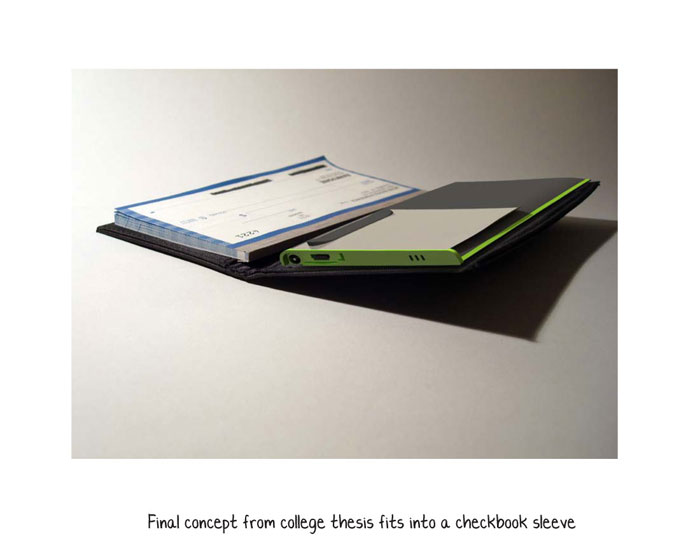 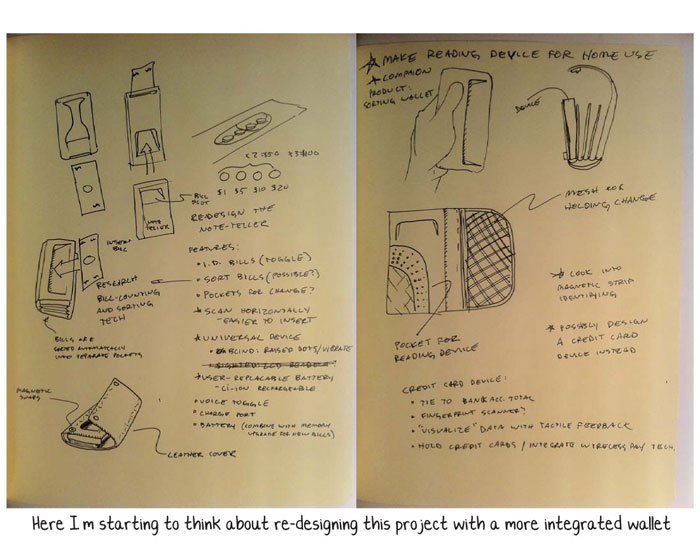 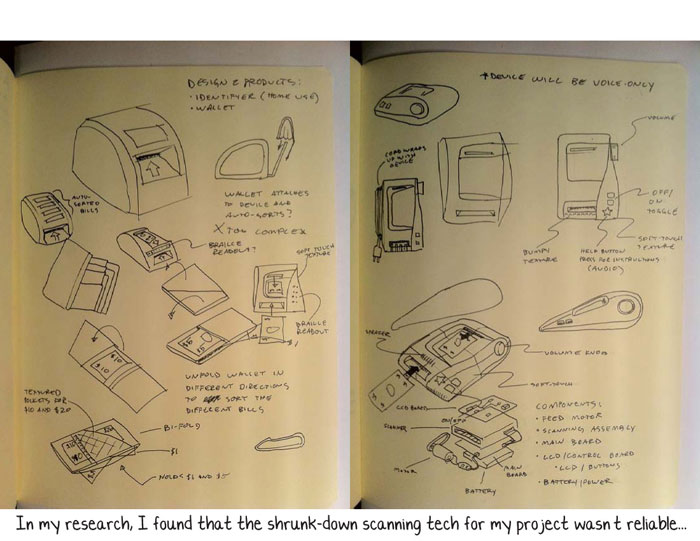 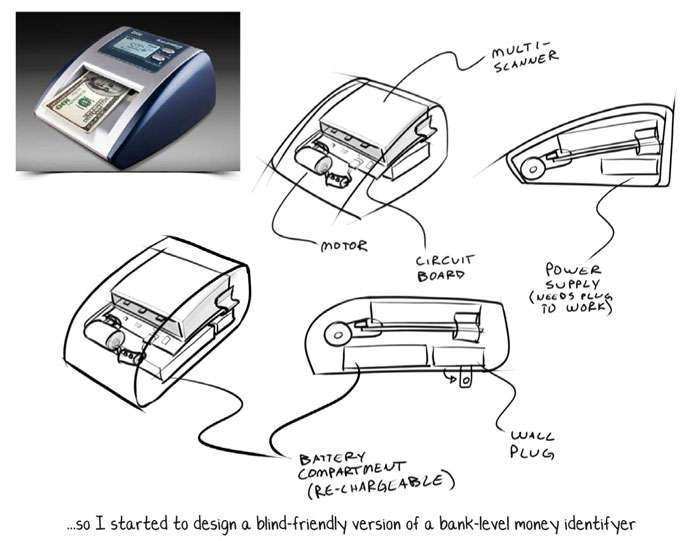 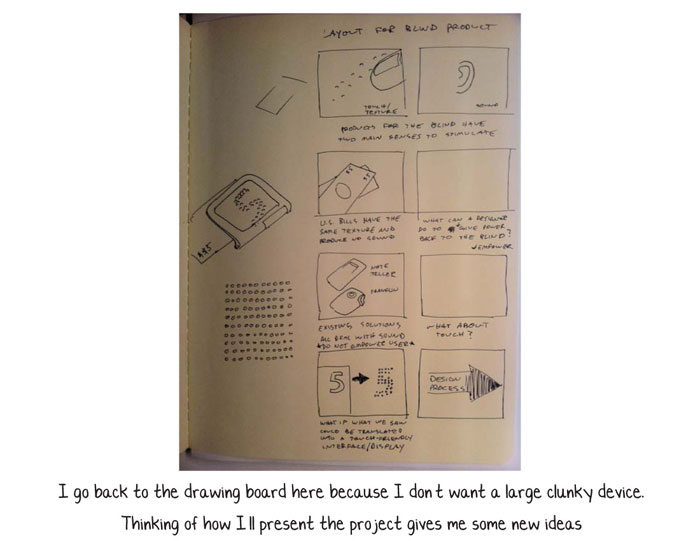 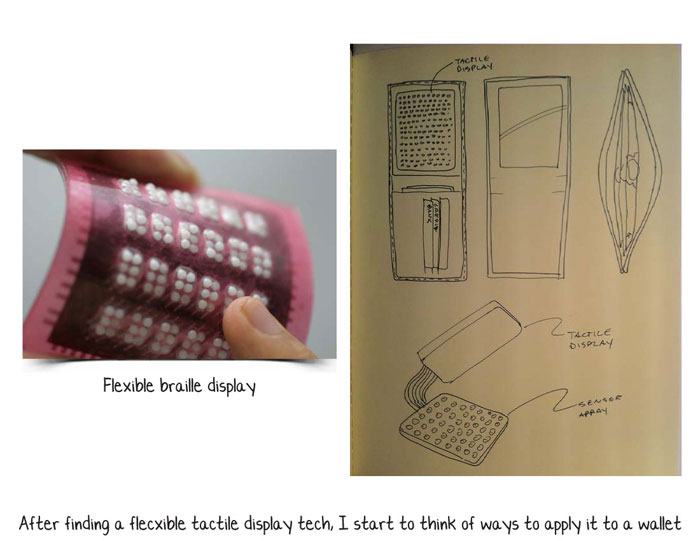 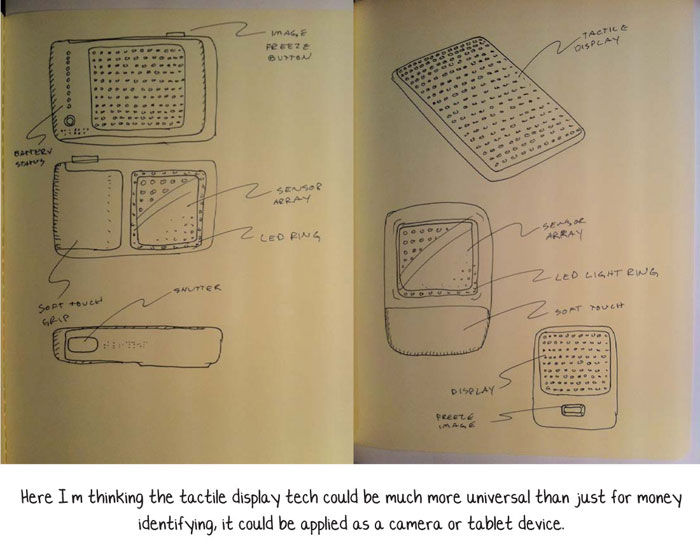 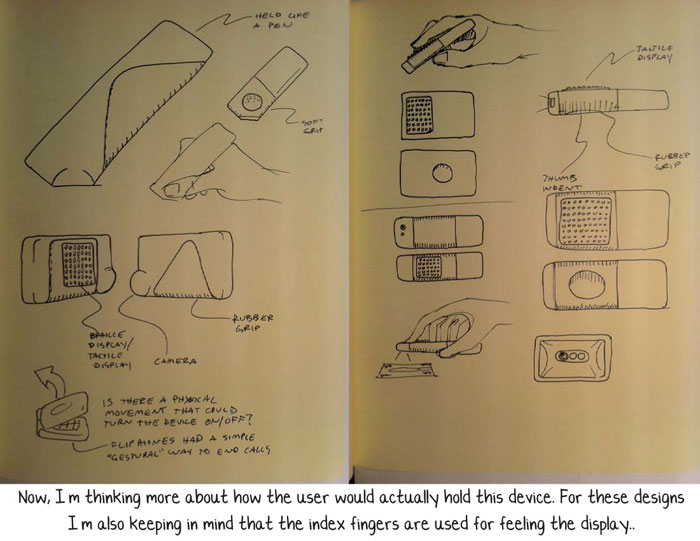 For these models, I was starting to think about existing shapes that would make the product familiar. The three shapes I came up with were, 1) a digital camera, 2) A pen/marker, and 3) a computer mouse. 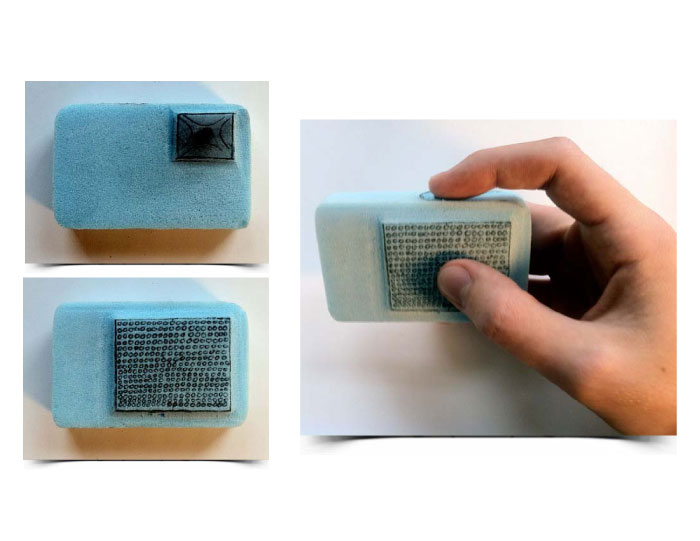 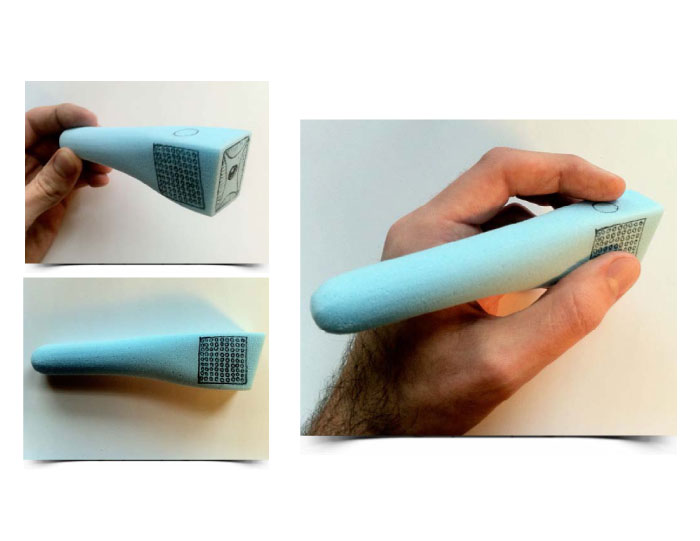 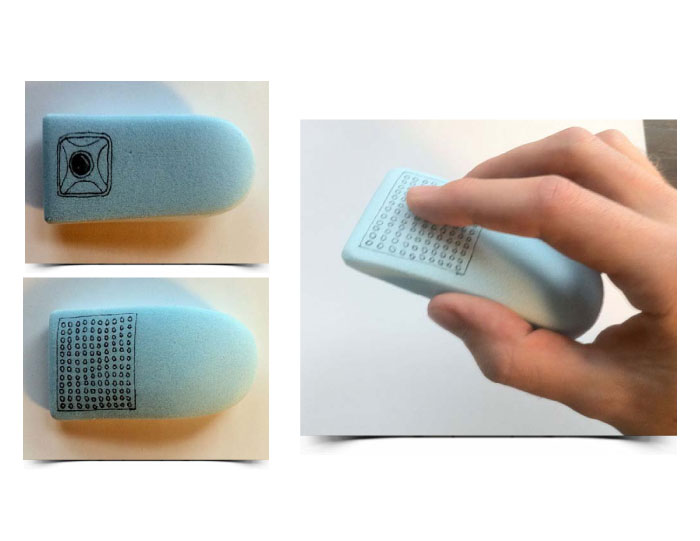 I liked the ergonomics of the pen model and I liked the amount of tactile display surface area that the mouse model had. This model is a sort of combination of the two. 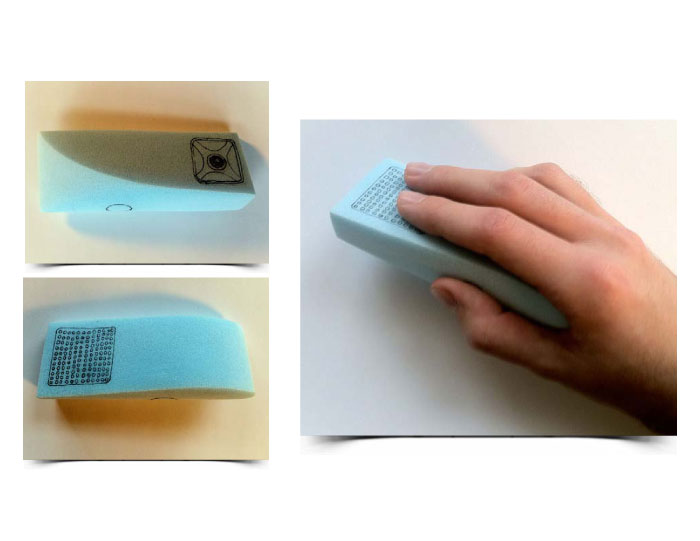 model_4.jpg700×541 34.5 KB
I feel like this is an ideal combination of features, but I think the next steps should be to refine the shape into a more pocket-able device.

Any thoughts or questions so far?

You mean to tell me there isn’t a phone “app” that can read the denomination of a US bill, and “speak” it back to the user?

I’m really surprised a QR code isn’t included on US currency… all currency for that matter.

That’s a good question. There IS an app for iphone which does just this, and it’s something that this product would be competing against. But not everyone has an iphone, and I’m not sure how friendly a touchscreen interface is going to be for a blind user.

The issue I have with any speaking money identifier is that it takes away control from the user. I want to empower users to rely on themselves, and I think that a tactile display is the best way to do that. This device would simply translate visual information (from a camera) into tactile information, and then the user can learn to identify money themselves. The beauty of this method is that it can be used on things other than money, like food labels or pill bottles.

I’m surprised too that U.S. bills still haven’t been changed to accomodate the blind. Even if the bills were slightly different lengths I think that would be a huge step.

A few articles for you here:

Background on ADA vs the Treasury department re: discrimination against the blind.
http://www.health-forums.com/alt-support-arthritis/ada-vs-treasury-dept-57064.html

You say not everyone has an iPhone… very few blind people can read braille. And don’t forget, the ADA also encompasses not only blind, but hard of sight. Those who can still see, but likely cannot read the difference between a $1 and a $100.

You’ve developed some nice concepts, but you’re too focused on braille that will probably be a thing of the past in 10-15 years.

Hey Chris, thanks for the reply.

The whole idea for this project is to not use braille at all! I want this device to only translate visual information into tactile information. It’s almost like a digital camera except you feel the display.

Edit: This is what I’m thinking the display would be showing. The black would be raised dots. 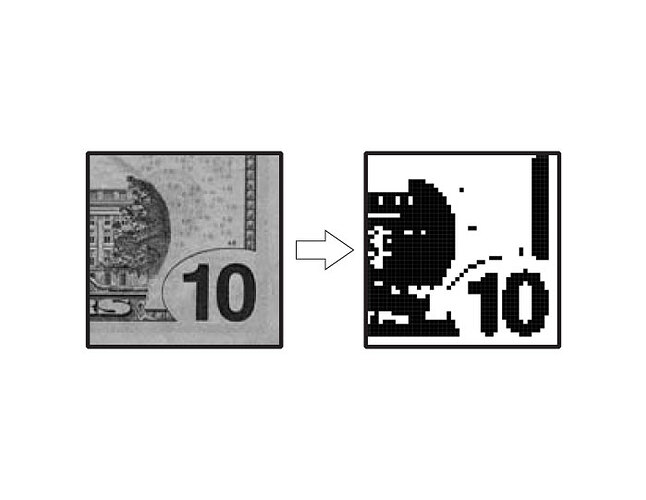 Ok, good angle. However, there’s a few things you’re going to want to consider. Take a look at this PDF, as it dictates the size and spacing of clearly readable tactile copy.

In the UK they make the currency different sizes. The US currency has a lot wrong with it IMO, if someone illiterate, or a non English speaker has a coin it should be a mystery as to what value that coin is.

if someone illiterate, or a non English speaker has a coin it should be a mystery as to what value that coin is. 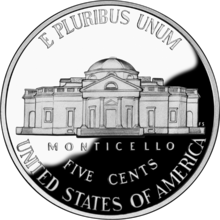 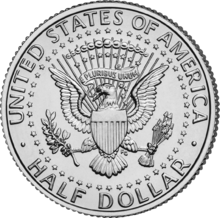 Ironically, the only coin that makes sense (100 cents actually), doesn’t make sense. Why we have a one dollar coin (let alone fifty-cent pieces) alludes me, unless it’s to keep the folks at the Mint employed… I have no use for one… do subways and toll booths accept them (I don’t know, I don’t have to deal with either), vending machines (most now have dollar BILL changers so a $1 coin isn’t necessary). 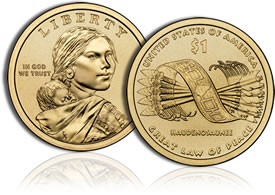 With a $1 coin in circulation, the “understanding” that other coins represent a fraction of a dollar becomes unclear; i.e. if you (e.g. illiterate, or a non English speaker) saw a coin with “5” on it, would you assume that it is 1/20 of a dollar, or $5? But at least The Mint is consistent… … not; the new $1 coin (above) is the only coin to bear a unit of value and the “$” sign (previous coins read; “One Dollar”)

Ok, good angle. However, there’s a few things you’re going to want to consider. Take a look at this PDF, as it dictates the size and spacing of clearly readable tactile copy.

I’m planning on there being a degree of magnification to make reading text easier, and it looks like that PDF will help define exactly how much that should be. Thanks!

I think I’ll have to test out for myself how easy it will be to read different kinds of text (from money, from food labels) when they’re converted into a texture.