Modo 3D Modeling Software...Anyone use it?

I’m trying to get some first-hand info about Luxology’s 3D modeling software Modo. I saw a post about it on Core77’s boards, and the galleries and tutorials make it seem like a great program, but does anyone have any experience with it?

My department is looking into getting SolidWorks 2008 for our more production-based modeling, which is completely fine by me. The only thing is, SolidWorks isn’t exactly known for it’s hot rendering abilities. I’m convinced that Modo’s renderer would be best for nice looking presentation images.

You can get some really nice renderings with PhotoWorks, you just need to study how the program works. It takes a little bit more homework…than others.

any tips for that?

any tips for that?

oh and another thing… will this make rendering time huge? that what tends to happen when i try w/ glass. rendering takes for ever…

oh and another thing… will this make rendering time huge? that what tends to happen when i try w/ glass. rendering takes for ever…

Depending on the hardware and performance of your system…yes rendering time can be lengthy… patience … patience. I would run a couple of quick draft quality renderings just to make sure I’m getting what I want…then I’ll run a final render.

MODO is a fantastic choice!
It is the best modeler sofware I have ever learned.
Its render engine is toooo fast and it is very realistic.
MODOÂ´s interface is really ergonomic and extremely pleasant.
MODO have a 30 day completely functional free trial.
Just give it a try.

anyone give modo a chance yet? this post is a little old so I thought I would make it live some more.

I work for a large eyewear company in NYC. I’m new to eyewear so I’m still learning about it. Anyways, we’re experimenting with what the best 3d app is for us to create 3d prints of eyeglasses and sunglasses. We were leaning toward SW but it’s heavy handed when it comes to modifyability in some ways … it rocks for stability, but if you don’t have something built so that you can adjust this corner or that edge in particular, you may have a lot of work on your hands to edit you master sketches to make things modifiable … I’ve had people ask if I could “just pull that corner up” … well yeah, but it’ll take me an hour or two b/c it wasn’t necessarily built to be changed in that particular way, y’know? Unless you know ahead of time what people are going to want to massage and mess with, it’s just not all that efficient in my opinion. Plus SW renders are just ok compared to modo’s at best. It takes so much knowlege of PW and mental ray that it’s also ineffecient. And I’m familiar with 3dsMax and MAYA with Mental Ray, so … it’s just too complicated to be worth it for us.

We’re used to working with Illustrator to do 2d renderings and technical drawings. Of course you can change a path in a matter of minutes or less than that, really … so we need something that works as flexibly in 3d … enter modo. When I found people doing 3d prints of their work from MAYA, 3dsMax and Lightwave, I got excited for modo’s potential. From what I understand, all you have to do is duplicate you layers and freeze the subD’d meshes and there’s a script on Vertex Monkey that will let you export STL files. We haven’t tried it yet, but I’m confident that it’ll work just fine. We’re looking at an Objet printer, btw.

Eyewear is complex as hell to get right and modo’s been good to us thus far. I’m the only one (of 5) using it as we’re just getting into 3d. I’ve built metal/zyl combo frames (see attached images and modo file) w/ relative ease. I’m not super experienced in modo yet, but have been messing around and watching all manner of tutorial via the web since I heard about it. I finally have time now to focus on it since I think it’ll work for us here. These frames took about 6h start to finish, but I’m sure I could do 'em again in about 45 minutes if I was really hustling based on what I’ve learned. There are a few details missing, but nothing you could see in the render or would mean anything in a 3d print. The renders took about 35s each.

Doing plastic fronts is a different story, but I’m working on a pair of those as well … just trying to get a workflow ironed out.

Anyways, all of that’s to say that I think modo’s comPLETELY viable for product designers if we could stop trying to make it work like Pro/E, SW or Alias b/c it’s not going to. Once you get how the tools work and if you can live w/o parametric-ness and just need it to explore form … I think it fits right in, especially at its pricepoint. Especially good for cars, shoes and more organic things. Product-y stuff can certainly be done, but it’s harder for me b/c I’m still thinking about it like a SWer. I really want to get good at modo though b/c it just feels better, y’know? At the very least it’s awesome for rendering. 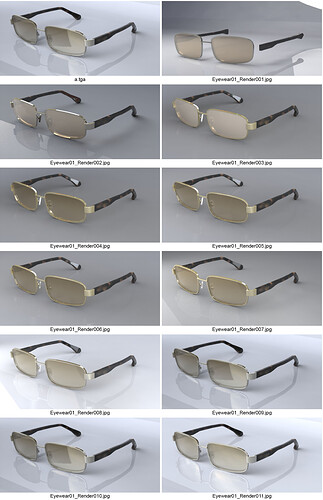 sorry about the double post … i’m new at forums and am not sure how to delete it … my bad!