Hi - I have a weird DIY question that I thought someone in the shoe biz might be able to help with.

I got a pair of these pretty cool mountain bike shoes - the Mavic Chasm:

They have a carbon sole, really lightweight upper, and two hook-and-loop straps with a buckle for the ankle.

Apparently these shoes run almost a full size large, because I’m down 1/2 size from normal (8 to 7.5) and still experiencing heel lift, which is unacceptable.

The heel cup in these shoes is something called ‘energywedge’ or whatnot, meaning instead of a whole plastic heel cup, there’s just the ‘perimeter’ of it: 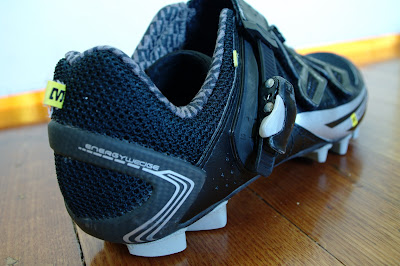 Whether its the design, or the shoe fitting slightly large, that’s the problem, what I’d like to attempt is to take up some of the extra space in the shoe, pushing my foot back into the heel cup, and presumably stop the heel lift.

Bike shoes aren’t very substantial, and are intended to fit snugly, but not put your feet to sleep like a racing ski boot etc.

My question to you shoe designers is: if I was going to add material to the inside of the shoe (where my foot goes), to solve the heel lift, would I do it under the tongue, in the heel area, or some place else? Or, am I screwed and should just buy the 1/2 size smaller?

You can try adding a thin insole to it. That would reduce overall volume and probably work. Try a 2mm piece of die cut Eva.

Insole is your best bet, anything else is going to cause serious discomfort through friction or restricting movement or adding odd pressure.

Have you had a carbon sole shoe before? They’re crazy stiff, and if the heel slip you’re feeling is from walking around I’d go so far as to say that it’s normal…

Heel slip on the bike, however, is certainly something you don’t want.

Thanks for the suggestions guys. I’ll try a thicker or additional insole to take up space.

NURB - I haven’t used a carbon soled shoe before, and it is WICKED stiff, which is part of the appeal. Its like literally adding 5 watts per pedal stroke. The heel slip is felt mostly in walking around, but as I got the shoes for cyclocross racing the slippage is more annoying than usual.

but as I got the shoes for cyclocross racing the slippage is more annoying than usual.

Understood. The only one’s I’ve seen that don’t slip too much are the Sidi Dragon 2’s with the adjustable heel lock.

The only one’s I’ve seen that don’t slip too much are the Sidi Dragon 2’s with the adjustable heel lock.

So true. I’m not sure why I even bothered trying another brand/make of cycling shoes. Sidi shoes have not changed substantially in the past fifteen years, and for good reason. I’m still using Dominator and Genius shoes from ten years ago; they simply will not break down and go away. The Dragons are super expensive but the price-per-mile over time must be fractions of a cent.