modeling the rear surface of iMac 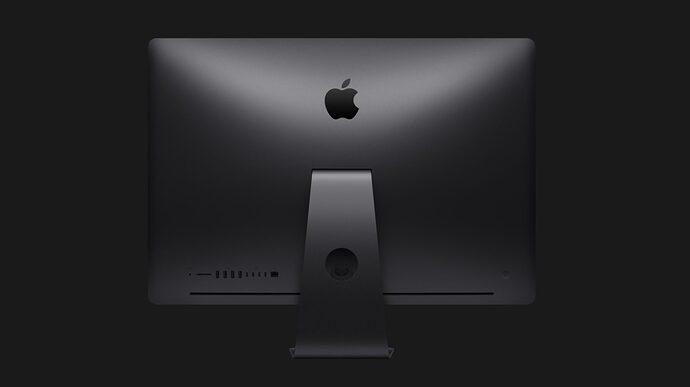 Ever really check out the rear surface of an iMac? It tapers in all directions, down to quite smallish corner radii, without really obvious kinks/curvature. The above photo exaggerates what you see in real lighting. How would a surface like this be accomplished in SolidWorks? Can it be done in SolidWorks?

I racked my brain a few years ago trying to model a similar surface in SolidWorks, also a display, made by a different company. None of the methods I tried gave me what I was hoping for. The resulting surfaces from SolidWorks didn’t have enough information to edit them, or intersecting the corresponding surfaces resulted in edges that were inconsistent with the part I was trying to recreate.

Ah, the “pillow” shape, a classic. There are many ways to do it, the one on the iMac most likely done in a “proper” surface tool like alias. It can be done in any software that has surfacing capabilities and can conrol G2 Surfaces. I’m not using solidworks as my main tool right now so can’t tell you the specifics but here are some good hints at how the nurbs patch layout should look: Alias Tutorial : Advanced Sculpting
There are also a couple of “hacks” to do it with a patched surface that usually looks ok enough for prototyping and rendering but falls apart if you want to use it for anything else and offers little control over curvature.

I have had surprisingly good results using the surface fill tool and let SW do a lot of the calculation.
Just make sure your profile is CC and you have good guide curves to give you the pillow.

But of course, if you are beholden to tight components constraints, then yes, you’ll probably will need a more complex tool such a Alias.

Thanks to all. What’s great about the iMac back is how well it hides the mass of the internals, as it tapers to that uncanny thin edge.

Mrog that’s a nice tutorial. I’m not too familiar with Alias but the simple mono-rail exploration surface almost looks like simply a ‘Sweep’ in SolidWorks. As long as the parent section curve is nice and smooth it could result in a decent starting surface, or as a reference as the tutorial describes.

This is just for prototyping at the moment so I can get away with fills and patches, as long as they don’t blow up in CNC programming. I have some wiggle room for the outermost border

Will try to provide as little info as possible to the Fill tool and hopefully it calculates a nice result.

Thanks for all who replied.

Apple does all their exterior surfacing with Alias, more than likely this is a single span surface with the CV’s in the middle pulled out to plump it up. Getting that single surface to line up nicely in the radiused corners is usually the tricky part, but because the parting line is inset I think they probably have a cheater surface that might not be perfectly G2 to make it line up with the flat profile of the screen.

I came up with two different ways of going about it in SW. The first is quick and dirty with the Suface Fill with guidance surfaces that mimic that “flat” portions that the highlights reveal along the outboard top and side areas of the display. This result reveals pretty good zebra stripes, but I’m always hesitant of such large Surface Fill features. On something smaller or with a heavy texture, this would probably be alright.

The other option is to build off the Surface Fill and split everything into 4 sided patches and use a layout similar to the above linked Alias tutorial. I did spend much time massaging the curves and there are some issues with my zebra stripes that would need to be addressed. However, I think this would be the superior option if you had to rebuild this perfectly in SW.

Both SW models can be downloaded from this link: Dropbox - imacPro_SW.zip - Simplify your life

@Lowe9
I grabbed your models. That’s fascinating. I think that’s a pretty good interpretation. I really like how you made the trim from the corners to the central ‘tangency reference’ surfaces.
Slightly off-topic: is making those ‘tangency reference’ surfaces really superior to simply selecting ‘normal to profile’ when making lofts or boundary surfaces? I get why that won’t work for Surface Fills.

Slightly off-topic: is making those ‘tangency reference’ surfaces really superior to simply selecting ‘normal to profile’ when making lofts or boundary surfaces? I get why that won’t work for Surface Fills.

IIRC, there shouldn’t be a difference using “normal to profile” when doing symmetric parts- I believe using “normal to profile” still gives you access to the “tangence influence” slider when using profiles in both directions. You usually want to increase this to 100% on the symmetry profile to help better “puff” up the surface, otherwise you can potentially get dimples or ridges when you mirror. I’ve gotten into the habit of creating the reference surface from years of modeling swoopy plastic parts. Using the surface extrude you can add draft to your reference surface (turning it into a “draft reference” surface) allowing you to build draft directly into surface features that terminate at the parting line.