Trying to keep myself busy while looking for work so I’m giving myself design projects.

A sharpener is an essential tool for any knife to have. I wanted to try to integrate the sharpener into the knife somehow. I think this would be more convenient than having to look for a seperate sharpener. Another reason for pursuing this project, albeit a more selfish one, is that I move from place to place quite often, and the less stuff I have to keep track of the better. If my sharpener and knife were in one place, that would make it easier to keep track of these items at least. My target consumer would be a person who’s independent and enjoys cooking. When he or she cooks, it’s almost as if they’re reaffirming their independence. They don’t want to rely on eating out all the time, they want to enjoy a home cooked meal.

So two possible solutions I’m messing around with is the idea of a knife cover that doubles as a sharpener, or integrating the sharpener into the handle as a detachable unit. I like that the knife cover allows me more freedom in sculpting the handle, but I don’t like the idea of seperate pieces because it defeats my original intent. I like the detachable handle, but fear that I might be complicating the process.

I am in the very early ideation stages of this project so I want to get feedback so I don’t commit to early to an idea, only to find out later that it’s not feasible. 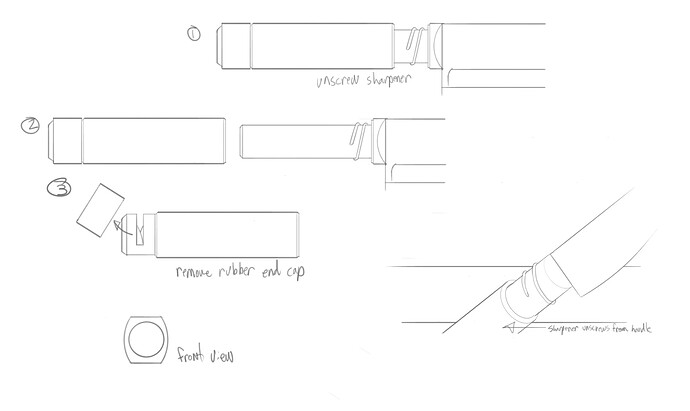 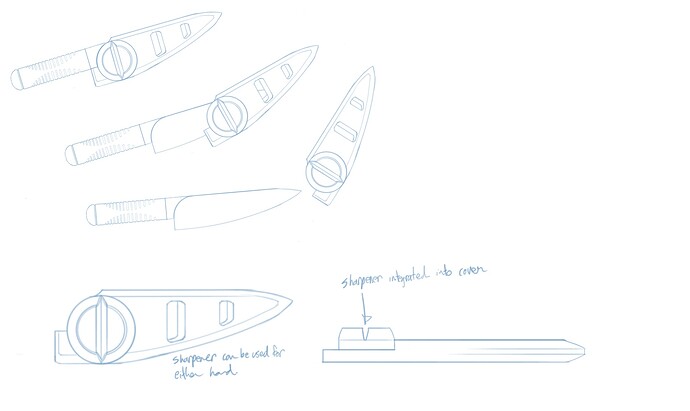 Images aren’t working, but I’d be interested in seeing what’s out there on the market. I think you should do some research on the available types of sharpeners.

[u]Then and than…[/u] The words sound almost the same, their meanings are not.

I’m not seeing your images either…

I would be leery of a knife handle that “comes off”. I like to know that I have control over what I am cutting, and the thought that the handle may come off of my 14" chef’s knife isn’t too comforting.

There are two kinds of sharpening devices. Steels are preferred by professionals but require the proper technique to sharpen blades correctly. The other kind of sharpener simply requires that you slide the blade through the ceramic or steel composite blocks against one edge and then the other. The advantage of this sharpener is that it is more convenient and saves space. Attached are pics of both sharpeners. 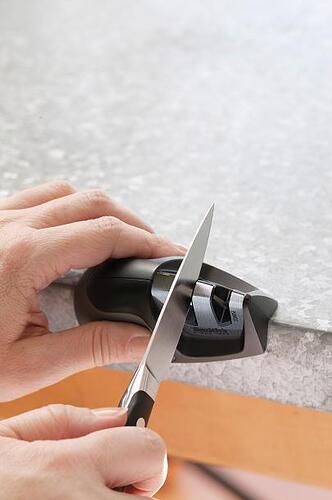 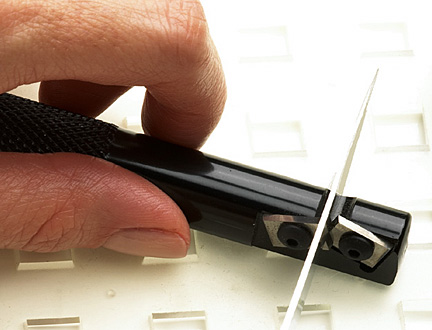 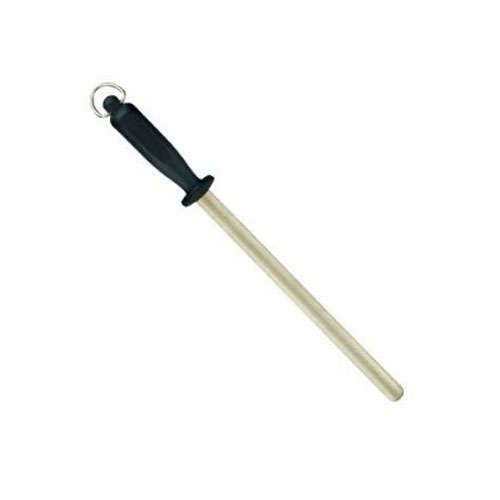 Aren’t you losing a lot of grip area from using the handle? Also with number 3, how are you going to sharpen the knife if the sharpener is at the end of the grip? Disconnecting the blade from the handle will have (dangerous) implications. In a wet environment, having a grip on blades is important.

I think a “Coring” idea might work though, where you unscrew the end cap and instead of the whole handle coming off or half of it coming off, only the core of the handle comes out. That way you still have a grip on both the knife and the sharpener.

Who keeps their knives in covers when they’re at home? Most people have knife blocks/magnetic thingies.

They already have this.

Google Wiltshire Staysharp. The cover is a sharpener. They are cheap knives so don’t work that well. I remember we had one in the 80’s.

I’m becoming less convinced that this knife/sharpener in one is the way to go. Maybe I need to look into this idea of being able to move your kitchen tools more easily from place to place.

Who’s your target customer here? If it’s professional chef’s, extensive knife pouches/bags already exist (and they would prefer steels to hand held sharpeners). If it’s your average home cook, where would they be taking their kitchen utensils?

what’s up, glad to see you’re keeping busy and getting into some other product categories.

I think Nurb is asking some good questions to help you focus on a truly valuable solution. 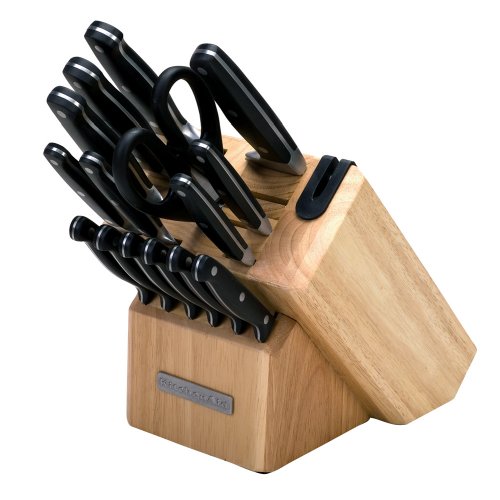 Who’s your target customer here? If it’s professional chef’s, extensive knife pouches/bags already exist (and they would prefer steels to hand held sharpeners). If it’s your average home cook, where would they be taking their kitchen utensils?

He stated in the first post: My target consumer would be a person who’s independent and enjoys cooking. When he or she cooks, it’s almost as if they’re reaffirming their independence. They don’t want to rely on eating out all the time, they want to enjoy a home cooked meal.

But it’s very vague and I think if someone enjoys cooking and is independent, they’d definitely invest in a good set of knives.

By the way, I did a chef bag project a while ago: CMU student design project: Chef's travel bag - Core77

Maybe will help guide you in certain directions?

I think I’m trying a little too hard to come up with a revolutionary idea when a simpler one will do? Thought about it, and it seems that this knife/sharpener in one idea is going to just be an idea.

Maybe I should use this as a visual language exercise. Develop a line of products with a consistent look?

Tarngerine, I saw your concept awhile back and I really liked it.

Excuse my somewhat ADD design blurbs, I’m the kind of person who prefers to have a design brief created by someone else. I find the most difficult part of self initiated products is creating the brief. Thoughts how what I can do about this would be appreciated haha!

Thanks for the feedback everyone, now that I’m out of school, core has become an exponentially more important resource!

now that I’m out of school, core has become an exponentially more important resource!

I think it would difficult to find a more immediate source of feedback than C77.

Here’s and idea … the most frustrating thing in our kitchen is DC … Drawer Clutter.

Big knives, little knives, knife steel, clever, big cooking spoons, little cooking spoons, scrapers, spatulas, cooking forks, tongs, garlic press, graters, egg timer, thermometers … you name it. I finally had to resort to fabricating a one-piece plywood “divider” for each category of utensil, that fits into the top drawer. It was done is a hurry, and it looks like hell, but life is so much simpler not having to dig around for a particular instrument.

Common shuphrk88 … ya don’t get off that easy!

What are you kickin’ around now?

As far as self-assigned design briefs are concerned…

I have a number of product areas that I wouldn’t delve into, notably cellphones, but that’s my cross to bear

Haha, don’t worry man, I’ll get back to this. In the middle of some job interviews, so my personal projects will have to wait for a little while.

I did recently go to Bed Bath & Beyond to look at some housewares. Took lots of pictures so when I get a chance I’ll look them over.

I’d add “choose a target consumer” for a self assigned design brief… preferably a market that you don’t fall within,must learn about, and specifically target

I’d add plastics cupboards (Tupperware etc.). Everything gets thrown in and the door slammed so it all doesn’t fall out. Can never find lids.
(renovating my kitchen at the moment)

The red dot award books have great sections on kitchens. https://secure.red-dot-store.de/en-oxid/Bookshop/red-dot-edition-catalogue/red-dot-design-yearbook-2010-2011-Vol-1-living.html though the website doesn’t have the same appeal

Thanks for the advice everyone, soon as I finish some things, I’ll look at everyone’s responses in detail!