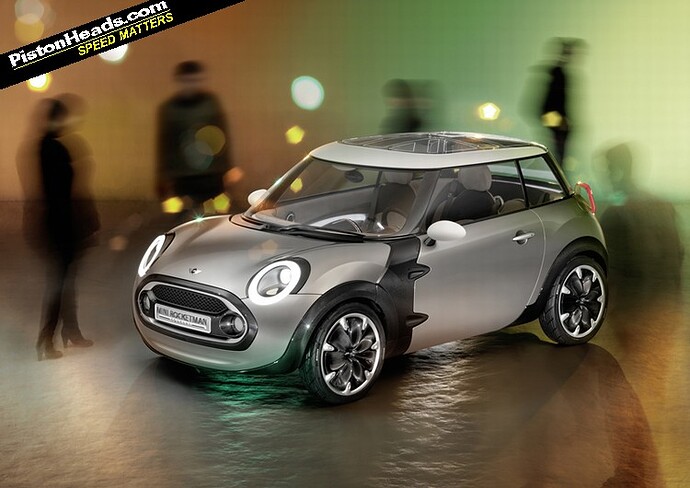 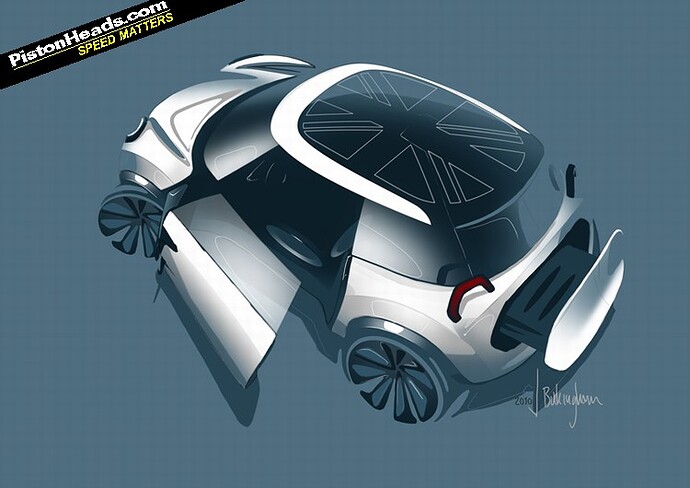 The name is great: Elton John - Rocketman (In Think It´s Gonna Be A Long Time). - YouTube

Some of the details intriguing. A little toy-ish in these shots, but the best
is the carbon fibre chassis. Finally. Some future.

The translucent Union Jack, so cool: 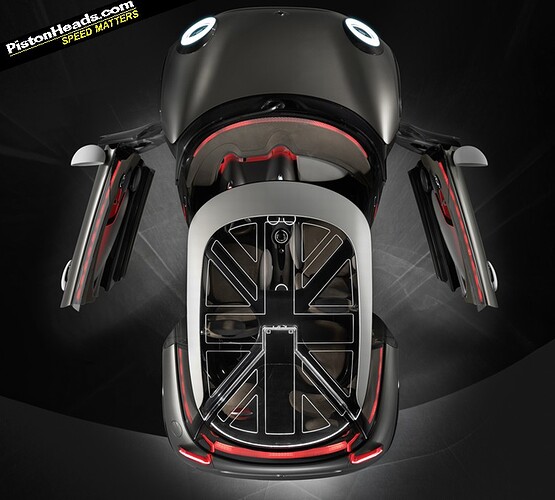 The door looks a bit complex, but the design makes sense for creating easier entry.

The roof is just awesome!

Love the tail lamp sticking out of the form. I get the feeling this could be a detail we start seeing on smaller cars?

Is that a drawer for trunk? Very interesting. I wonder if the design was driven to give structural strength in the rear, eliminating the hatch design.

Most of all, I love the fact it’s small. I saw the new models and concepts from Mini at NAIAS this year, and while they look great, I’ve been hoping for a smaller car from the brand.

This is just a concept. Sources say that Mini is starting the redesign and that they are going to try to break the mold they’ve made inside and out.

I think the overall stance and shape looks pretty good. I really like when I squint past all the errant cut lines and material breaks.

What’s up with the double hinge door?

Agree with Brett. I think this is a nice peak at the next Mini. Minus all the show car stuff (weird door hinge, handle bar tail lamps) and it is still a nicely proportioned vehicle with some nice surfacing. I’m really liking the face of it. It will likely need a lower grille to feed the engine with enough air, but that is easy enough to imagine. The grille assembly is working for me.

Etched uniojack in glass is awesome.

I like the translucent Union Jack > above everything else

Huh… ? Where else would you put it? Of course it’s above everything else… . it’s on the roof.

Finally someone saw the light. Afterall, the name is MINI… …

The door looks a bit complex, but the design makes sense for creating easier entry.

Something that I can appreciate; as large as the doors are on our CLK I still have to scrunch up to get in it.

And yes, I too like the UJ on the roof; very much way clever. And the stylized rendition of the MiniLite wheels as well.

What’s up with the double hinge door?

So you don’t have to suck your feet up under your chin to get them into the foot wells.

I’m thinking that the door hinge design allows the driver to swing his legs in easier, and it looks like double hinging might reduce the chance of the door swinging too wide and hitting the car next to you in a small parking lot? Maybe?

The 2001 Renault Avantime had double hinged doors to ease access to the rear seats. From Wikipedia:

To facilitate access to the rear seats, two long doors featured a double parallel-opening hinge system (marketed as “double-kinematic”) that maximized access with minimal outswing of the doors.

Always loved the Aventime… and they did the double hinge without the odd extra panel. Renault has some fantastic concepts in the early 2000’s. 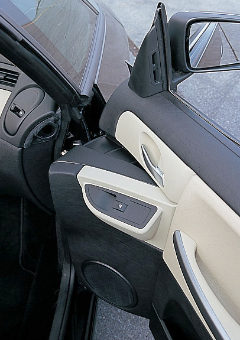 I don’t think the Avantime’s hinge would work on such a small car as the mini as it seems to take up too much of the interior space and the door it self is pretty fat.