I’m at a loss for words. Sort of gagged when I first saw this, but part of me kind of likes it despite its blatant irrelevance. It’s like an Elseworld’s Mini. I can’t really tell how big it is either. I’m curious to see what it looks like with doors. 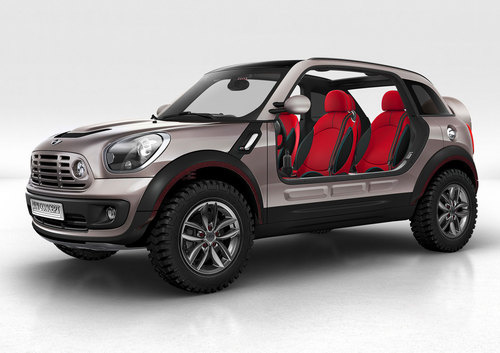 I think there is something strangely interesting about this, a Mini on steroids. Its not a bad concept but it definitely needs some refinement. I’m not really digging the grill design it looks like an old truck hood with two bulbus lights/fenders grafted to the side. And what’s up with the back gate/ tire cover? Its hideous. Not to mention the red trim on the flares or the pointless Mini logo in the upper brace.

I’m guessing from the size of the seats that this is only a little bit larger than a regular Mini, but its hard to tell without a real reference of scale.

Is this actually going into production?

If so, how many… a dozen total?

There is a Mini crossover coming out. I’m guessing that if you cleaned this up (put a normal grill on, some full size doors, took off all of the extraneous blips and indents) you would have the production vehicle. I think this falls into the category of “concept” cars, where they gussy up a production car ahead of release to get people all excited. The Clubman had a concept version as well.

I think it looks great myself. Obviously some room for improvement, but it’s pretty cool. Almost looks like it could be on the X3 platform…

I love the renderings. I wanna print them out and frame’em. 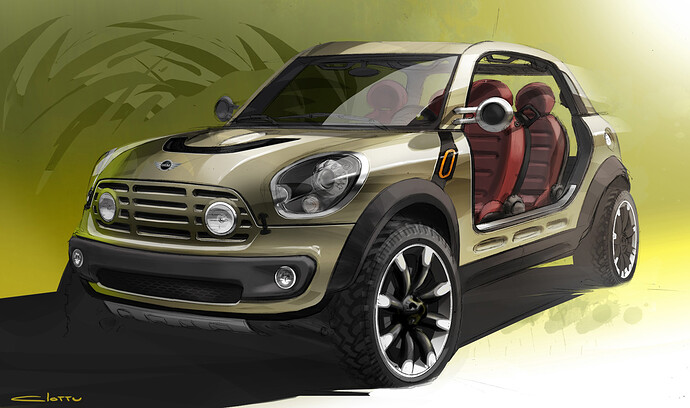 Just to clarify, I never said I didn’t like this little guy. I actually quite like the look of it so far. I’ll take one and add a larger supercharger please.

What I meant to say is… can this car/truck/dunebuggy survive? Are there really enough people out there who have the cash and the interest to warrant going into production?
I can’t see the brand pushing this out to market to essentially compete against the Wrangler.

Maybe a limited edition run, similar to the ISUZU ‘ironman’ SUV thing from some years back?

Maybe the volume sales for this model are headed for Qashqai territory where traditional 4x4 properties are enjoyed , but with a more urban 2wd practicality ?

…oh , i just saw the 2010 crossover that’s coming out - i guess that’s the volume model I 'm speaking of then!

Just to throw a damp towel on this little cutie … what is it for? I hate myself … always the pragmatist.

If it’s for dune busting those days are numbered for sure, thanks to the likes of the Sierra Club and the snowy plover. I live next door the the Oceano Dunes; the only place in on the Left Coast with a drive-on beach and access of sand dunes. Due to the wind blown silt thrown into the air, and the number of personal injuries, and fatalities (3 this year) it will be closed in a couple of years.

It has a certain je ne sais quoi that I like, but really, who’s driving this thing, and where. It had better be a warm climate for sure; SoCal, SoTexas, SoFlorida, the SoCarolina? My dad and I built the first Meyers Manx licensed in Indiana in 1969; it was insanely cute with a fiberglass top and canvas side curtains. And insanely cool, especially when the thermometer dropped below 40F.

Is it just me, or are the driving lights represented as being canted outboard. The left “ellipse” is definitely not perpendicular to the centerline.

Is it just me, or are the driving lights represented as being canted outboard. The left “ellipse” is definitely not perpendicular to the centerline.

I think this may be a mini styling cue as I found this was one of the most noticeable elements of the subtle redesign that the 2nd generation (current) mini introduced. It appears that the headlight elipses were tweaked to be more outward looking, giving the new car a squatter appearance…they shifted the belt line up a bit too if I remember rightly.

mini is just continuing the mini revival thing…
i’ve recently seen two mini moke in perfect condition, because there’s no doors,
they appear lower than they really are.
about 50,000 of the first mini moke were made: 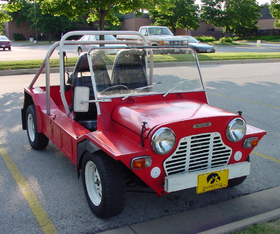 The Mini Moke is a small, front-wheel-drive utility and recreational convertible, manufactured and marketed originally by British Motor Corporation (BMC), and subsequently marketed under the Austin, Morris and Leyland brands. Designed by Sir Alec Issigonis and John Sheppard, the Mini Moke is known for its simple, straightforward, doorless design, and for its adaptability. Originally prototyped as a lightweight military vehicle using the engine, transmission and suspension parts from the Mini... 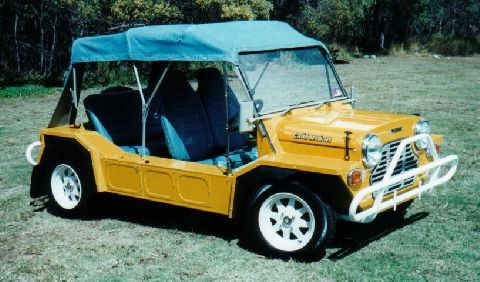 This image shows what they are going for. I think the brand can handle it. This said, I think this particular design is a train wreck of surface ideas and treatments all thrown on top of one another. It doesn’t resonate as a cohesive whole for me. Instead it feels like it was designed in bits and pieces. There are a lot of nice little ideas and touches… just too many of them. Not a fan. 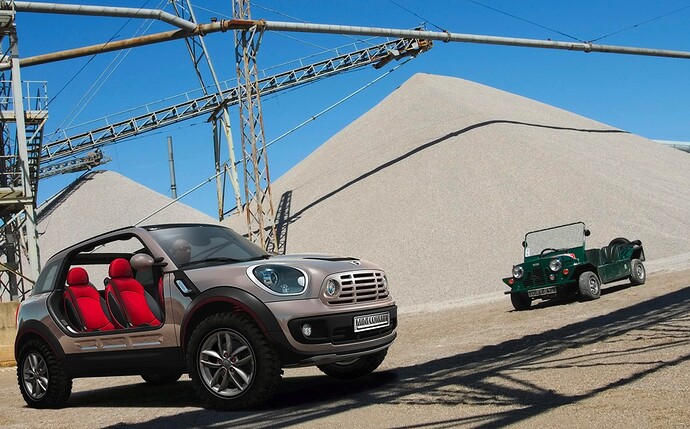 a short interview of the car’s designer Gert Hildebrand:

Production version looks really good, better than the concept in this case!

Would be an excellent vehicle for jurassic park. Minus the T-rex accidents, of course.

Is it wrong that I’m starting to like this SUV Mini more than the Clubman?

I like it a lot as well, since it is taller, it retains more of the proportion of the regular so I think it just resolves a little better. I have the larger, 18" (the largest you can get without putting spaces in) 5 spoke wheels on the Clubman and I think it looks a little off with any smaller of a wheel size.

I like the roof line of this crossover a lot, it is a little cuter looking, in a good way.

Test drive of the Mini Countryman via TopGear