I just saw the product video for the Microsoft Surface Studio that just got announced. I’ve been impressed with their incorporation of tactility and movement in their Surface products. The magnetic/wireless knob seems like a cool feature, but I guess I’d be a little concerned that I’d crack the screen on such a big piece of thin display glass. Looks pretty cool!

It looks like a nice piece of hardware, but I’d have to play with one to be sold on it being better than a Cintiq (function wise) for the design professional, especially since I can plug a Cintiq into a Mac or PC based on my platform of choice.

I have a regular Surface Pro 3 that I really did not love the pen for sketching. I’m more interested in the Wacom Mobile Studio Pro as a tool - it seems like something that could better fit into the workflow that most of us already use. $name

Pretty sick. That base must be a solid chunk of steel billet in order to keep the screen in place! I like the chrome support arms too.

Overall a negation of ‘industrial design’ with the matte gray finish, next-to-nothing overhangs on the keyboard and screen, and rather crude knob. The knob doesn’t feel like it families well with the mouse.

Like many of the peripheral buttons on a Wacom I feel like I’d be trying to find uses for the knob, but I suppose since the screen itself doesn’t rotate you need some way to rotate the image.

How long do you think they had to argue about the final resting angle of the display? Vs totally flat.

What sold me on iPad Pro vs Surface 3 was the pen response - second to Wacom but in a better package. The pen experience would have to improve for this product to be a consideration.

Wondering about the rest of the specs of the machine itself.

I am very glad Microsoft did that and I am praying that it is good. We use many wacom products at work from many categories and I always HATED them. They perform fine. They do what they are made for. But that’s about it. You can literally feel that they are the industry standard and are unbelievably lazy because of it. Just look at their cheap plastic housings, the detail, the clumsy ID, the cheapo plastic pens with wiggly buttons ugh…
I won’t complain because someone else bought that stuff for me/us and they do what they are supposed to do - but exactely that SHOWS. A proper cintiq runs you several thousand dollars. No consumer would shell out that amount of money for that pile of rubberized plastic.
Their tech is probably still better but I hope Microsoft just kicks their butt with their superior user experience.
Ever held the cintiq companion next to a surface? In direct comparison the companion feels like something out of the 90s.

seems pretty niche for MS. I think Wacom works because you can put any hardware you want with it. I have always paired my Cintiq to a laptop so I can take the hardware with me and I tend to upgrade the laptop a lot more than the Cintiq. I think it makes more sense to divorce the input hardware from the processing hardware.

I wonder who the intended users are for this and how big those markets are. I wouldn’t think the portion of designers who would adopt this (10%?) could solely sustain a business case for a product of this magnitude. Don’t forget most designers, whether at a firm or a corporation, have most of their hardware decisions made for them. To be successful with designers at companies and firms of larger than say 50 people, MS would have to appeal to purchasing decision makers.

Other than all of what I just said, it is pretty cool. Just doesn’t fit my work flow.

I like it. Looks nice and has a few nifty things that aren’t currently available with anyone else. However, it seems pretty expensive (even compared to Apple) and uses old mobile graphics cards. Considering the mobile versions of Nvidia GPU’s are nearly equivalent in performance to full size PC cards I think this would have been awesome opportunity to give a really good solution for gamers.

Copy of the specs from Gizmodo

I like the guts it takes to run full force into the Apple/Design Industrial Complex. MS is getting serious about hardware! I’m glad because competition can only improve some of the clunky legacy elements of Wacom, Adobe, Apple et al.

I love the knob idea. It reminds me of Alias marking menus, but in a physical sense. When I’ve used a Wacom, I felt that getting the arm-to-hardware angle that I want was harder than it needed to be. This makes it look easy. I like the color dial too. Plus, it’s a Windows box. If I were to start a business tomorrow, I might buy these for the design team so that I don’t have the graphics Mac v. CAD MS divide.

Having said all that, yes, we have to wait for some reviews to know if MS sweat the details…and that is where the devil lives!

A coworker of mine, and long time Mac user, blurted out after watching the video “That’s it. I’m in. That’s the machine I’ve been waiting for.”

He uses illustrator primarily for technical drawings (as do I) and this would fit my workflow perfectly. I think anyway…

What amazes me, is that this is exactly what many have been asking and expecting Apple to do for a long time now, and it was MS that did it. Couple that with their Win 10 updates, and it’s pretty exciting.

A coworker of mine, and long time Mac user, blurted out after watching the video “That’s it. I’m in. That’s the machine I’ve been waiting for.”

He uses illustrator primarily for technical drawings (as do I) and this would fit my workflow perfectly. I think anyway…

What amazes me, is that this is exactly what many have been asking and expecting Apple to do for a long time now, and it was MS that did it. Couple that with their Win 10 updates, and it’s pretty exciting.

Not to be sassy, but in terms of actual workflow - does this really change the game compared to a 27" Cintiq?

The build quality is obviously much better, and the screen resolution and specs for an all in 1, but it seems like if you were used to heavy pen input, the form factor of the big Cintiq is nearly identical, and they have that express key remote which given their longstanding ties into the workflow will probably work much better with most tools since Wacom functionality has been built in for years (vs the MS knob which probably requires all new API’s and software to work correct)

Another thing which I think is a HUGE miss that won’t be apparent till someone buys this and starts using it - they appear to have gone with a glossy screen.

If you’ve used a Cintiq you’ll know even with the matte coating, tilting it down instantly brings out all the reflections of your overhead lights. If you’re like most of us who work in any kind of office with overhead fluorescent lighting, or near windows - that can be an absolute deal breaker. The anti-matte coating doesn’t look as good for colors, but it serves to drastically cut down on those reflections as well as smudges and fingerprints. There may be some hidden anti-glare coatings, but its hard to tell from any of the photos which make it look very glossy. 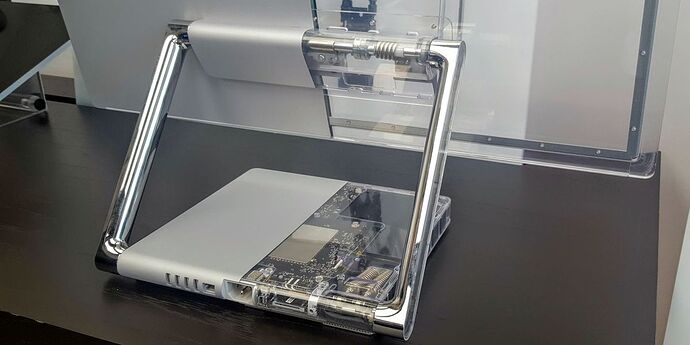 The Sophisticated Springs Behind the Surface Studio's Coolest Trick

That movable screen is no joke.

I like the guts it takes to run full force into the Apple/Design Industrial Complex. MS is getting serious about hardware!

I played with one of these Studios today and it is super cool. I was told the resting angle in the downward position (much like the slight angle of my Surface Book at rest) is to mimic a physical artistic surface for drawing - I like it.

To those who’ve relayed your experiences with the Surface Pro 3 (not liking the pen) you should try a Surface pro 4, a Book or this Studio - the pen is just about perfect now - I came from Wacom-love like all of you (Wacom tablets (I had the very first model over 15 years ago), then Toshiba Tecras, then Samsung Note Pros) so when I saw that MS abandoned Wacom for N-Trig, I thought they’d taken the wrong road but now I see they ripped up the road and re-paved it…they made an NTrig out-Wacom a Wacom.

I see the target disciplines as architects, graphic design, ID and some of the fray-types, like sign shops, etc. The dial is really cool, but limited right now in the software that it works with - once they get it working with SW, SBP and others it’ll be an awesome value add for workflow.

I also really love the new take on 3D via their WindowsPhone capture - juvenile in this first iteration and definitely not serious 3D, it’s a great advance for 3D-for-all.

Glad to hear the Surface 4 isn’t as clunky pen wise.

All competition is good news. If MS can out Wacom at the hardware and pull the software integrations in then it’d be great. Wacom is certainly stepping up their game with new products as well, so maybe they’ll decide to make a stronger investment in their ID for future generations.

Love this time of the year when new stuff comes out, speaking of things you can sketch on, I wanted to mention this guy since I think no one has:

I was mildly excited about it( digitizer + pc + analog in a portable ff) , but reviews have been less than kind.

I was excited reading about this one, too - what a fresh take on sketching; it’s digital, it’s analog, it’s both all at once but right there on-screen at the same time. Unfortunately, it looks like they used low end guts to keep it simple - I think it only has an atom processor and limited ram? Looks like something perfect for comic sketching. This guy will probably give it a review; http://surfaceproartist.com/

He uses illustrator primarily for technical drawings (as do I)

Very well done by Microsoft. As Keno noted, this is certainly a halo product. Other than if you have a use for a very high end screen with direct pen input, you’re not getting a lot for your money. With that said, it’s certainly a nice option vs the 27" wacom cintiq which is almost the same price, a much lower resolution and obviously doesn’t include a full computer.

I think Microsoft’s strategy is paying off on the Surface line and by extension Windows 8 to Windows 10. The premise was fairly simple, merge a tablet with a laptop and bring pen support to a much broader user base. The original Surface RT and Windows 8 which tried to bring touch to the desktop environment were certainly business failures. But a lot seems to have been learned and the current Windows lineup sure looks like a good proposition for a lot of people.

What creatives think of the Microsoft Surface Studio | Engadget

I like the guts it takes to run full force into the Apple/Design Industrial Complex. MS is getting serious about hardware!

In my defense, I’ve touted Microsoft design for some time, all the way back to the Natural Keyboard in the '90s.