What are peoples thoughts on the new Surface tablet?

The comments about it seem to be pretty positive and it seems to be more of a notebook replacement as far as I can tell rather than an ipad competitor. To me it seems like it could be a lot better content creator than the ipad is and be a lot better for sketching too with an i7 processor and A4 size along with the fine point stylus . 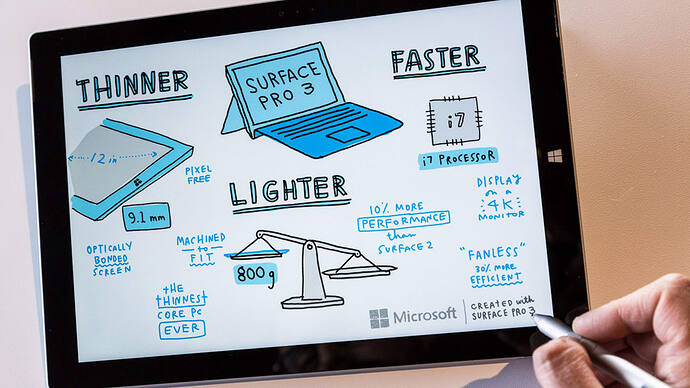 Microsoft’s Surface Pro 3: The Tablet That Could Finally Get You To Ditch Paper

We were once promised that we could abandon our sketchbooks and notepads for tablets, but it never happened. Enter the Surface Pro 3.

After waiting for the last 2 years for a decent footprint-sized PC slate w/ Wacom & GPU power, I grabbed a Samsung NotePro 12.2 in January. I come from the school of PC sketching as it was defined by Toshiba - we had two 2007 Tecra M7’s still up and running until earlier this year (14.4", Wacom enabled, NVIDIA GPU, etc) so I’d hoped the NotePro 12.2 would be the all in one we’ve been looking for IF I could get KitKat to do what Windows has always done - that experiment is ongoing with lots of pros and just a few cons but the Surface Pro 3 appears to finally have what we need (aside from a cheap price and a silo for the stylus). Loaded with the best processor, most RAM and largest HD it’s gonna be $2K - but everyone I know who already has a Surface Pro (1 or 2) has been very happy with it.

All the designers in my office saw it and went “finally”. Until they saw it wasn’t Wacom. It sounds like the other pressure sensitive tech this is using will be good though.

I like where the SP3 is heading. I think SP4 needs a hinge in the keyboard, like a traditional laptop. The kickstand although cool, takes up a lot of space, maybe have a friction hinge in both the kickstand and type cover… then offer a 15in version.

This shows how crazy thin the surface pro 3 is:

All the designers in my office saw it and went “finally”. Until they saw it wasn’t Wacom. It sounds like the other pressure sensitive tech this is using will be good though.

" It seems like a lot of good work has been done to reduce the parallax (distance between the stylus and the screen), the latency (which many people find to be an issue when writing or drawing), and with palm blocking — but it should be pointed out that most of those advances are thanks to N-trig’s DuoSense Active Pen technology, rather than amazing engineering on Microsoft’s part."

I just want everyone to pause for moment and think about this: we have an active thread discussing an MS product (mostly positive too) and nothing about the upcoming Apple announcement in 2 weeks. Just sayin’.

I think it’s an odd mass consumer product, but could potentially make a lot of sense for professions like ours. The size of this device I think is it’s most appealing feature for me. I didn’t like the Wacom Companion devices because of their heft (and price). I don’t ever anticipate buying a Surface as my workhorse computer, but I could see it as a more appealing purchase than a Cintiq. For the same price as the 13" Cinitq, you could have a much better product in the Surface 3 if the pen input is decent enough.

I don’t know why I’d ever buy one as a main computer though. My tablet is a toy and I need more power per dollar for a main computer. This is basically trying to be both unsuccessfully for me. It’s not powerful enough as a main computer, nor does it excel at being a tablet like an iPad (battery life, cost, apps, etc.). I also don’t think the covers are a good keyboard replacement for those spend all their computer time typing.

Thanks for the link sketchroll. I wonder how much of his feedback will be taken on board by MS considering he would have big input into the drawing community. It’s good to hear it doesn’t seem to lag when drawing but I still can’t figure out why an i5 processor would lack the grunt needed to switch applications like he said.

I’m quite keen on getting an entry-level i5 model mostly just for Sketchbook Designer and PS work. A lot of people are unhappy that Microsoft is not bundling the heavily-advertised Type Cover for free, but personally for the sort of work I plan on doing it might not be such a big deal not having it and saving some cash.

I doubt anyone in our profession would be replacing their laptop with this like how MS is marketing it since most of us need discrete graphics for CAD, but I’d take this over a Cintiq Companion any day.

Well, at least Gabe (Penny Arcade) says that NTrig isn’t an issue from a sketching standpoint - so that leaves general, non-sketching lag as the only issue he noticed and makes me think the 8gb RAM, i7 with the 512SSD is the one to get.

Here’s another artist forum I watch - the Surface 3 has prompted them to do a full Wacom vs. NTrig comparison, soon to be published on that site; http://surfaceproartist.com/

I doubt anyone in our profession would be replacing their laptop with this like how MS is marketing it since most of us need discrete graphics for CAD, but I’d take this over a Cintiq Companion any day.

I’ve got a first-gen Surface Pro, and its actually not bad for working in Rhino. I like that I can pinch zoom and rotate with the touchscreen. I haven’t tried SW on this guy, but I’m guessing it can’t be that bad. I doubt this would replace a full size desktop CAD machine.

Mainly I got this for sketching, and the 3rd gen seems like it’ll be even better for that purpose with the extra screen real-estate and the new kickstand.