Micro/Smart apartments - What do we think?

Just a general post following on from today’s interesting article on another micro apartment.

What do we think of these？ Would you rent one if you had recently moved to a new city and starting a new job? Does the lack of space (theoretically) concern you?

I personally think they are fantastic and sitting in my university room now I can’t think why I would want something like this up until I had a family, especially if I was pushing a new career move or whatever…

Anyone care to discuss?

Totally do able, especially if you are living in a place like SF or NY where the majority of your time is going to be spent not at home. Over the years we have lived in a variety of sizes of places, both long and short term. They all have their inherent pros and cons. One of my favorites that we stayed in was this 500 sq ft glass house that we rented for a week a couple of years ago. I could have lived there, though it was a bit remote: https://www.airbnb.com/rooms/25230 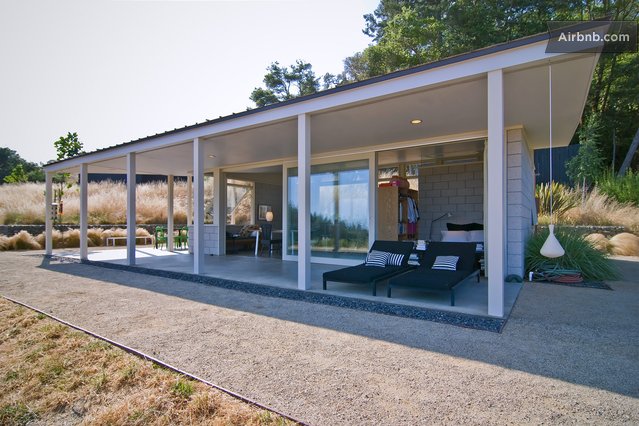 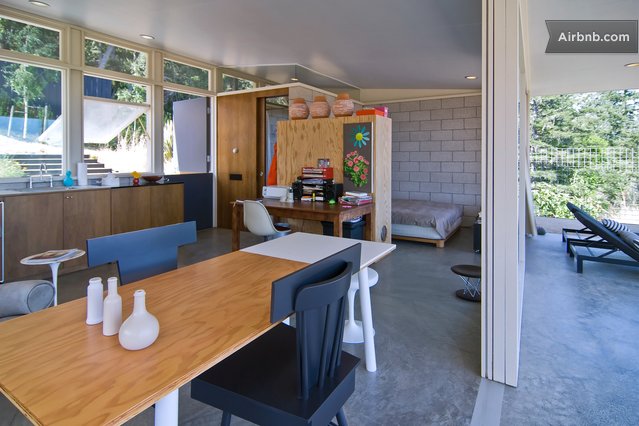 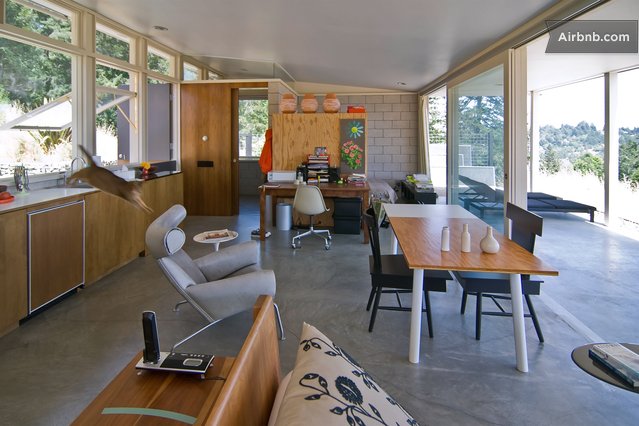 Love it. Would probably prefer it to a bigger place, I barely spend any time at home when working (not in school), and there’s less to clean. It would also be fun to switch it around every once and a while, sleep in a different room, etc. I always love a good furniture shake-up.

The first thing I noticed was that the dishwasher is way to small for my purposes, I have trouble unloading the dishwasher as is, and prefer to do housework in large chunks. You would also need a grocery store nearby with that fridge.

Michael, where’s that glass house? Looks like it would require some SoCal weather.

At 61/57 years of age, my wife and I have accumulated so much inherited family furniture and extraneous stuff that I would welcome a move to something like this.

SWMBO, however, would probably balk at the idea…

Michael, where’s that glass house? Looks like it would require some SoCal weather.

I have been thinking a lot about the concept of super smart apartments and how I wouldn’t need anything more than one up until I had a family (I put would* in the original post, my mistake)…

Here at my school we have a single final year project that we do and I have been trying to think about how I could use this concept.

Could I standardise a design that could be optimised for 250 sq/ft, 350 sq/ft and 450 sq/ft? I would want to start a company with it if so and I know it would still be boutique kind of design, perhaps in batches of 20 apartments at most but I just can’t stop thinking about it… Yes, it would be hard work but how great would it be if a company could completely refit a dilapidated apartment for say $50,000 that increased the monthly rent by 30/40 %…

Thoughts on such a daring project? I just can’t seem to fault the idea if it was done with a lot of thought so that I could justify why a customer wants it and they will say ‘oh yer, ok that’s a great idea!’…

Pull out beds, sofas, tables etc. BUT done in a very elegant way, as part of an entire, well thought out design - no ‘oh we’ll just stick that pull out bed here’ mentality. I know the American company that produces fantastic pull out designs but I think it needs to be a whole, integrated apartment design with everything considered - kind of like the ‘Machines for Living’ but much more modern.

If you decide to look further into it, then I think it might be worth starting with a bit of economics. Do a competitor audit - find what’s out there and at what price, maybe get some quotes. There are definitely companies outside the US as well, I know I’ve seen some italian and some swedish space saving furniture. See if it’s a viable business idea.

That said, I think you might find that standardising a set of furniture that specialised for a set size might be quite tricky, considering all the weird apartments with doors and power outlets in bizarre places… Or maybe that’s just student living in the UK? 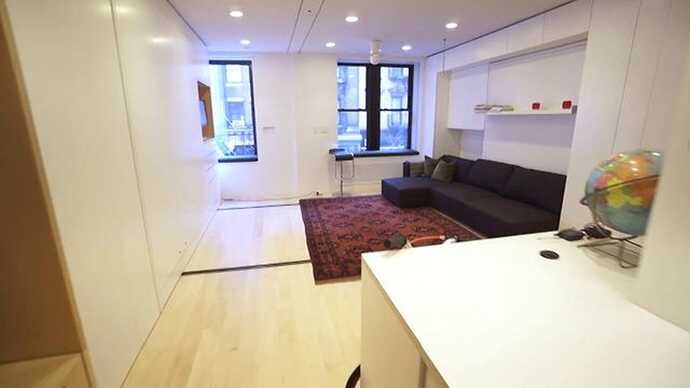 Living in New York City isn't all adventure and dynamism. Unless you are wealthy the way no real person is, you probably have to settle for a living space that is cramped and cluttered. It is the project of Graham Hill, entrepreneur and...

Is this the sort of thing you were thinking of? It doesn’t look to have been produced by a company specialising in this area, more of a conceptual “Look what could be done” kind of thing. Although i think they have pulled it off, I could see myself living there 100%, if only for the experience of it alone.

For what its worth i think its a great idea. Although this is from a potential tenant of a tiny flat perspective, if i owned a tiny flat and was renting it out for a already substantial amount (If it was inner city), then would I want to shell out to renovate it to maybe increase the rent? I’m not sure.


Is this the sort of thing you were thinking of?

Precisely Oli! That is actually the video that got me seriously thinking. Yes it is possible to do on a much bigger scale as he said but I think it’s something that someone/a company would have to live and breath for years and nothing else. I think ergonomics are one of the biggest factors involved as well as very intuitive, but SIMPLE, mechanics - there would be so much to consider, but who WOULDN’T want to live somewhere like this, having more space for less rent?!

Yo - Good find! I’ll have to bare that in mind!

I think standardizing it would be very difficult indeed but I was thinking what if a system could be developed along side all the design so that if there were odd plugs, awkward doors or difficult spaces, a team could just work around it. It would have to be very well thought out indeed so as you suggest Hiower, serious thought and research into economics would be in order.

I think it would only really work as a business if it was done with, say, a block of 6-10 apartments in central San Fran, Manhattan, London etc…

Just a general post following on from today’s interesting article on another micro apartment.

What do we think of these？ Would you rent one if you had recently moved to a new city and starting a new job? Does the lack of space (theoretically) concern you?

I personally think they are fantastic and sitting in my university room now I can’t think why I would want something like this up until I had a family, especially if I was pushing a new career move or whatever…

Anyone care to discuss?

I personally agree with you that it is a wastage of money to buy a big apartment or a house unless you have a family. There are affordable apartments available which might be small but otherwise perfect for single persons who are relocating for study or job and are going to spend only a few years there.

It is a movement I have been following for a few years and am thoroughly on board with. In fact, I did live in a micro-apartment when in NY for a year and it was fantastic to have that amount of privacy for my $1000 a month, given I could have rented a room in a four bedroom apartment for that.

I won’t post pictures of the place because it wasn’t as nicely designed as the ones you see popping up on blogs/Pinterest but as mentioned it was fantastic to have my own space after a hard days graft at the office.

As I am now in my mid-20s the idea of buying a small place to renovate or even one of those tiny home trailors is really appealing to me. It’s something I could afford rather than throwing rent in to an apartment. It really isn’t hard to live small and many seem to thing you need to get rid of a lot, especially your wardobe but I really didn’t have a problem.

Heres a Pinterest board of mine with different images of tiny houses I’ve seen pop up over the last few years: https://www.pinterest.com/davidbulldesign/micro-apartment/

like everything, there are 2 sides to the story.
Millennials and those living in NYC or SF love them for the winning combo of affordability plus privacy. Developers love them because they collect more rent per square foot (versus 2 or 3 bedroom apt’s).
Cities on the other hand have witnessed generation after generation move to the suburbs when it’s time to raise children, leaving behind a vacuum of un-needed urban housing…which drops in value…turns into slums…is a lasting headache.
Boston has approved development for micro-apartment units in the hundreds. Considering there’s 42 million Millenials still living at home nationally, I think Boston’s city planners are thinking of something different.

I think of them as cars. As your life changes you go from 2 doors, 4 doors, sliding doors (yes minivans) and then back to 2-doors or no car when you are older. Micro-apartments or tiny homes are great if you are young and single. Once you get married or start a family it would get pretty crowded and hard to keep neat and organized. My 2 year old can tear up 3 rooms in 5 minutes flat. It’s also nice retreating to your bedroom to call it a day away from all the other stuff.
It’s a lifestyle decision where you have to weigh in traffic, cost, family size, etc. Great for single people, challenging if you plan on having a family. The transforming apartment seems a bit gimmicky targeting a very specific demographic but I guess it serves a very specific purpose.