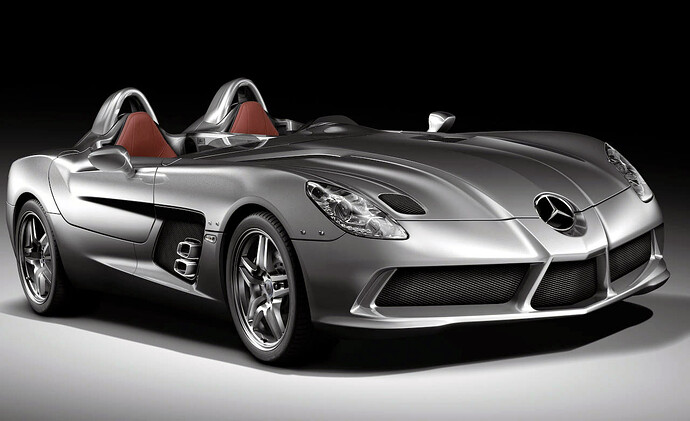 It stands out for sure, but way too much going on for my taste. Sketches look better. Front - could be the angle, but the headlamps seem too far out, like a disproportioned face.

I have to say, I prefer this to the normal SLR. That thing is hideous. This is over the top, but somehow better. Perhaps I just prefer the detailing.

Thats a lot of vents.

First they oversexed the new Aston concept, then the Citroen GT, now this.

So, I’m going to try to name this trend.

I think it’s breathtaking at first glance: it hits you at a very visceral level. But then when you look at it a little longer and a closer, it’s in fact busy and cluttered and has some odd details, like the too oversized side air vent + exhaust, and those tiny bumps between the head light and wheel. The front 3/4 does say Merc to me though, in some far off, distant galaxy kind of way. The rear just looks like a grumpy ogre. I think it;s the regular spacing of those white things that look too much like teeth. I think the paint is also adding to the visual complexity too. It uses a spherical metal particle, instead of flake, which makes it it really liquidy looking.

I’d like it considerably more with a standard windscreen. I understand the Sterling Moss concept and everything but…

you get a better sense of the car here…

I think you guys are off here. This car is pretty nice and relates to their land speed record car from the 1930’s, as well as some of their other racing milestones. I think it is a lot nicer than the SLR.

Careful not to turn into blanket haters on here, there is some nice forms on there. I like that how asymmetrical front inlet relates to this car:

does make a lot more sense after seeing those pics. thanks Yo.

I’m not necessarily hating.
I mean, my inner 7 year old is loving this, but my adult sensibilities are a bit embarrassed by the excess.
Damn, but that land speed car is gorgeous.
Makes the Moss concept a bit more understandable, but also weak by comparison.

I hear you. For me, it is a step in the right direction though. The SLR is very busy and over the top. I think this car makes sense of some of what was going on in the SLR brings into under the Mercedes umbrella a little more for me, and I hope is a nice sneak peak at the upcoming gullwing. 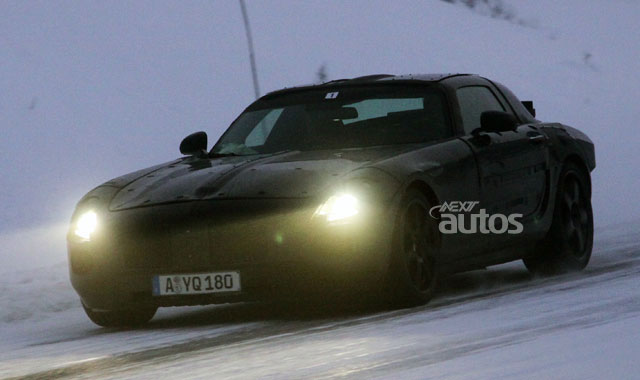 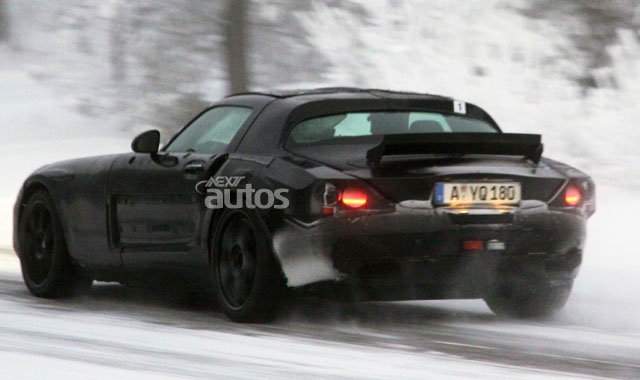 I like it, I just think I’d like it better with a standard (or slightly higher) windscreen. Look at the relationship between the windscreen and rear deck scoop (?) on the original model vs. this new concept. I think proportionally something is off. Because the driver won’t be wearing a helmet, it needs some kind of roll cage behind the driver. Therefore the windscreen should be higher to match that height. 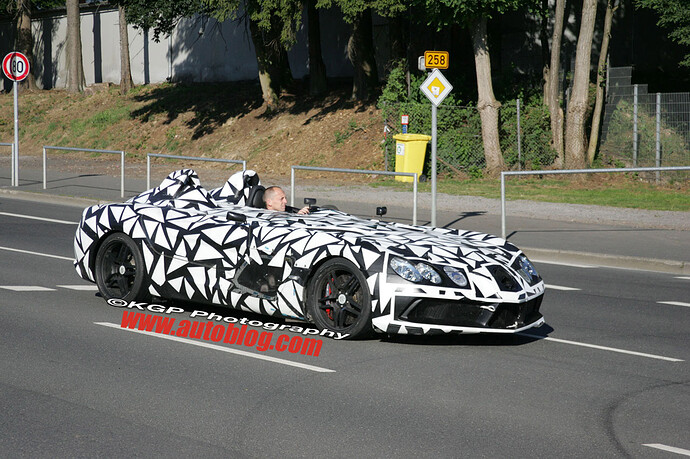 Oh yeah, the details are much easier to see… . …

I like the side view: I think it really captures the essence of a sketch. The way the surfaces play with light is really nice.

I just can’t wait to see that gull wing. It looks like it has a flatter front end and a bit of a sleek tail, though hard to tell from the spy shots, there is a lot of add on camo. 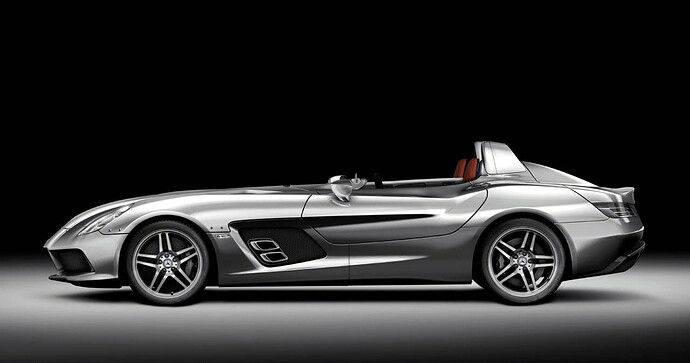 I haven’t been happy with the SLK since the front end change in 2004(?). Generally too busy overall in front, and detracts from the traditional MB flavor. The grill split gives it a subtle Firebird-esque flavor that I am uncomfortable with. The aft end is still identifiable as Benz.

The bow shot you get on the road when approaching a car is like, “Boom! You know what I am.” But I have always found the stern view of a marque, when overtaking, to be more exciting; it is telegraphing you of what is to come, and suggests that maybe you should slow down and enjoy it. Or, if you are so equipped, drop the pedal and blow it off in contempt.

Yo, do you know what year the “top view” machine is? Can you find us a 3/4 view of this? I like the asymmetry too, and the leading/trailing edge intake/outlets are completely business-like, but beautiful at the same time. The plaid seat upholstery. . .m mm mm, I dunno… … .

I had to throw this image in…

I believe it is called the Stromlinie

Here is anther shot of it.

Also, check out this side to side 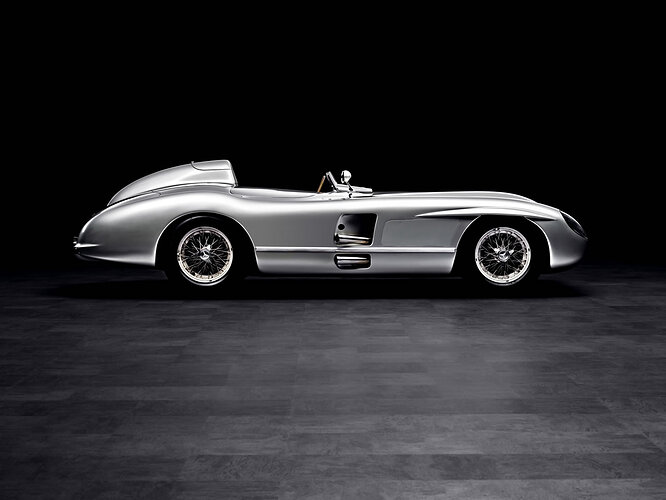 Alright, now I’m really enjoying this. The next thing I’d like to see them try is a modern take on their wire rims. That would make this car, rather than their 5 split-spoke design.

One of my only issues is the part line through the rocker panel under the door. I wonder why they didn’t continue the front line of the door down? Most of the other part lines are done very artfully. The way the deck breaks around the vent, how the rear quarter break meets the tail lamp. This one stands out. 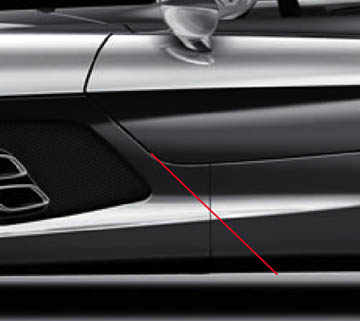 Turtledeck yes! Forward raked rollover structure no. The original exhibits a timeless design if you ask me. Interesting metamorphosis of the radiator opening up until the split grill of the 2004 SLK

Which all those lines flying around I was thinking that solid disc wheels would be a whole lot less annoying. The whole thing looks like it is chasing BMW. 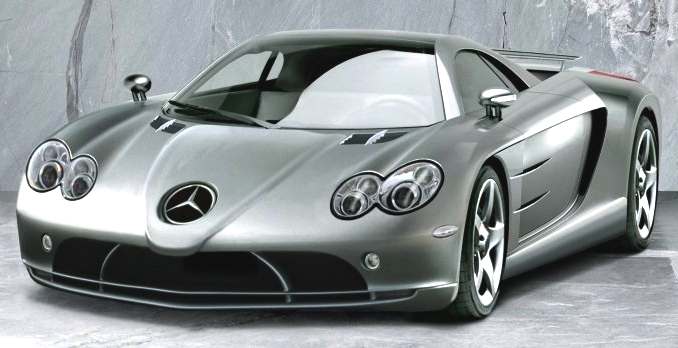