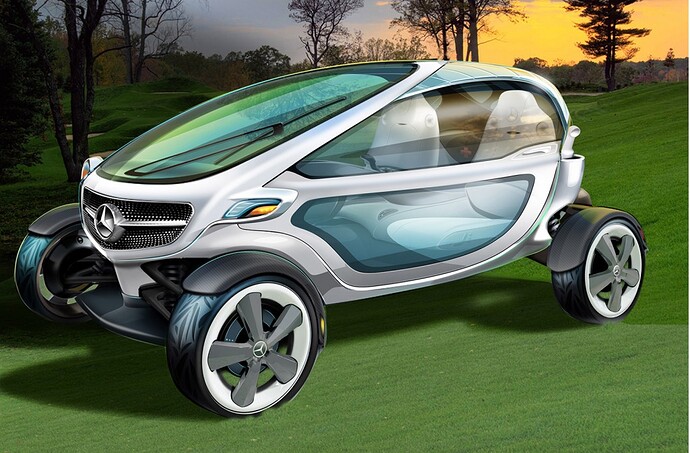 No point in being that big. Also having doors will be a pain to get in and out at every hole (saw the link, doors are optional)

Fun sketch. Makes more sense for a Smart Car replacement. Windshield wiper? So many extra parts, so much added cost, giant wheels ripping up the turf, has this designer ever played golf? Where do the clubs go? Where do I put my beer? Golf carts don’t need that much suspension kids. We should do a design challenge to design a golf cart!

Michael you failed to see the target market for this vehicle. Retirees. I can easily see this bombing around the villas and condos in Del Boca Vista. My parents use their cart almost exclusively to get around their community, and there are certainly those who spend considerably more money on their cart (headlights, signals, wipers, etc. )

That’s the people who will use it.

That is not how the designer portayed it.

As a neighborhood vehicle it makes sense. It is portrayed on the fareway.

I realize that. I’m just saying its likely the intended market. It’s a “golf” cart.

Also didn’t intend to come off like a smug a-hole in those two posts. My apologies.

No worries, I’m being a stickler for the visual intentionally.

Get a room you two!

No worries, I’m being a stickler for the visual intentionally.

I took a look at that included picture and thought, “they are not selling a golf cart”, it is a misdirect.

The retiree observation then found the hammer and hit the nail on the head. The vehicle is being sold as a car substitute with none of the car restrictions like crash testing. The golf course imagery is a ruse for its actual purpose, a cool (expensive/status) commuter vehicle in closed communities, with golf course functionality as its sheep’s clothing.

I look for the hidden messages and intentions, and the full on oddity of a windowed up, streamlined car on grass was begging for a real explanation.

I think the retiree thought is spot on. Do you see the odd red cross in the back corner behind the passenger seat. I am assuming a first aid kit. Maybe this will include a defibrillator.

Oddly enough, My Dad (68 semi-retired lives in Florida 6 months a year) just bought the big daddy to this the GL 550. Funny, now I can totally picture him driving this little concept around the retirement village.

Sorry for the tangent, but has integrating headlights into side view mirrors been done before? It’s a neat touch that seems like it would work on this body shape.

I’m thinking that it would be illegal for roadgoing vehicles, but some fake fogs (a la Juke) could make the look work…

…has this designer ever played golf?

This was my thought looking at this. Definitely agree it would be more of a replacement for one of these guys. Though the retirees would be rollin’ in style in the Merc. 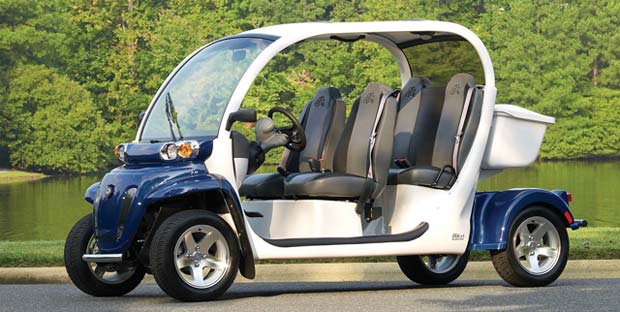