Media of the day

Wow, I designed a pair of skates…we never talked about that use in any meetings.

“The phone lines are open…” - http://www.planetvids.com/html/Guns-On-The-Shopping-Network.html

“It’s all fun until someone is traumatized for life” - Link

(btw, these are Safe for Work. Just might want to keep the volume down on this one.)

I guess that you aren’t one of those designers who want to “make technology friendly” csven.

On the contrary. There’s a valuable interface lesson to be learned in that last video.

Video of a climbing robot. 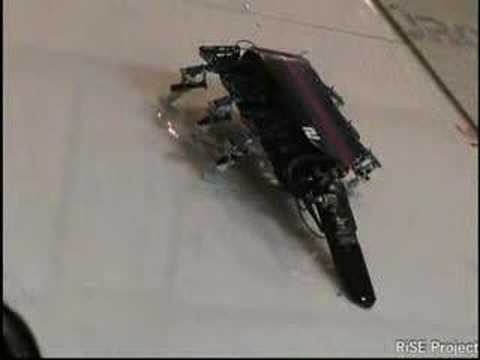 Great engineering. Why don’t they send things like this to Mars? If wheels were the best mode of transport on rough terrain, we would all be born in wheel chairs.

Caught this a couple days ago. Pretty cool.

That’s an evolution of existing tank technology. I think all M1s have a system of plates that shoot off into anti-tank missiles as they approach, thereby exploding the missiles a few feet away from the tank.

The system you post seems too smart to not be defeated easily though. I will certainly be watching to see how long it takes someone in Iraq to come up with a home-brewed response to this.

I believe you’re referring to reactive armor. If not, can you provide a link?

I was refering to the reactive armor.

That animation makes me feel like I know absolutely nothing about computer modeling!

Reactive armor is just that: reactive. It doesn’t intercept an incoming missile. It explodes on first contact knocking it back. Good against armor-piercing rounds that shoot molten metal out.

I recall the old Soviet T-72’s being covered in that stuff. Looks kinda cool.

wrt the video, I’ve not researched, but suspect it’s a combination of some “Explosion” code and particles. I’ve read some tuts on particles for this sort of thing. Cool stuff. Wish I had time to play with it.

Anyone stung by a jellyfish will appreciate this microscopic view of how the barb (travelling at the speed of a bullet) and the poison (pumped through the attached tube) work.

The Philips Bodygroom - for that “optical inch”.

The Philips Bodygroom - for that “optical inch”.