Hi I’m 19 and here are my MAzda 3 concept sketches, I’m not satisfied with these tho: 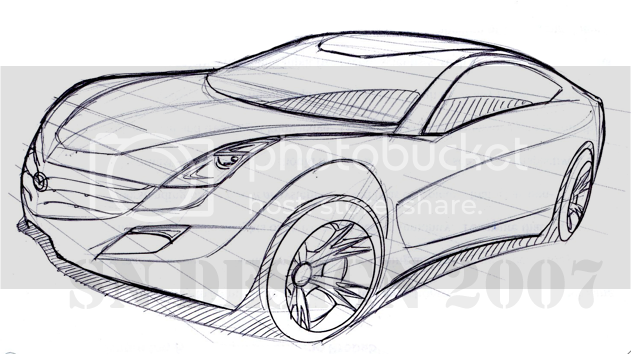 You have to be confident in you work. I think the sketches look nice but the rendering needs work.

For 19 y.o. you’re definately doing good. and get used to not being satisfied but don’t loose the drive to want to be satisfied. infact NEVER be satisfied! if you ever start feeling satisfaction in a drawing be suspicious! work more!

your perspective needs a little work, some of the far edges of the car look a bit awkward… little explanitory sketches are sweet, you could punch those up a bit and make them more dominant, or even make another page layout specifically for the explanitory stuff. Use guides on the side view wheels so they look clean like the perspective ones. and honestly the rendering doesnt comunicate much more than the headlight shape. Use it to show the surface of the hood, show light and darkvalues in the grill to describe the form more…

thats what i’ve got for you.
good work though keep it going for sure!

I’m also really never satisfied with my work so I understand what you mean! Keep it up!!

Like top left, front in color, 3/4 rear view(with exhaust tips, good detail) and bleu under the leaf deatail of…? Think its the roof.

Ter are some parts strange, front fenders. It looks like you want a bulge on the fender but some times its not clear on the other fender making it stick up.

Looks like you have pasion for it. I would say keep on going and look for a design study to go to.

would be great to hear more of your thinking about the design direction and where you would like to take it. also would be nice to see some stuff a little more out there than something that is very “now” inline with current models.

keep it up and post again some more stuff. its the best way to grow!