I am currently working on my graduation project at the University of Technology, Eindhoven, The Netherlands. My project is about gestural interaction with a kitchen faucet. I have a question for you guys:

We all know how material properties are used to indicate a point of touch (think of a zoom-ring on a camera lens which is made of a soft silicone/rubber-like material and has ridges for grip). But what material properties do you think express “don’t touch”?
Think of, for instance, glossy vs. matte where glossy could express fragility and a matte finish solidity. Any tips on some literature or other resources are welcome as well!

maybe something with the color red? Or with a surface treatment or deep engraving that look less touchable?

Lots of faucets are glossy chrome, so it’s common to touch a glossy material by itself - unless maybe there is something even more touchable next to it

an oversized knurled texture says don’t touch to me. it has to look sharp. 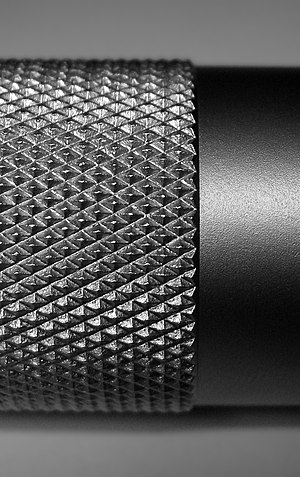 knurled always says “handle” to me though. look at workout equipment: wrecks your hands but youre suppossed to grab it at the knurled surface for “grip”.

I was thinking, maybe make it emulate visual queues that are related to pain: a glowing red handle may look like its super hot.

if they are not meant to ouch this component, why expose it at all?

Thank you all for the quick replies. Let me give you some more information about my intentions. I am still exploring, so everything is good at this time though.

The faucet will have a physical presence and gestures will take place close to the faucet at certain points/areas. These ‘interaction zones’ need to be communicated by means of, for example, 2 different materials/textures. So what I was thinking about was 2 materials where one indicates the interaction zone. So in this sense, this material should express ‘don’t touch me’.

I’m gonna be intentionally vague here: possibly better than color/texture is to make a non-touch area concave because psychologically, humans are hesitant about sticking their fingers in a hole, especially if it looks like it’s dark/too small. The opposite of a big soft button. Food for thought…

if it was like a touch/trackpad, I think the shape of it might help make you want to touch it. Maybe subtle graphics? The matte surface of the touchpads would read as touchable if the user knew that it had a touchpad control and in the shape of one

I was thinking knurled at first too, but for a sink faucet it’s a little rugged

knurled always says “handle” to me though. look at workout equipment: wrecks your hands but youre suppossed to grab it at the knurled surface for “grip”.

I agree knurling makes me think of grip, but to me diamond knurl says industrial. I don’t think that you need grip on a faucet, most handles you encounter are smooth. I’m confused why you would want to indicate a don’t touch area on a facet? I would want to know I can touch the entire fixture.

Jasper-
I may be looking at this from the wrong angle but, CFM is based on contrast and how that contrast is controlled to solicit a reaction. That being said I would over emphasize the touch points. What you are looking to do is interesting but my thought is the moment you call attention to something with a CFM treatment you are inviting curiosity which is normally followed by people wanting to explore their curiosity and physically explore the object. Just my to cents.
c2c

Things that are overly shiny, say, like the back of an iPod (forgive me for the reference) or the lens of a camera scream don’t touch to me.

I think in the faucet world, as mentioned above, there shouldn’t be areas that a person feels they shouldn’t touch…you should be able to touch everything!

Maybe a way to look at this is to focus on materials that say “touch me” and focusing on that can then take the users focus away from areas that you are wanting them to stay away from? So in the end you are still getting your own point across without limiting the function of your product. This to me seems much more realistic rather than making an actual part that you say someone cant or shouldnt touch.

You bring up an interesting design problem. A few years ago there was a competition to design a sign system for a geographic area that stored nuclear waste. The design challenge was to make a sign system that would endure a thousand years and have design semantics that would have a universal warning that anticipated future inhabitant’s language. Some of the competition entries, in an attempt to be forboding, actually were so monumental that the design semantics would attract rather than discourage investigation of the nuclear waste site.

You might find this book informative: Turn Signals are the Facial Expression of Automobiles, Donald Norman

Take a look at nature. There are plenty of species which have evolved a “don’t touch me” aesthetic. Spiny fish, poisonous frogs, cactus etc. Obviously many have taken a camoflague approach too, so rather than saying “don’t touch me” they just avoid the issue all together!

Also look around your environment and catalog things you wouldn’t touch, then map their attributes.

i’d say a rusty surface says don’t touch… weathering steel or something like that, an unfinished surface that you get rust smudges on your fingers from touching… also interesting for a faucet since water enhances the oxidation process…

I agree with Bbarn and mister that, indeed, I shouldn’t emphasize it too much as it will probably attract explorative behaviour. I think some sort of contrast (whether in material, finish, texture or form) is interesting to provide subtle hints.

I discussed this question with some fellow students today and we agreed that an answer shouldn’t be searched for in the negative domain such as the expression of hurting/burning the user.

I also agree with acidmonkey. The idea of smudging or breaking the areas of the faucet where I want people to perform their gestures is very interesting. Very shiny and/or thin surfaces or maybe unfinished wood could express a no-go area for touching with wet/dirty hands. The latter by the way, is the reason I want to design a faucet that is controlled with hand-gestures only.

Looking forward to read your opinions on this!

The design challenge was to make a sign system that would endure a thousand years and have design semantics that would have a universal warning that anticipated future inhabitant’s language.

That was a super interesting problem, although I think the timescale was much longer than 1000 years (10,000 maybe?). Even if there was a huge catastrophic event that wiped out civilization, someone living within the former United States would still be able to understand (and probably read) present day English 1000 years from now. We can read stuff from 1000AD without great difficulty. Go back 10,000 years though, and we don’t really know much. Go out 1 million years in the future and it might be rats or dogs trying to read the thing.

The problem, as you point out, is that people (and probably rats and dogs) are curious. No matter what you put on the sign, someone’s going to want to look inside.

you could always use pavlovian conditioning… have a sign/faucet with a “touch this” label, which delivers a small shock…chances are you won’t touch that or go near it again… works for both rats and people!

mister: do you have any reference for that nuclear signage problem? I’d love to read more.

For the faucet, I’m imagining a pulsating glowing red area. Actually, I can’t think of anything illuminated that we are supposed to touch. A light bulb, fire, glowing red steel, it’s all stuff we don’t touch.