Hi everyone, I recently finished documenting one of my projects from my first semester of the Industrial Design Masters program at UIC and wanted to share it for any feedback you might have. Thanks in advance!

I designed a desk lamp that uses a ring form as a more aesthetic and simplified re-imaging of the classic Angelpoise desk lamp joints.
(Behance link for bigger images) Behance 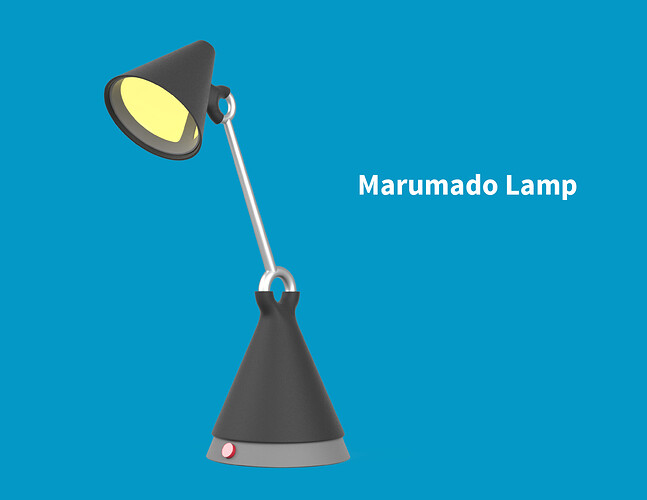 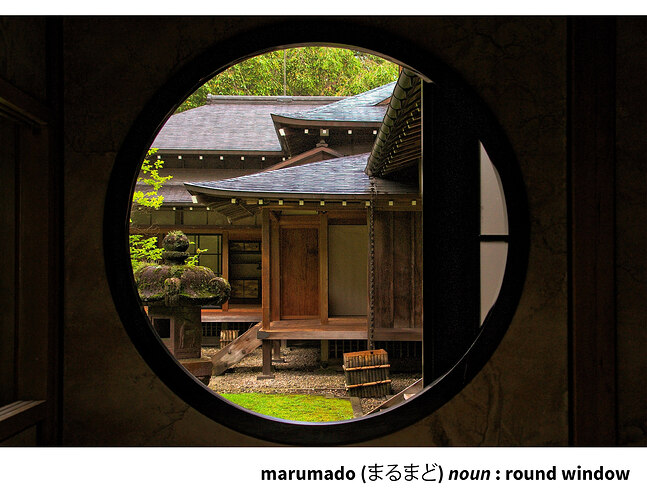 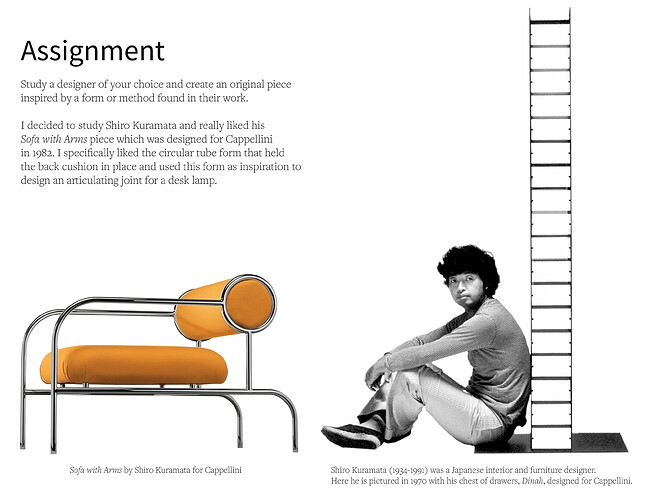 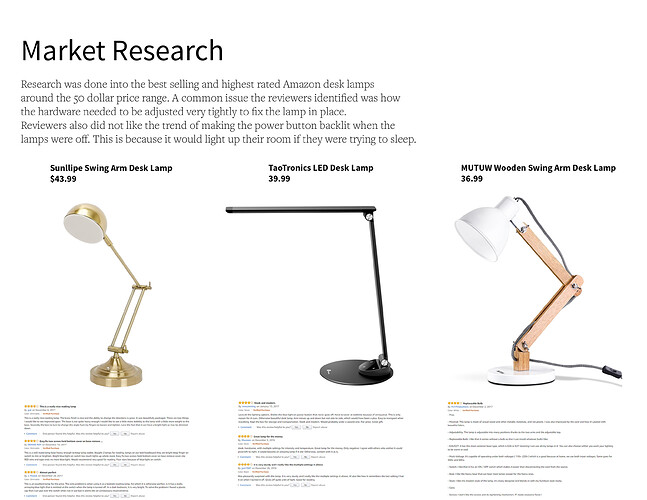 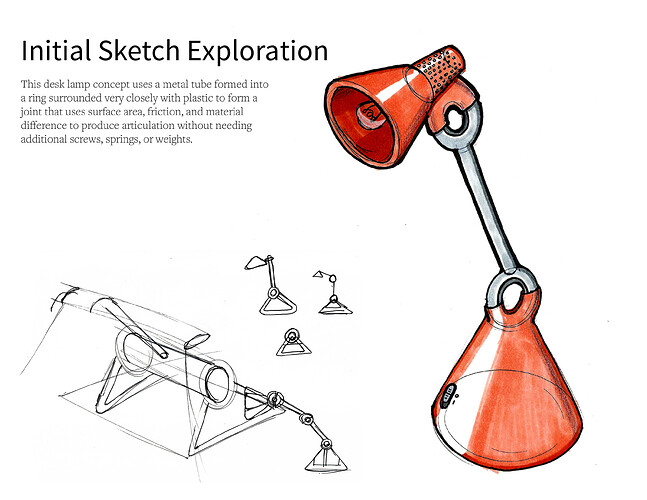 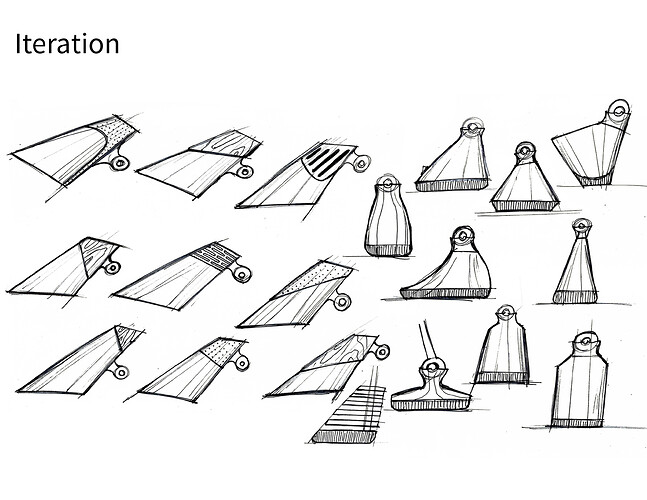 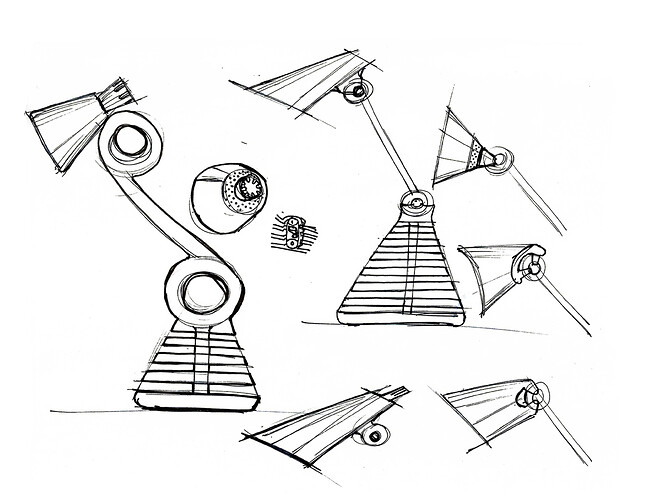 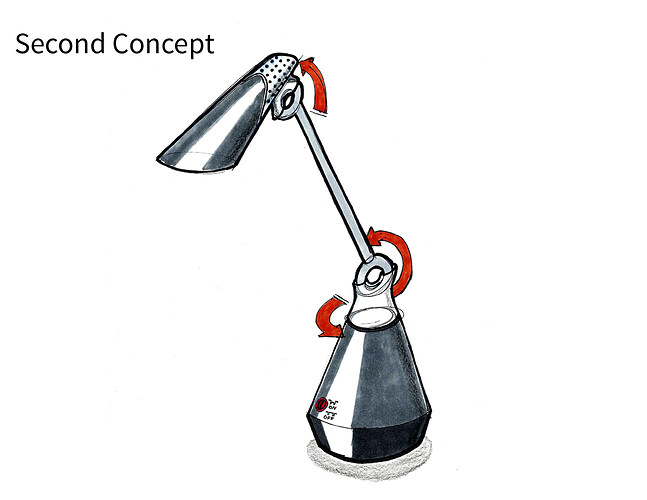 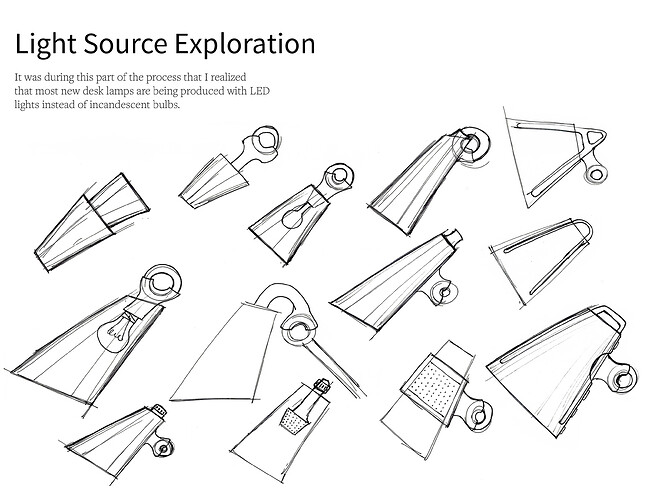 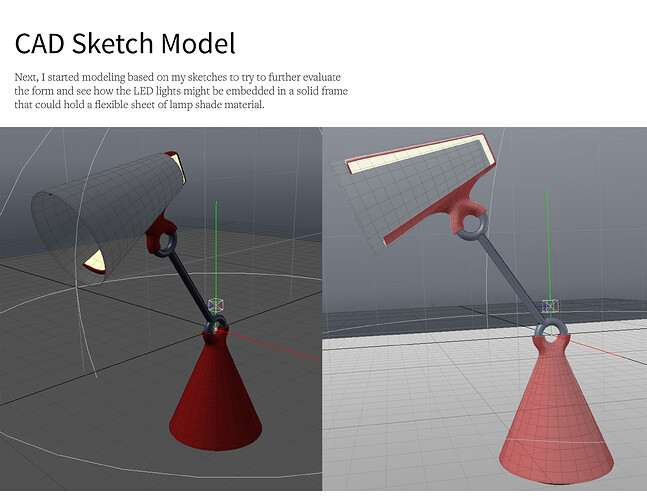 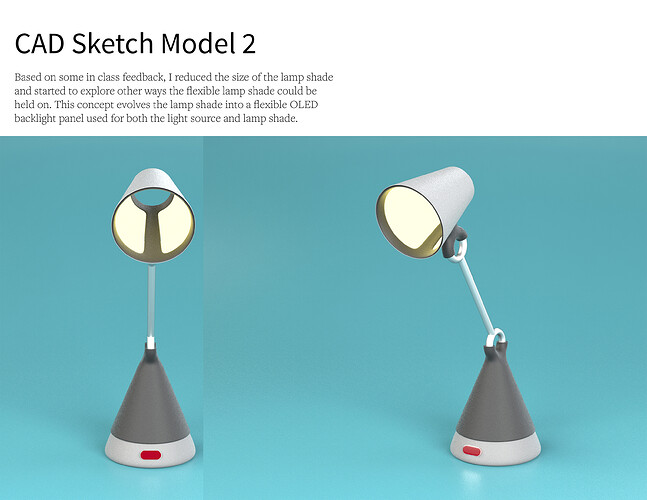 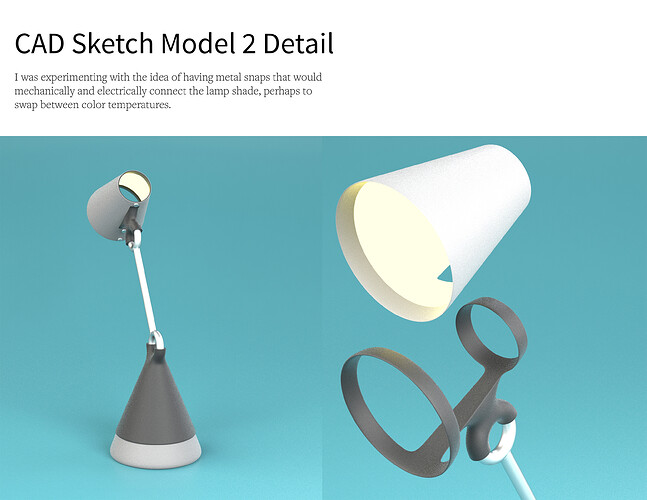 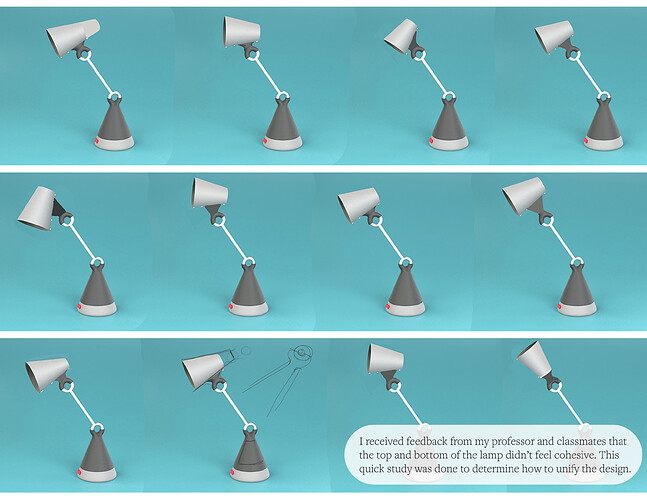 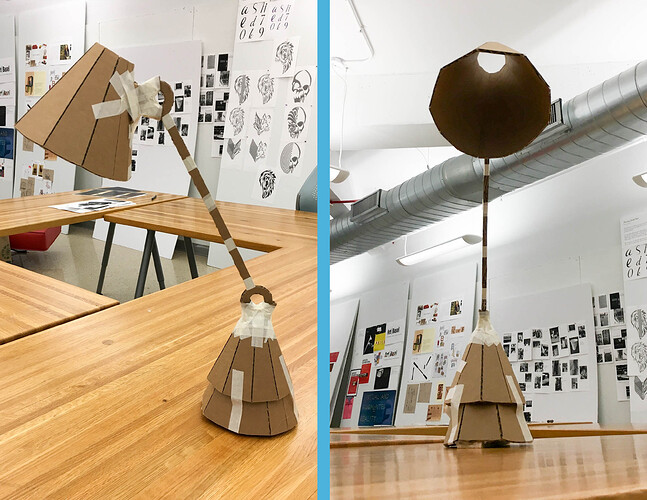 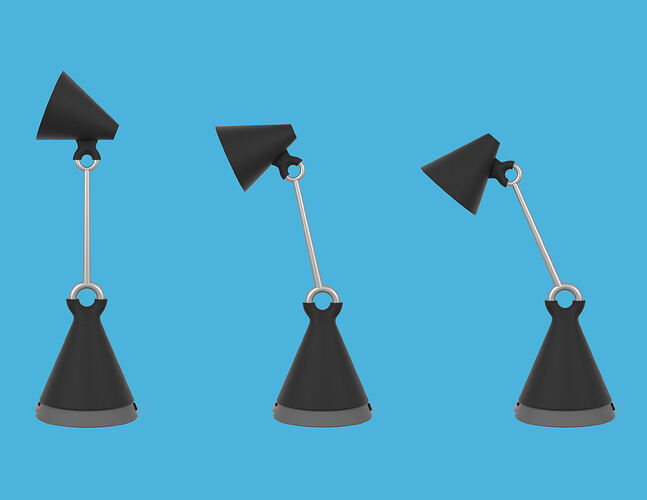 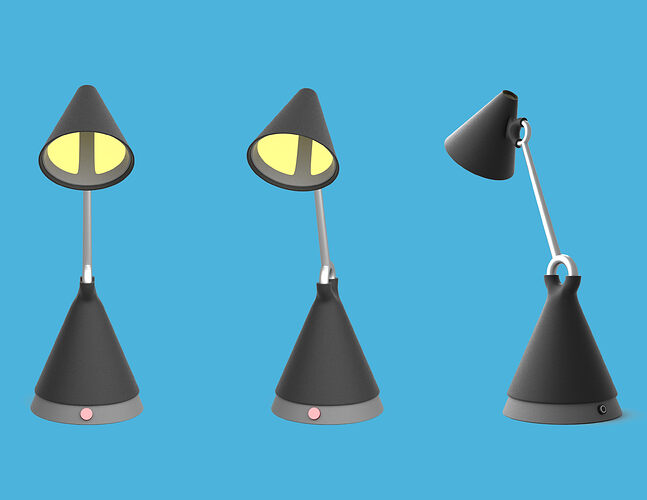 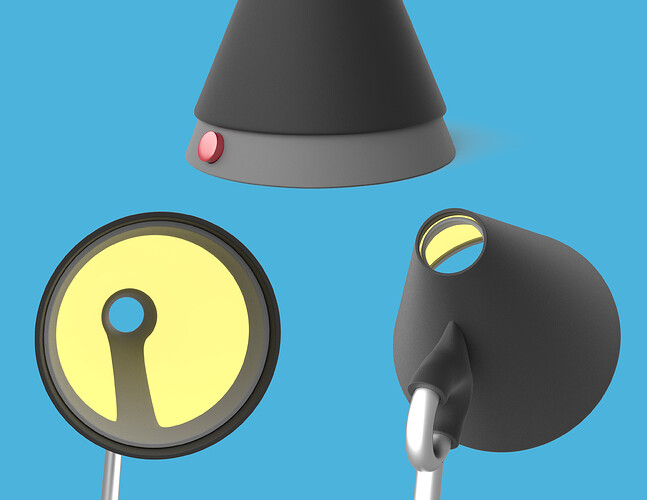 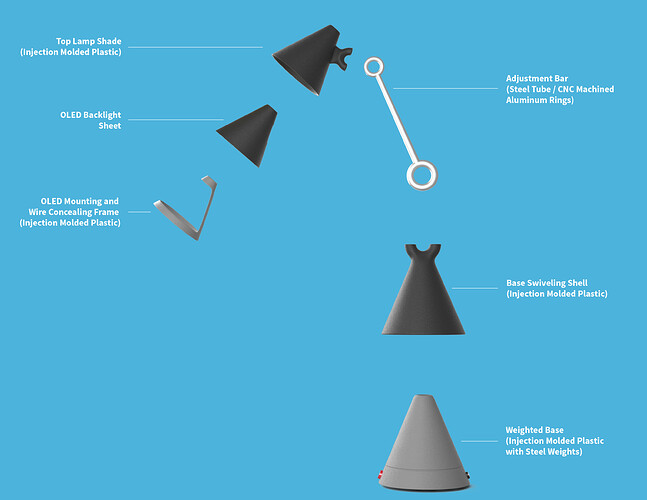 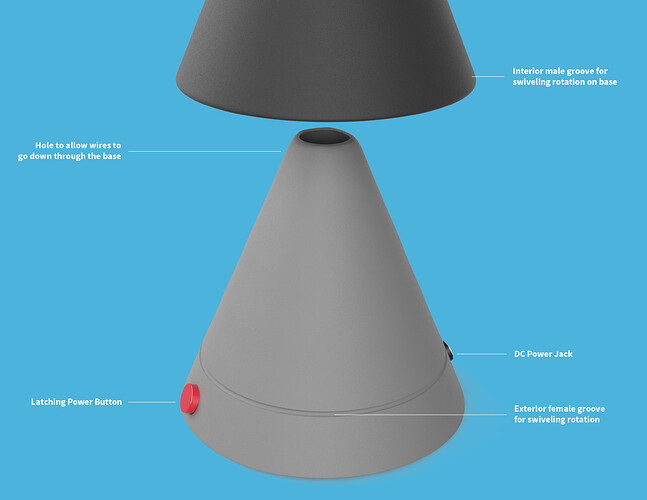 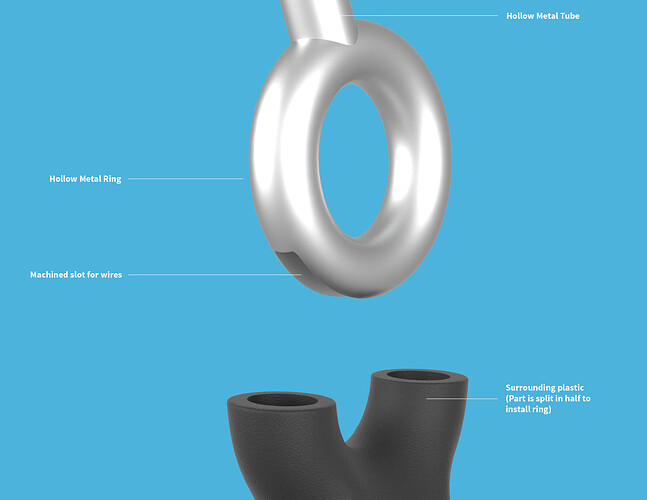 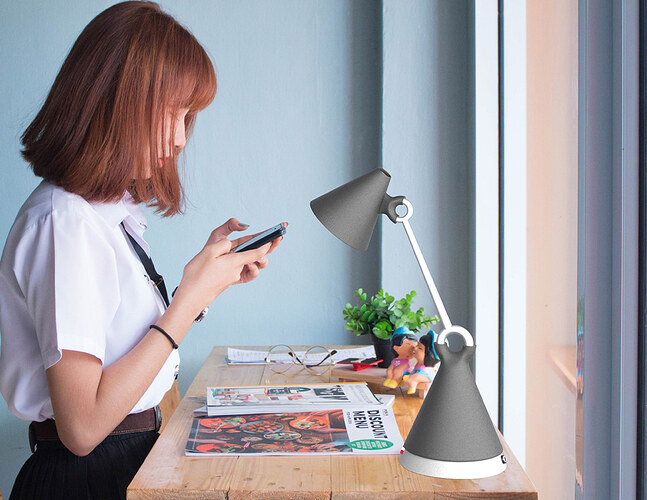 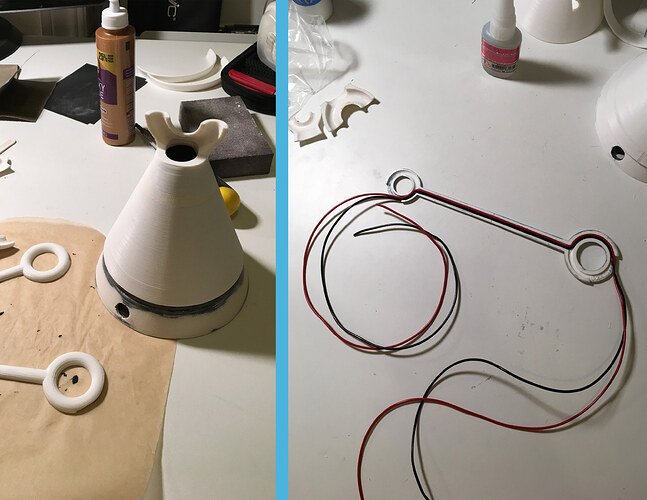 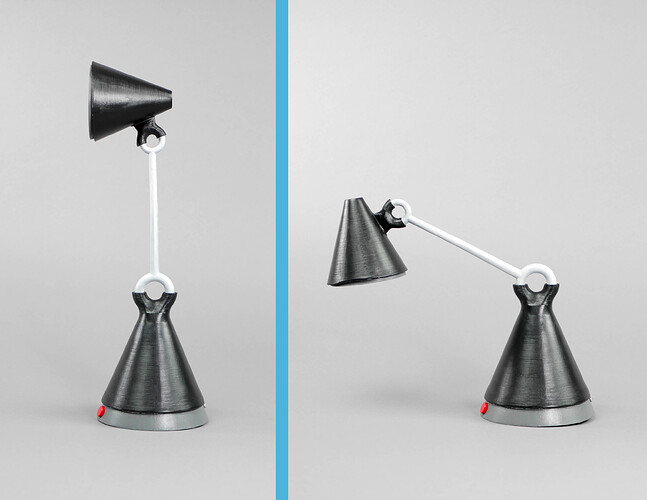 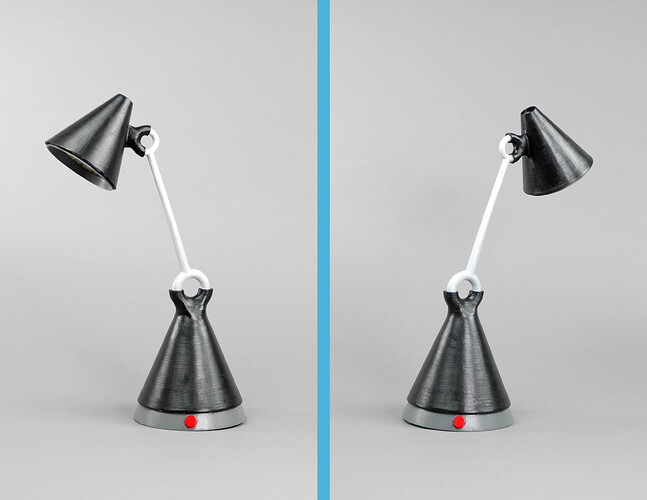 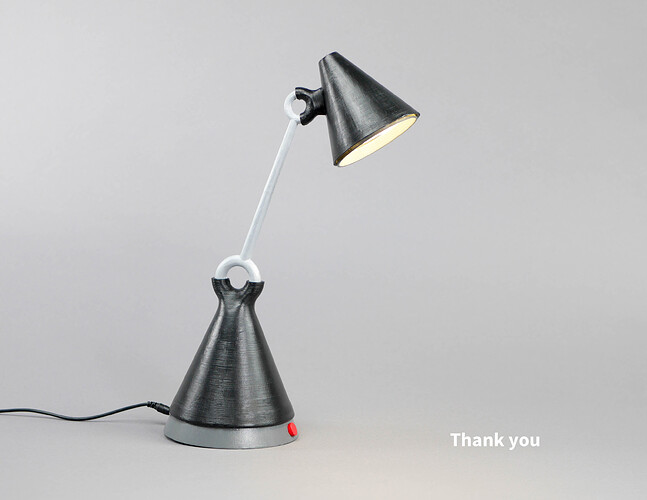 I haven’t seen much work from masters level courses, this is interesting. Potential cost/development issues aside, I really enjoy the form of the arm and its transition into the head. The base could in my opinion use some refinement. OLED’s are still pretty expensive for many applications, but You could probably use side-throw LED’s for this application and get a similar look, I enjoy the light engine integration into the shade, nice detail. If you have a passion for lighting, your undergrad as an EE and then a masters in ID in my opinion could make you look attractive to a lighting design company.

It’s all good, but what I don’t see is any refinement work with regards to proportion.

Maybe it is just me, but I find the size relationship between the head, arm and base is off. I would have liked to seen different cone angles/heights for both the head and base and different lengths & thicknesses of the arm.

Great process documentation, and i applaud the physical building. When I saw the CAD render I thought to myself, that joint is not going to work… but you proved me wrong by building it. I’m going to be super honest because having met you I know you can take it and you are a student looking for feedback. I hope this will provoke some thoughts:

What do you think? Are any of those points valid or merit some reflection? Or maybe there are reasons for all of these things I missed?

Lastly, I want to end on that this is a great use of the forum! Thanks for posting everything so meticulously so we can comment right in the forums!

I was going to comment, but Michael pretty much summed up everything I have to say.

The stick with two round loops on it could BE the iconic part of the design, but is lost.

The top looks like a regular lamp from anyplace.

The base is boring.

Can you push the loop elements further in size/feature/focus? Can the light be a lit loop (halo?!) somehow mimicking the functional part? How does it look OFF as sculpture is just as important as how it looks on. Would you want this OFF on your desk? What does it add visually or does it take up more visual space than it deserves?

I agree with most of what is said here.
But that hinge is not going to work like that. First of all: how do you make something like this? A hollow metal ring? That’s not a standard part you can buy anywhere because that would be ridiculously hard to manufacture. It would be possible to do the metal tube and ring component as one part with a lost sand casting and a lot of polishing - similar to how water faucets are made. But that isn’t cheap and far from trivial.
Also I assume it “works” on your 3d print because the surface of both parts is rough enough and they just interlock with each other without slipping, but how is the experience really going to be? Smooth sliding? How does the contact work? You just want to press it into place with the plastic parts? What happens after moving it ten times and the plastic wears out? Can you re-tighten it? If you have injection molded plastic that snaps together where will the seams be? Won’t they be right at the front where they are really apparent?
In many cases I would say “let the engineers figure out the nitty gritty details”, but in this case the whole concept HINGES (get it?

) around that hinge. So you have to deliver. And I think your explosion rendering actually makes the situation worse because it makes it more apparent that you haven’t really figured out how it works.
Also thanks to LED technology you can make really small light sources that don’t even need a big shade because they can just have a tiny lens attached that does the same thing. This results usually in dramatically smaller lamp-heads which in return also slims down the base significantly. The whole proportions just scream “lamp designed for old, heavy lightbulbs” to me, even though you plan to use crazy expensive and crazy lightweight OLED panels.

that would be ridiculously hard to manufacture.

A tubing coiler would make short work of it. The degree of finish needed to the necessary weld to connect the rings to the tube is open.

Also, lots of options for the material used for the friction hold, it doesn’t have to be the molded shell. I do agree that seams detail needs further refinement.

What if you thinned down the arm and made it where there are two of them and used low voltage so now one is the positive and one is the negative. This is already being done with lamps and it would make those arms a heck of a lot easier to manufacture if they’re not hollow.

Everything has been pretty well summed up, but my 2 cents would to be aware of how your bodies are intersecting and the subsequent transitions.

As an example, you’ve given it some thought with the bottom black semi-doughnut hinge where it blends in well enough to the conical base, but the top semi-doughnut hinge looks like it’s just tacked on to the shade and loses a bit of fluidity. If the hinge is part of the top shade, it could transition into it much like the bottom hinge. If it’s a separate piece, where it attaches to the shade could have some flair or shape to it that leads in to the top shade.

On a side note, I’ve been following your design journey for a while now and it’s great to see your progression!

Wow, thank you all for the thoughtful feedback. I appreciate it! If there’s a better way to respond to everyone let me know, sorry, it’s going to be a long one

Thanks! Our master’s program is a good blend of thinking and making which I think has been fantastic. Lighting design is something that’s interesting to me and I’m hoping the EE background could get me involved in things like consumer electronics and audio products down the road.
The lamp you posted is interesting, I considered using metal snaps to electrically connect the OLED panel to the top, but after some experimenting and seeing the high current draw of the light source, even at low voltage the potential safety hazard it created wasn’t worth the risk to me, so I went forward with hollow tube.

There was a fair bit of iterations of the cone angles, size, and lengths of the bar, maybe most easily seen in the cardboard model and red CAD concept. That said I totally agree with what you’re saying, I could have really iterated on the proportions and taken it to more extremes. I’ll do that next.

Thanks a lot for the honesty, these are all great points to think on! I was hoping to use the OLED panel’s flexibility to wrap around a frame so it could also be the shade. I scrapped that idea for a preinstalled OLED panel in the shade because there wasn’t any real reason I could justify this part being removable. You’re right, this doesn’t accomplish anything an incandescent bulb wouldn’t. My one rule was that the shade had to have a visible hole going through it to show there is no incandescent bulb. I also wanted to hold on to the traditional shade form with the idea that it wasn’t too much of a visual jump from a standard desk lamp and maybe it would make the rings stand out more. I’m realizing this isn’t really working though. I’ll have to rethink this!

You’re right about the power button and the quality of the prototype, I should have made more time for them.

The base was something that stuck with me from studying Konstantin Grcic seen in the base of Chair_One. I wanted to iterate on that swivel mechanism but instead make use of the geometry of a cone over another cone base kind of how ice cream cones are packaged. This point stuck until the final concept to allow the lamp to swivel on the base.

Personally, I struggled with being too attached to the cone form and initial design, it was something that I kept coming back to through the iteration, but it hasn’t resonated very strongly with most people. Of all the points of interest you mention, I’ve received feedback that the joint is the strongest element. This makes me more comfortable with letting this initial design go and explore more freely.

Great points! Totally feel free to sketch and post it here, and thanks! Maybe I’ll document my iterations taking this further here as well. There’s a lot of issues with the existing form, I’m kind of thinking of a totally different form this could evolve into.

Good points! When I assembled the 3d prints I actually used a few coats of PVA glue on the surface that grips the ring to give it a more tacky finish and more finely tune the friction of the rotating joint. In the prototype it ended up being fairly smooth but stayed rigid enough to keep it in place. You’re right, in the exploded view I didn’t use the more detailed, cut up parts I 3d printed to actually build it. I should update this.

Thanks for the comment and for following along, it’s been a wild ride and I’m having a lot of fun!

That’s a good point, the top surface transition you mention is something I didn’t fully resolve and what you’ve said makes a lot of sense to me.

the size relationship between the head, arm and base is off.

Tube bent interior objects are incredibly passé, but I like the simplicity and elegance of the chair you are starting out with.
That having said, I don’t see much of that lightweight elegance back in your design. And you are not respecting the circle as much by splitting it into two smaller circles as well as breaking each circle up into two materials and sizes. The circle is a much more fundamental part of that chair’s visuospatial design than it is of your design. Can you find a way to show more of the circle, perhaps it can fork around the plastic pieces.

I do understand the implementation of OLEDs to conjoin with the idea of a lightweight design in line with a friction-based hinge. Can you explore more to bring out the qualities of the OLED panel?

Nevertheless, I don’t find the idea of a friction based joint very elegant at all. The functionality of the joint is all in the materiality and you have to start early researching this and generating a proof-of-concept to show your concept is even viable.
Which materials are you going to use and how much momentum can they bear based on their static and dynamic friction properties? Also you have to take into account manufacturing tolerances and variations in thermal expansion between the metal and the plastic. A silicone insert piece will be a good solution to ensure a minimum amount of static friction, can you find other means to ensure consistent functionality?

I like the power button, very simplistic. Why red?