Does anyone know good alternatives to magnets? Costs for magnets have risen slowly over the years and it does not show signs of slowing down.

Not sure if this would apply but If it is a moving application Eddy Currents for moving parts (use aluminum rails) a much cheaper option then magnets.

Just a magnet attached to a piece of plastic that holds a piece of paper on a dry erase like board.

That 3m pull off tape stuff.

Seriously, use either one of these. Plastic to paint has great adhesion.

Maybe I shoud have mentioned that it needs to be reusable. Similar to Ghecko tape but not in the fact that it actually has to hold for a significant amount of time and needs to be cheaper. I would like to be able to eliminate the magnet and the metal behind the board if possible. Biomimicry directional adhesive like materials. See wiki below. 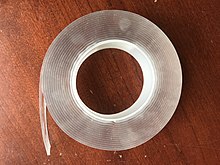 Nano tape, also called gecko tape; marketed under the name Alien Tape, is a synthetic adhesive tape consisting of arrays of carbon nanotubes transferred onto a backing material of flexible polymer tape. These arrays are called synthetic setae and mimic the nanostructures found on the toes of a gecko; this is an example of biomimicry. The adhesion is achieved not with chemical adhesives, but via van der Waals forces, which are weak electric forces generated between two atoms or molecules that are ...

So, you’re concerned with rising costs of magnets? Yet, unproven, potentially theoretical adhesives are within budget?

I would agree that magnets costs will continue to rise, but will they rise at a rate higher than other material costs? With the application you’re describing, the strength of your magnet probably doesn’t need to be very much… you could get some cost savings by dialing back the strength a bit.

A perfect application for either an indentured servant, or an intern … it could be argued that there isn’t any difference between the two.