Just started a new gig and trying to find a good setup for my work flow.
At the moment I am looking at the Mac Mini that can handle Rhino/Keyshot besides the Adobe CC and thought this might be a decent setup?

I am a little worried about the fact that it is only Dual-Core. How important is the number of cores for specifically rendering?
Any thoughts?

Thanks for your help! 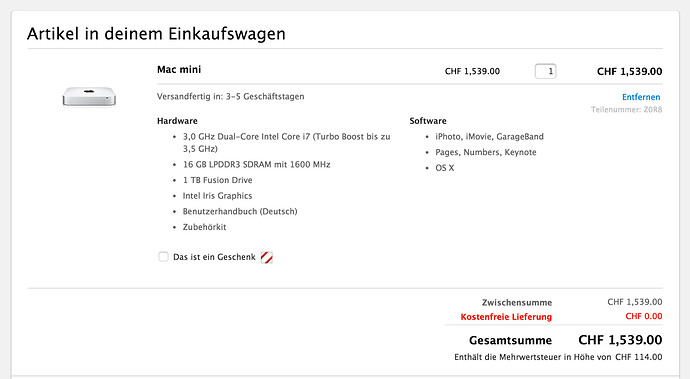 I think Keyshot renders off the CPU, so the more cores the better. You’re never going to have enough processing juice to make a rendering powerhouse with a Mini, but if that’s not a huge part of your workflow it should be serviceable. I would worry a little about the durability of the Mini, though. Using even a couple of Adobe products at once uses a lot of processing power and RAM, and I don’t know how long a Mini would last running at full capacity all the time. If it’s not in your budget to have a separate rig specifically for CAD/rendering, I’d at least make the jump up to a more powerful iMac.

If you’re simply trying to save cash, go the Apple refurbished route. You’ll get more machine for a better price that way. Don’t under buy your technology.

I don’t think you’re going to have a good time with that computer, it’s really not a good value. It’s only a dual-core and lacks a dedicated video card. Last year’s model had a quad core - if you could get it used or refurbished and upgrade the ram and get an ssd for it, it might be a better deal. Just within Apple’s own lineup it’s not good value. You could get a quad core iMac at the same price that would still outperform it - sure less ram, no fusion drive but it comes with a display and mouse/keyboard.

If you’re on a tight budget, have a look at the refurbished store. You could get a very nice iMac for the price. 15" Macbook Pros in the same price range would outperform it as well.

As for the get a PC response, you could get an insanely powerful machine for 1.5k$.

Thanks for the responses and advice! Much appreciated.
Mac Mini really doesn’t seem like the smart choice here.

I think I’ll re-open the discussion around a PC again.
I’ve been looking at this thread for reference

In my experience the Quadro graphics cards don’t function any better than the much, much less expensive GeForce cards. If you ever switch to something like Bunkspeed, which can render off the GPU, you will get a lot more bang for your buck in terms of CUDA cores, the main driver of how quickly and effectively you can render off the GPU. I run dual-SLI GeForce cards in lieu of a Quadro (for Solidworks, Rhino and Bunkspeed) and couldn’t be happier.

Looking at your portfolio (really like it, bentobox too!

) it seems like you’re working with fairly small assemblies and spending lots of time in keyshot and possibly even more in photoshop.

Sadly all those programs have different needs… Rhino will work best with a workstation Quadro type card, keyshot will work best with a faster CPU and Photoshop needs a bit of everything, lots of ram if you’re working with several high res layers but it also does some operations from the CPU and some from the GPU, but it’s not discerning between GeForce gaming and Quadro cards. However, those GPU accelerated features are mainly filters which aren’t used all that much. However, the Illustrator viewport can be GPU accelerated - possibly solving the stuttering issues when zooming and panning.

Starting with the CPU, the quad-core 4790(k) seems to be the sweet spot right now. The six core CPU are quite a bit more expensive and need a more expensive motherboard and don’t seem to offer much better performance. For ram, 16BG seems like a good starting point. If you get a motherboard with 4+ ram slots, you can always add another 16 or 32GB later on as prices drop.

But the real toss up is the graphics card. Would you benefit from GPU acceleration and prefer a gaming type card which will give you roughly 4x the performance for the same price as a workstation card which would give you better stability in Rhino. In my experience with Solidworks, it can run quite large assemblies smoothly even with a very basic video card. Though there’s nothing stopping you from buying a workstation card now and adding a gaming card later (maybe if you switch to rendering software which is GPU based).

A gaming card will do fine with accelerating Creative Cloud and Rhino is not critical of the type of GPU. Modern GPU’s have so much horsepower that you shouldn’t need much more since the world of CAD hasn’t evolved that far.

Other then that the rest of Louis’ advice is spot on. Jumping to a hex-core CPU is great if you need serious productivity boosts, but in reality, you would be better to buy a Keyshot render node and render on a networked render box rather than tie your dedicated machine up with renderings.

We added a 32 Core render server to our studio and it’s fantastic since you can offload renders and animations and let them queue up and render, rather than having your machine be unusable for hours.

I’ll keep you updated on what IT, management and I decide.

One thing to keep in mind is that some render packages will charge you more for render nodes, so that may add to cost when considering that route.

I also recommend the PC route if you are going to be rendering a lot. The cost of technology will be significantly cheaper and more configurable to your specific needs. We have a few different configurations here at work. The E5 machines are excellent, but for the cost I would go with the 4930. It really is surprising how fast that is for being a consumer grade card. And as mentioned, you dont have to get into server motherboard so you will save some money there. You can get also get some motherboards with 8 RAM slots in them if you would like to upgrade later.

In terms of video cards, most of our machines are on k5000’s, but we do have a few with multiple GTX970 or 980. To be honest, we dont have any issues with any of them. I have yet to run into any errors with anything. However, that may be due to the software I am using, so your results may vary.

We primarily use Max and vray as well as the Adobe stuff. However, we have also ran Rhino, autocad, sketchup, octane, corona, and a few others. I havent loaded up Solidworks on any of the GTX machines, nor have experience in keyshot on them.