Six Maasai warriors are planning to run the London Marathon to raise money to find a water source. They plan to wear homemade shoes constructed from cut up car tires. 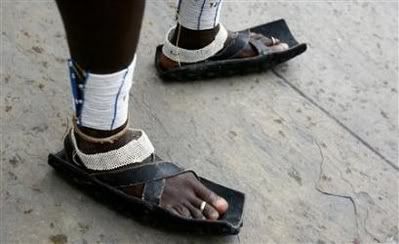 For anyone who hasn’t heard of the Massai, they can literally run for days. They are naturally amazing athletes and may kick some serious butt at the marathon. Some shoe company should donate running shoes for their cause.

That is fantastic!
I wonder if running shoes would actually be a handicap for them.
I mean, if they’re marathon material in those things, they must have some seriously strong feet. Putting a high tech over-designed pillow on their feet might do them more harm than good. Maybe they would be better off with the equipment that they know best.
But WTH do I know?
Yo, maybe you can hook these guys up with some Frees.
That would probably be the least alien thing for these guys to run in.
What do you think?

Natural runners? It’s gotta be the shoes!
All of us that let bad weather, old shoes, and other excuses keep us from running how we should can now go jump off a cliff. I am truly embarrassed, off to the gym I go.

I wonder if running on asphalt will hinder their ability to run well. If they are used to running on packed earth or grassland, it may cause shinsplints or other problems. It would be an interesting design challenge to design a running shoe/sandal that specifically addressed their running style and preferences.

Hmm, a few assumptions above that aren’t quite spot on. Maasai do, in fact, walk and run on asphalt all the time, although walking is by far the preferred mode – northern Tanzania and southern Kenya have several tarmacked highways that receive plenty of foot traffic in addition to vehicles.

Judging by what I’ve seen, I wouldn’t think the footwear’s a big issue. East Africans from all sorts of different tribes regularly walk and run long distances in flip flops, often carrying heavy loads, and don’t seem to suffer from an abundance of injuries because of it. Much of the cushioning comes from fat deposits in your feet, and provided they’re protected from rough or sharp surfaces, they seem to do fine once you’re accustomed to it.

I actually had a pair of tire sandals when I lived in TZ, and they’re surprisingly comfortable once broken in. Tough as nails, too, and you can customize the outsole with a sharp knife!

Maybe we should donate some of these…

Wouldn’t the statement they’re trying to make be less powerful if they had running shoes?

This is the website where people can donate to help them out.

That’s what puzzled me about the Toms website - I don’t see much point in donating shoes to people who don’t need them. My friend was brought up in the Sudan - she says whenever they were burgled, they’d steal all your shoes, because they knew you couldn’t chase after them barefoot. I have a fab pair of goat /cartyre sandals that a friend had made for me in Burkino Faso (sp?)