I read that all German luxury cars sales were down in the US, so decided to look at the numbers. It’s interesting:

Just for fun, Acura was +2.8%, albeit with sales about half of what MB does.

I really thought MB was hitting it out of the park in design. I think I would drive anything they make right now, but obviously I am not the average US car buyer. Audi / BMW are steady, which is probably not where they want to be. However, I guess that’s positive for them considering their sometimes questionable design decisions of late.

If you break those numbers down most of the growth is in their SUV sales (BMW recently launched the new X3 & X5 compared to the slightly older Q5 and GLC). SUV’s were up 13% in 2018, cars were down 4%. They just re-launched the 3 series as well, so I’d expect their 2019 car sales to pick back up as well as everyone wants to jump into their new 3 & 4 series.

Probably Tesla is taking a big chunk of that market.

I read an article that said just the model 3 outsold the entire MB lineup last year, so that Tesla comment is true. There were some unique market forces driving that. Specifically, there was pent up demand from a 2 year wait list, and there was really no competitive product. Analysts are wondering if the sales will be as strong once the backlog is filled. My guess is no.

I think it will be interesting to see if the Porsche Taycan has a similar launch bump. My thought being that there are a lot of Tesla Model S owners who have had their cars 5+ years. The tech has moved on but the Model S hasn’t. They haven’t upgraded to the Model X (because, look at it…) and the Model 3 is a downgrade.

The Taycan will also be a slight downgrade in base spec to the Model S but the “Turbo” Model (Turbo? Really? It’s a friggin EV… but anyway) will be priced above the Model S. So there is a potential market ready to buy and it is a Porsche, so you will have dealerships everywhere and the bumpers will probably stay on. Against my expectations they crushed it with the Panamera and I think the Taycan will do just as well.

Certainly it is catching up and if the Q4 sales continues, it would be close in 2019.

Have you seen MB’s latest campaign trying to get millennials?

Have you seen MB’s latest campaign trying to get millennials?

As a millennial even I don’t get millennials, and most of them don’t care much about cars. “Hey Mercedes, find me an Uber” 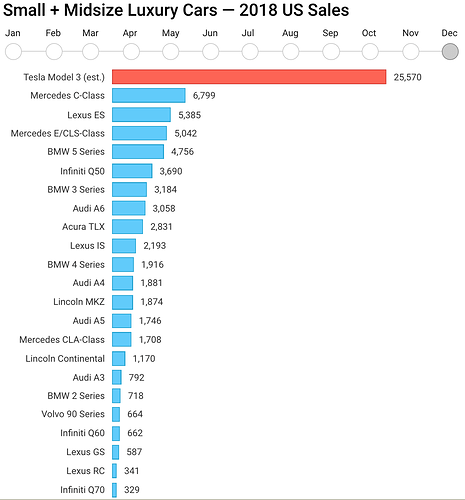 The Mercedez campaign is funny. I think the brief was:
“Let’s show all the stereotypes of Hipsters we know of and then show a Mercedez (that looks the same) with a $30K price tag.” then they all went home on their Model S’s.

Hey Mercedes… how about a car for us? … shows picture of a VW GTI…