This summer I’ve been spending a lot of time focusing on footwear design. I’m looking to build up my skills, knowledge and portfolio in time for my first placement Easter 2008.
I want to spend time on a large project as a portfolio piece that I can do this summer.

Being a proud Londoner I’m all about Luol Deng. He’s really proved himself this year, especially in the playoffs. Not at the caliber of a signature shoe player yet, though being Englands no.1 and London 2012 ambassador he deserves his own shoe in my eyes…

Inspired by ak47 I’m going to post my work up here as I go along. Hoping for some good feedback…

I’m gonna’ start with a number of images for inspiration. Stay tuned.

London Black Cabs. Couldn’t get more London than that. Not your typical inspiration car but there’s pieces on there that I really like and could work with. Such us the front grill and I really like the swooping shape of the ‘TAXI’ light. Next door neighbours a cabby so could get some good close ups.

NYC has AF1. LDN has ^^^. I don’t know what got everyone wearing these. But JD and Footlocker always stock a bunch of colourways and you’ll see them all over London. People don’t tend to use these for to ball in, just round and about laced up all crazy. Inspired to create a shoe that is a high performance basketball trainer but can be worn like the trainer huarache with a pair of jeans and phat laces and big loops.

London Undergound. Got some good ideas for the outsole.

So there’s a few inspirational ideas. would like to hear what you guys think and if you can think of anymore.

looking forward to your sketches. difficult to comment more without seeing anything.

Here’s some sketches. Just looking at routes to go down at the moment. Going to look at developing that front ‘grill’ some more and if I could use it to boost performance, such as fastener large strap sort of thing.

Going away for a few weeks so won’t have access to a scanner. I’ll still be sketching but will have to come back and post more up in August. 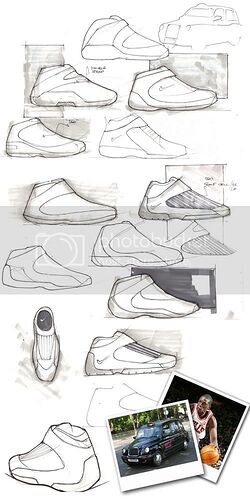 Ok I got some more. This was done few weeks before the stuff above. Was my first time using markers in a footwear render like that so go easy lol. Kinda’ got stuck on this idea and wasn’t really feeling it. Just pushed it aside and tried to find another direction. Thought I might as well put it up though see what you guys think.

Look forward to some feedback and advice… 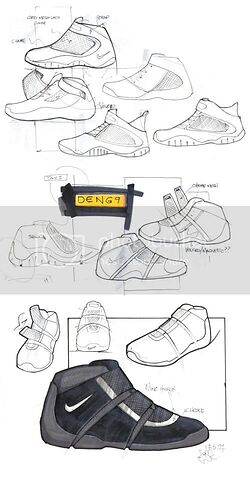 nice sketches, you have some cool inspiration there; though i can not say that i see it in the sketches, but that could be me…and ins’t luol originally from sudan? even though things are pretty bad over there now, maybe you could take that into account some how for the shoe? sig shoes (the good ones at least) tell a story, luol’s is a pretty inspiring one. i know you are (or seem to be) a proud lodoner, but you should maybe try to get all of deng’s person in there…

JungleBrodda - Yeh Luol is originally from Sudan. Though he came over to London young and learnt the game under Jimmy Rogers at Brixton Topcats playing for the England juniors, also was involved in the England football youths too. I decided to just focus on London though, being with the whole 2012 hype going on right now and Luol being Englands best. Though I’m going to have a look at see if I can work anything in, its a good idea.

To be honest the sketches above are early sketches when I really wasn’t thinking about inspiration as much. Pretty much had the taxi in my mind and thats about it. Though I’m going to develop it with more in mind.

at last a designer who has decided to take inspiration from an object that isn’t an i-something or other.


Looking forward to seeing the progression of your sketches.

Nice project so far, I like to see a little background and inspiration mixed with a lot of sketches. I also like to see you sketching toe downs and some 3/4’s… toe down is a very important view. Don’t forget to start working up the bottom. It is important to think of it as a 3 dimensional object.

Watch your proportions, a lot of them are getting a little too full in the midfoot. I also see a lot more LeBron pieces than the huarache, and show me the taxi cab in something other than color. London Taxies have a mix of rounded and squared off forms, organic to somewhat geometric, modern to retro… work with that… also, you show the rubber coming way up the heal, this would make the shoe very heavy, anything higher than a Jordan XXIII and you will have to use some tricks to make it lighter…

Great work so far, keep rolling with it!

Here is a quick proportion template for you. 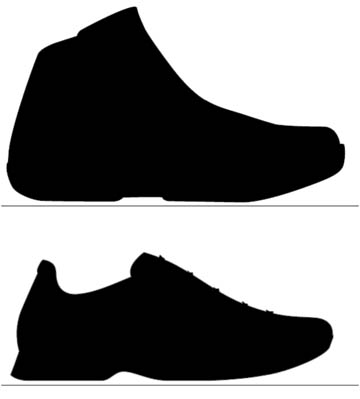 Thanks for the advice Yo. What do you mean by town down? I agree about the 3/4 sketching. Got to do more. When I do them though I always use a printed template of an exsisting shoe and I feel I’m relying on templates to much. You think this I should avoid doing that?

Funny you mentioned Lebrons, one of the main reason I chose to go another route than the marker render above is because I thought it looked to much like a pair of Lebrons. lol.

The design I’m liking most at the moment is the sketches closest to the little pictures of luol and the cab.
The main inspiration from that came from the top of the cab:

I don’t know why but I really like the shape, and it inspired the swooping in that sketch. The grill-like lace cover is from the grill at the front of the cab. Thanks for the advice about the rubber Yo, didn’t relise that.

Not going to get stuck on this one though, going to explore some more. I’ll be back with a loada’ sketches in august when I’m back at home. (unless I can find a scanner somewhere). Thanks for the templates too.