I just got the Lunatik Chubby stylus, I really dig it. I thought a would like heavier metal styluses but I kept dropping mine on my iPad screen with a horrifying CLACK.

A few things: it’s smaller than I expected. It is, of course, geared towards children. It’s like holding a jumbo crayon. The handle has a TPE (?) over mold. I’m not sure because it feels nicer than a lot of TPE over molds I’ve handled. The black part is the capacitive material that you actually have to be touching for it to work. The tip is hollow and flexible like all other styluses. For some reason I expected it to be a solid, hard tip.

I really like it. It’s charming, has a good weight to it, interesting textures. Two thumbs up. 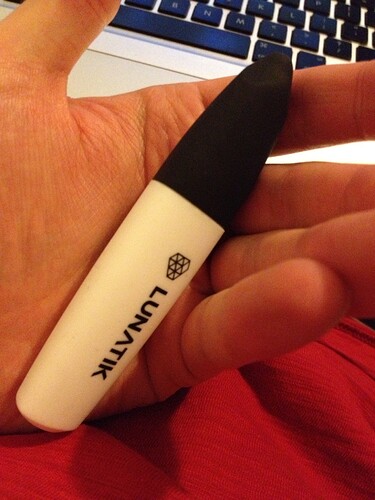 the branding is a little in your face. Looks neat, I have a few ipad stylus’, including the lunatik plastic pen. One of my plastic lunatik pens broke in half at the threads…

I take back saying the form looks neat. It looks comfortable. The overall execution here looks like a departure from the lunatik brand (so far), and reads like a highlighter you would get at a trade-show.

I’d be up for trying this one out, I have a Al one from the core77 shop and it is nice, but the smooth anno service can slip out of the hand.