I want to know if I am the only one that saw this and though, “Wow, the Chinese are getting better at car design?” The front is nice, definitely unique. The rest of the car is OK. Back is kinda weird with that low trunk shut line. Perhaps it will be better in person. I like the interior, but if you told me it was an '89 Oldsmobile concept, I would believe you. Or maybe Dodge. For some reason, I can read, “Intrepid” on the steering wheel. 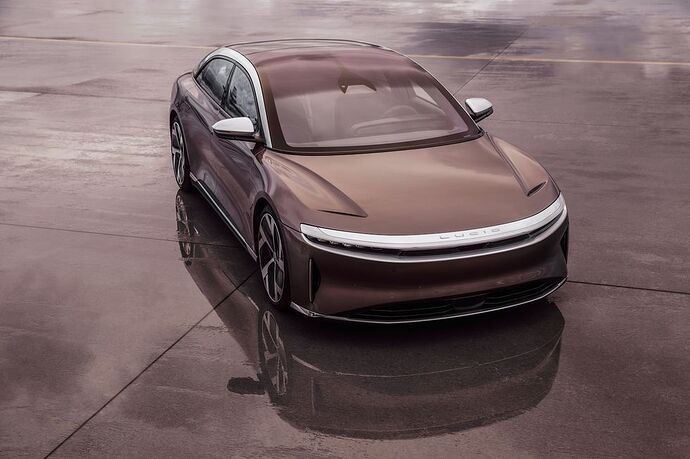 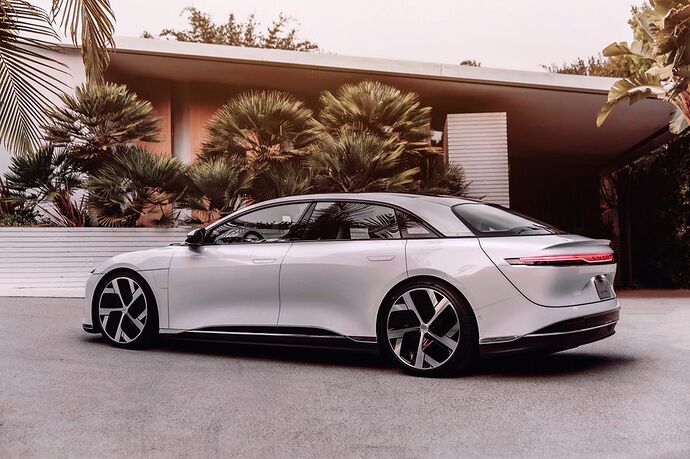 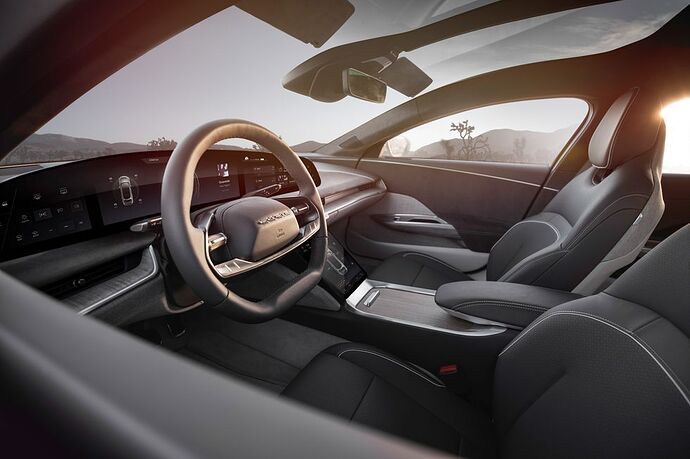 I had never heard of Lucid when I scrolled past an image reveal on LinkedIn. Just like you I thought “That looks pretty nice” quickly followed by a “meh… so why don’t I like it enough to care or look into it more?”

I don’t think they are bringing anything new, except maybe that full width shiny hood-grille-nose cone treatment. The rest is a nicely restrained pastiche of Porsche, Nio, Tesla, Jaguar, and M-B electric styling cues. Maybe we are just ‘triggered’ by factory-level rendering horsepower.

Digression: I don’t know what new electric car brands mean anymore - what are they trying to achieve with their styling? “We are vaguely everything-else looking, don’t think of internal combustion, dont try to get too far away from other competitors or people won’t know what to do.” Give me that Cybertruck already.

I saw this a couple of years ago in person and met the head of design Derek Jenkins. “Wow, the Chinese are getting better at car design?” is kind of irrelevant in these global orgs. https://www.lucidmotors.com/company/leadership/derek-jenkins/

I really liked it in person. Super nice.

Design is relatively easy to get better at. Hire the best design people, pay them the most money, and put solid design leaders in positions of influence. New companies are not starting from a deep organization where design was what happened once the engineers were done engineering.

Now if the sentence was “wow the Chinese are getting better at building cars” that would be something of note.

slippyfish: I do find it weird that “the market” feels like we need new companies to build electric cars. Tesla at least builds cars. Some of these ventures have renderings and a clay model and seem to get a lot of attention and investment years before building anything. Adding to that…the European makes are all making electric cars now: Peugeot, VW, BMW, Audi, Volvo and the others are working on them like made. If the future is electric and it will be fabulously profitable, why not invest in a company that has 20% market share and 100 years of experience over 4 pimply kids in Sunnyvale?

Yo: I’m defining “Chinese” as Chinese domestic make that’s making something for the Chinese domestic market. You’re spot on that the talent field in car design is very flat globally, but for some reason, there are still some ugly cars in China.

I like this Lucid. I saw a comment someplace that it feels like it could be a new Citroen DS and I think that’s spot on. Feel fresh, and new yet not weird, a bit of Porsche Panamera perhaps… 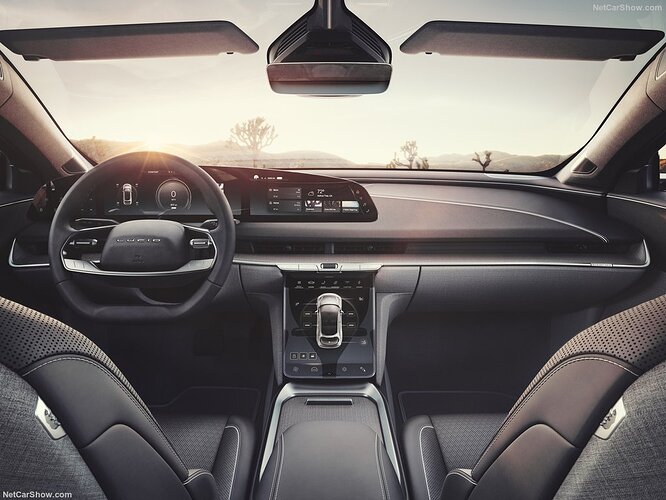 It has been an interesting week in the world of luxury car interior design and execution, with the unveiling of two products with two very different design philosophies.

That’s a good overview of some of the challenges and advantages between IC and electric luxury auto interiors. Only one of those cars has been profitably* built at mass production levels for several decades. The Lucid is also much, much ‘busier’ inside than a Model S or Model 3.

Seems somewhat ironic that the ‘flash’ we’ve been decrying in the luxury Euro brands, ostensibly to appeal to the Asian and ME markets, has been removed from the Asian manufacturer’s vehicle. Mr. Jenkins is doing us all a solid!

Yo: I’m defining “Chinese” as Chinese domestic make that’s making something for the Chinese domestic market. You’re spot on that the talent field in car design is very flat globally, but for some reason, there are still some ugly cars in China.

For sure, you are absolutely right… I was just trying to say (poorly) that this is a Chinese funded car, but not really a Chinese brand. You can tell the Chinese owned brands with global teams. Lynk for example has a team in Sweden I believe. And Lucid is a very diverse global team.

Is it? I thought it was from California? I should read up more before posting!

They are based in CA, but I think the team has folks on it from all over the world.

It may not be my “Style” but I like it. I like some of those quirky French feeling details that you guys mentioned, like how the front glass flows all the way up and over into the roof. Feels very sleek, streamlined without it being super overworked, or needing to be a crossover like the Faraday Future.

I heard it’s also dimensionally huge in person, which may give it a much different visual presence when comparing it to a Model 3.

And 1080+ horsepower…wow. If these don’t catch fire then watch out Bugatti.

I think we are mistaken in thinking or assuming that Lucid is funded or owned by a Chinese company. It sounds like the primary investor is Saudi Arabia.

“Rawlinson said he believes he can successfully navigate the partnership despite the nation’s record of human rights abuses.”

Does virtue signalling extend to buyers of $160K sedans?

Ah, my mistake if so. Thanks, Sean.

Ah, my mistake if so. Thanks, Sean.

You weren’t completely mistaken. A Verge article from 2017 listed a number of early China-based investors (including Beijing Auto), but the big $1.3B silly money came from Saudi Arabia, a few weeks before SA had Jamal Khashoggi killed. The $1.3B bought a majority stake in Lucid.

It would be like saying Volvo is a Chinese company.

I’m so glad I’m not an entrepreneur that needs to beg for money from dictators.

Sorry for the shift in conversation, but I just wanted to say that I’m happy to see the trunk shut line so low. I’ve been very frustrated in the past by trunks and hatches that have a lot of volume but are really hard to access.

I think it is really nice to see how much they turned that into a design detail with the entire tail lamp assembly lifting with it. I assume there is a second light array in there because in the US it is the regulation that a certain amount to red light in the rear must be stationary… the thought being if you are pulled over on the roadside at night with your trunk open they want an illuminated red lamp to warn other drivers.

I think it is really nice to see how much they turned that into a design detail with the entire tail lamp assembly lifting with it. I assume there is a second light array in there because in the US it is the regulation that a certain amount to red light in the rear must be stationary… the thought being if you are pulled over on the roadside at night with your trunk open they want an illuminated red lamp to warn other drivers.

Yeah, you can see the two lower reflectors in some of the other shots, assume those are LED backlit like they do on the Audi’s.

Agree to have an extra-wide trunk but a narrow opening is miserable. Nothing like trying to Tetris everything in and then not being able to reach the stuff on the sides.

BTW their online configurator is one of the best I’ve seen lately, but maybe I’ve spent too much time shopping for old BMW’s.