If you’ve ever owned an older Brit bike or automobile you’ll understand … with apologies to our UK friends.

LUCAS* electrics don’t use electrons; they run on smoke. When something breaks the smoke leaks out. Thankfully positive-ground replacement smoke is available. 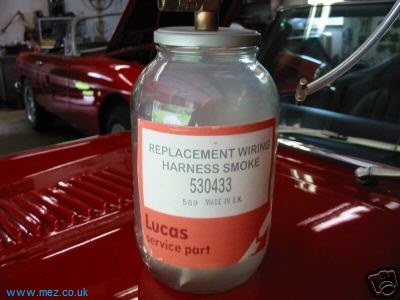 That was a good one. I’d buy one of those refills on Ebay, for sure…

does one require a left handed smoke shifter to use this?

does one require a left handed smoke shifter to use this?

No, but you need a Dzus tool to open the lid.

You’ve probably heard all of these…

ELECTRICAL THEORY BY JOSEPH LUCAS
Positive ground depends on proper circuit functioning, which is the transmission of negative ions by retention of the visible spectral manifestation known as “smoke”. Smoke is the thing that makes electrical circuits work. We know this to be true because every time one lets the smoke out of an electrical circuit, it stops working. This can be verified repeatedly through empirical testing. This has been referred to as the smoke theory - when the smoke comes out its finished, cooked or kaputt.

The Lucas motto: “Get home before dark.”

Lucas - Inventor of the self-dimming headlamp.

The three-position Lucas switch–DIM, FLICKER and OFF. The other three switch settings–SMOKE, SMOLDER and IGNITE.

If Lucas made guns, wars would not start.

Back in the ‘70s, Lucas decided to diversify its product line and began manufacturing vacuum cleaners. It was the only product they offered which did not suck.

Q: Why do the British drink warm beer?
A: Because Lucas makes their refrigerators.

And remember: “A gentleman does not motor about after dark.”