I just started a new project, kind of a combonation between web design & marketing.

I had to make this company a logo, Serenity House. These are what I have come up with. There are no restrictions on color scheme or anything I’m pretty much building from the ground up here… 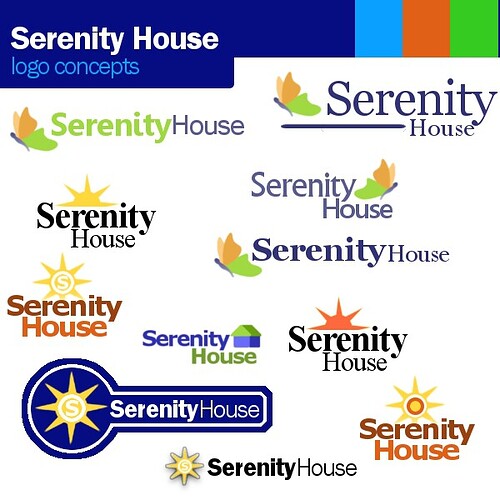 The name and identity all feel like your company is selling insurance…not graphic design.

They are all nice designs, just missing the aesthetic and messaging for the type of company you have.

I immediately thought this was for home owners insurance. They look great in that sense, but thats the only emotion I get from the designs.

You could start by telling us what Serenity House is.
It sounds like an insane-asylum.

Which element do they want to project, “House” or “Serenity?”

Good point CG…I kind of assumed this was for his company doing web design and graphic design, etc.

If this is for someone else, what is the company’s business?

overall, not bad. OK use of type, colors, graphics ,etc. but nothing wow, IMHO. some more info on the company would help better evaluate it.

only comment i can really give at this point is the colors, fonts and butterfly feel very Windows Vista/98 to me.

haha. true. also i find serenity is one of those words that just always looks misspelled. maybe its just me… its a little easier to read in a sans serif face, of a font with more consistent stroke weight, but in some of them i keep reading a “c” into the first “e” of serenity making me think its screnity or something (not that that makes sense either).

You could also check out pantones book on the meanings of various colors. You can avoid the insurance/banking look by avoiding certain colors, among other things. Unless it actually is an insurance company, that would help to know as well. The butterfly does look like some sort of software icon.

ok I just googled it, and is it the rehab on addison in chicago?
if it is that you want softer colors that reference medical/health and also calming. the butterfly is too bold the way it is I think, make it more soothing, anyone agree? the bold colors don’t feel like soothing,relaxing healing to me. you may also want to reference change, as in change in someones life. The banking colors talk about stability and being solid and unshakable, and while that is what you may want in the lives of the patients, you don’t heal at a bank, think spa not fortress.

Hey thanks for all the replies.

They don’t really have colors, so I kind of went with what I thought looked decent.

I don’t get what you guys are saying about the insurance thing though. Why do they have that kind of look? (What makes them that way? Colors/layout/etc)

Hey thanks for all the replies.

They don’t really have colors, so I kind of went with what I thought looked decent.

I don’t get what you guys are saying about the insurance thing though. Why do they have that kind of look? (What makes them that way? Colors/layout/etc)

i think the “insurance” thing is just something to do with the “middle of the road” style you’ve got. nothing offense, nothing memorable, not too bold, slightly historical (serif fonts) but a bit friendly. either insurance or banking.

Ya, I am not feeling these logos for that kind of environment. They do have a feeling of stability to them…but more from a banking standpoint. More masculine and stoic as opposed to safe…in a “hug me” sort of way.

Its the colors also, banks use blues, the darker the blue the more power/authority/stability you have until you get to navy blue and that really black blue which are both used for police and firefighters.

that light bluish green they use in hospitals is for, hospitals. Maybe research other companies that are similiar. Put together a board filled with logos from these other companies. Also look at some banks and insurance companies, and some of your logos look like theyre for prescription allergy medicine (the butterfly) to see what that looks like as compared to what it should look like.

Font or typeface use is also important in this.

It gives feeling an direction.

The ons You use (and the microsoft one) is clean cut but bland like “Ariel” or “Helvetica”.

The other ones thick/thin with extra end lines (dont know the namen in Englisch) like a font like “Times”. are not modern…but old. Giving a feeling of tradition and stability.

I like the butterfly better than the sun, expressing a transition better.
Positioning feels to low at the moment and the shape could/should be better.
Using to much color also does not work for me.

Make the logo also work in Black/white. I try to do that also.
if it works B/W getting the color right is most of the time more easy.

I think the feedback is fair, ans they do convey a “corporate” feel.

I like the butterfly and colourways you have going on, but I think you need to aim for a more friendly, charitable, appearance. Check out Greenpeace, the Racial Equality logo (UK based) and similar.

I look forward to the developed work!

I had some free time and did these. Don’t know if it will help but it’s a little different direction than you had. I think the butterfly needs to be set free if you know what I mean. I have limited fonts so I didn’t explore them fully.

I agree with letting the butterfly free. You were talking about renewal and starting over, Thatâ€™s what you need to think about when it comes to this butterfly. At the moment it is very stationary and doesn’t have a lot of energy. Maybe think about having it appear to be flying away or coming out of its cocoon. Another idea id to some how incorporate the lettering in with the image. Maybe somehow there is a flower blossom that the butterfly is sitting on.

I guess what I am saying is try a bunch of different options. Donâ€™t just stick with the same design and design elements. By looking at different options you can start combine those elements to come u[p with a stronger design. Also throw down some sketches. Even in logo design this helps in quick idea generation.

its starting to look like a hotel logo, which is probably moving in the right direction, lol, but still no

What does the color red represent? love, violence, passion? all of these things are very extreme right? find some colors that communicate moderation rather than extremism. Over indulgence is probably what they are trying to avoid.

Fonts are free on the internet, look some up.

Unrelated to this discussion, we should start a Smokey the design bear, “only you can prevent bad design, (and also forest fires).”

I guess what I am saying is try a bunch of different options. Donâ€™t just stick with the same design and design elements. By looking at different options you can start combine those elements to come u[p with a stronger design. Also throw down some sketches. Even in logo design this helps in quick idea generation.

good point. im not sure if perhaps you did explore other directions, but normally when im doing a logo i try to generate at least 5-10 totally different directions in addition to variations of each. for example, one more contemporary in sans serif fonts, one traditional with serifs, one radical/abstract, etc. i find this exercise helps you determine the best “fit” in look and concept to be then further refined.

what you have is going somewhere, but i think addressing some other looks would be interesting. i could, for example see something a little more minimal, perhaps even just typographic that could represent the calm of the center, and make it perhaps more personal than something that looks like a corporate identity (ie. hotel, bank, insurance company. as well, i believe adding some more depth into the concept (ie. hidden shapes, details, etc.) would be a nice touch to give the viewer a feeling of “time spent with the brand = result”. what you have now is pretty 1 dimensional (btw, im not talking literal depth ie. 3d, but more a complexity of concept).

What does the color red represent? love, violence, passion? all of these things are very extreme right? find some colors that communicate moderation rather than extremism. Over indulgence is probably what they are trying to avoid.

Fonts are free on the internet, look some up.

This is my work computer so I just use the fonts that are on it.

I disagree with you on the red. The people who go to rehab have something extreme in their lives. They need to cope with it so why not use it as an element? The curves of the box and the shape of the butterfly juxtapose the red (extreme) color and subdue it making it calm and relaxed (which is what the facility should do to the patient).

The logo doesn’t say extreme to me at all. If anything, it could be used for a minimalist Asian furniture company.

I did those designs in about 15 minutes along with a few other ideas. It’s far from finished but like they say, a picture is worth 1,000 words.

Oh, well in that case, they look about like the time put into them, and yeah I guess thats about all a logo needs, a picture and some text. You already know they need some refinement so good luck.

What a smart ass reply! This isn’t my project by the way. I’m just helping the guy who started the thread.

I’d like to see what you come up with in 15 minutes!