We had a big day here in our HQ in Switzerland today as our new brand language and philosophy was launched globally.

From our press release:

"Today is a big day. You don’t know this, but things have been changing behind the scenes here at Logitech, and today, we’re happy to tell you about it. We are unveiling the biggest brand transformation in Logitech’s history.

Meet the new Logitech, a company you know and trust, but now with a colorful new attitude and re-imagined logo you’ll love. And, meet Logi – our new label.

While our commitment to excellence in peripherals hasn’t changed, we’re dedicating focus on design, hiring our first-ever chief design officer, Alastair Curtis, and delivering products that create amazing experiences in the everyday places of your life. We’ve put design at the core of everything we do and everything we are, from our products to our brand identity.

On top of a colorful and bold new look, you’ll start to see and hear the name Logi. The Logi label will appear on our newest product categories, and expect some twists and a few surprises in new categories. (Get ready – the first Logi product is around the corner!)"

And a little video for good measure: 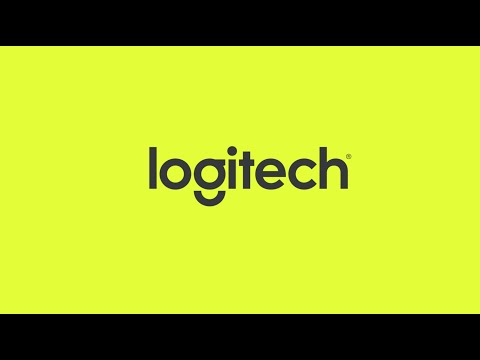 It would be great to hear what you think, given that most if not all of use have used or are using one of our products on a regular basis and have a certain connection to the brand.

Interesting, it’s hard to judge without the Logi products. As far as I’m concerned, Logitech has always been a leader when it comes to computer peripherals. Some of your latest products like the Master MX and G602 have really caught my eye. However, the branding had been getting very stale, the weird eye and hand thing I reminds me of the first time I touched a mouse. While meaningful as a brand, it reminded me of using a computer in 1995.

As KenoLeon has mentioned, the companies naming strategy and branding feels like 3 different companies right now. Consumer, gaming and UE. To me, the new logo doesn’t unify everything but rather adds yet another label just confuses things further for me. Also, the company logo will match the Logi logo while it doesn’t seem to fit the rest of the company.

The new Logitech logo and Logi brand feel like this young startup pitching something on Kickstarter - trying to hide a lack of experience behind a polished hip sheen. It doesn’t remind me of the reliable, well designed workhorses of the consumer Logitech brand, I don’t think it will appeal to the gaming demographic, it possibly could fit UE with some new products. Sure it fits the Logi label which I guess will be releasing innovative products in new categories for Logitech.

I would have expected the overall Logitech logo to represent the company’s core. A company who’s been making quality products for a long time in a difficult market and is still at the leading edge. I would have expected a logo in line with the design language of the Master MX. Badass, clean, forward thinking and confident. Something that all the Logitech family could stand behind.

Just being a bit fussy here – the kerning between the ‘g’ and the ‘i’ needs tweaking. Too tight. The new FaceBook logo has the same problem. It seems that kerning is becoming a lost/ignored art.

Just being a bit fussy here – the kerning between the ‘g’ and the ‘i’ needs tweaking. Too tight. The new FaceBook logo has the same problem. It seems that kerning is becoming a lost/ignored art.

It is just a touch snug isn’t it?

At any rate, I find the look to be a little garish. Then the video seemed a little underproduced with a neo-80’s hipster feel, but then the people in the video were the standard “all ages and races”. Typical marketing “we want to appeal to everyone but want to look bold & edgy at the same time” look. For a brand like Logitech I suppose it will work well enough.

The rebrand was done by DesignStudio in London. You know there work from their recent work with Airbnb. 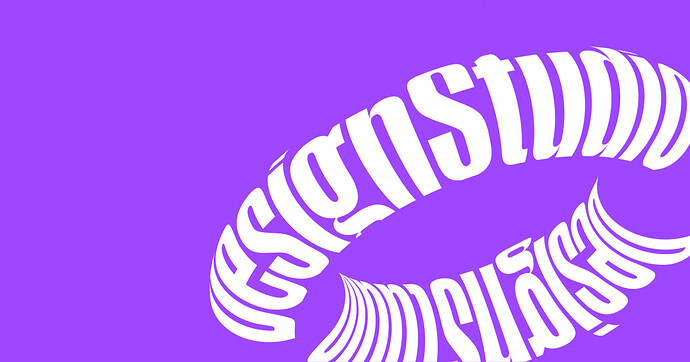 I have been working with the new logo and brand guidelines now for months, applying it to everything from presentations to products and I have to say that it is growing on me significantly.
That we got rid of the hand/eye thingy is such a relief.

I think what needs to be understood is that Logitech isn’t just putting a splash of fresh paint onto their some old biz-as-usual peripherals.
This launch is the start to a whole new philosophy for the company, a vision that was sold to me when I was hired back in February and which I am excited to see come to fruition now.
Since I am part of this reorientation of the brand, I am of course biased but I am very excited for this company with a strong legacy in engineering to turn around, leverage that experience and combine it with a fresh, new take on CE, with an emphasis on design.

What has been shown here is just the start and I believe that all of this will make more sense once more and more products hit the market that just wouldn’t have worked under the old umbrella.
UE is a good example for very well executed brand stategy and I am confident that Logitech will follow suit.

I am also not sure I follow the naming strategy, I am already confused by the G + UE + Plain Vanilla Logitech, now there will be logi as a side brand as well ?, or will logi replace UE,G and plain Logitech ?

So G (gaming) and UltimateEars (UE) are very strong within their demographic, with very specific marketing plans. To keep these branches separate makes a lot of sense to me.
What this rebrand with logi is attempting, is to get away from the “plain old vanilla” and make this branch of the company as exciting and fresh as the other two.

It baffles me a little that people are so bewildered by how to pronounce “logi”. If you have ever said “Logitech” in your life, you have pronounced it correctly already. Just skip the “tech” next time.
…or maybe another way to put it, the “tech” is silent

When Darrell arrived, he was stunned by Logitech’s lack of a design ethos. He’d come from Braun, where he met frequently with Dieter Rams, the German visionary who pioneered the idea of a design-driven company. Like Braun, Logitech had great engineering. But it had no designers. It’s products were wonderful to use, but meh to behold.

Interesting… I always thought Logitechs products were quite well designed. I doubt the VX and MX mice were done without designers. I know for sure I had those products before Darrel joined 2012.
And he frequently met with Rams at Braun? How old is this guy? Rams resigned Braun in 95. According to Darrells LinkedIn profile he was a Brand Manger at P&G 91-97… Braun is indeed a part of P&G… since 2005. So yeah… sounds like a bunch of BS.

The branding is… OK but forgettable. Google+Mircrosoft in a blender.
The brand does seem younger, which may be good for future business, I don’t know. For me personally Logitech stood for best-in-class peripherals, not lifestyle BS. It seems like there is a gap in the computer peripherals market - value-for-money stuff that would fit with Muji styling.

I agree thought that it is an improvement from the old logo. That was way dated.

If you have ever said “Logitech” in your life, you have pronounced it correctly already.

What if you haven’t?

Interesting… I always thought Logitechs products were quite well designed. I doubt the VX and MX mice were done without designers. I know for sure I had those products before Darrel joined 2012.

What is being alluded to here is that before Darrell arrived, Logitech had no inhouse design department. Everything was being handled by external design agencies. Hence he hired Alastair Curtis from Nokia as CDO.

While “meh to look at” is a matter of opinion (I tend to agree though), it is true that it is very hard to build a cohesive design language and legacy while working with a large and every changing group of agencies.
Braun has proven how a strong inhouse vision and team can achieve this and my guess is that this is what Darrell took away from his time there.

What if you haven’t?

Well then this is a problem not unique to Logitech and the introduction of logi.
If you have never said or heard anyone say Coca Cola, Lufthansa, Gucci or Lamborghini, I am pretty sure you’ll have a hard time nailing it at your first go.
Logi is obviously build on the brand cache of Logitech and I’d be surprised if people will actually be thrown by the missing “tech”…

Definitely it will be pronounced LOW-GEE. Isn’t that some guy from Thor?

It brings to mind other shortened names like FedEx, Coke, KFC …

For reference, the reliably balanced, entertaining and qualified Armin Witt from BrandNew has weighed in and in my opinion, it’s the best review yet.

New Logo and Identity for Logitech by DesignStudio

I think this was much needed. The old logo (the weird eye thing was designed by frog in the 90’s I think) needed to go and dropping the Tech from the name I think is the right long term decision. This allows the brand to be younger and more fun, which it really needed. I think the pure geometry of the logo is going to allow it to work on fun and inexpensive products as well as higher end, and the much shorter logo is much better for on product use.

Having gone through this myself with Polk and Definitive, you can never please everybody. The most important thing is to stick with it and see it through. The tough part for companies with huge product portfolios is the transition period. 2+ years in and we are still reving product. And you think it is just switching a logo on the product but it’s the packaging, the manual, the warrantee card, the registration form…

I like the now look, though it is a bit microsoft-y but that makes sense with the new CDO. To me the old logo really looked dated and the new one is a fresh start to target a younger generation, though will that cannibalize any of the UE demographic? I think with the design of the keyboard in the video, which I know is older and not done in house, and the new X100 speaker (not sure if that was in house or a design firm) the logo works well. It’ll be fun to see the new range of products as they start being rolled out. 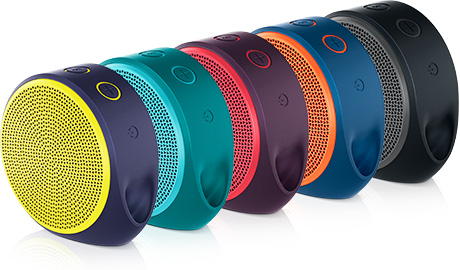 Way overdue and overall quite a revolution (not evolution).
That video nearly gave me an epileptic fit. Is that the look of the non-computer computer peripheral company?
I can’t un-see that kerning bit now.
The color palette composed exclusively of secondary/slightly bleached or desaturated tones is a little confusing. What’s the main color that I associate with the company? And if its based on ‘clothing of today’ what will they do next year?
We had to go through something similar when we dropped the ‘USA’ from our company name. It made a bunch of people unhappy, but seemed to make a difference when selling into EMEA and Asia. And yes, six years on we are still washing out the old logo and colors.
I have always thought Logitech’s aesthetic design to be quite good. Portfolio-wide it was kind of a mixed bag. Perhaps the refresh might serve as a good time to cull some of the older/weirder stuff.