I am working on my own little project related to small power supply unit for smatphones. My idea is to make power supply unit capable of holding/storing the disassembled cable when product is not used plus extanding default funcionality of ilumination made by transparent part. 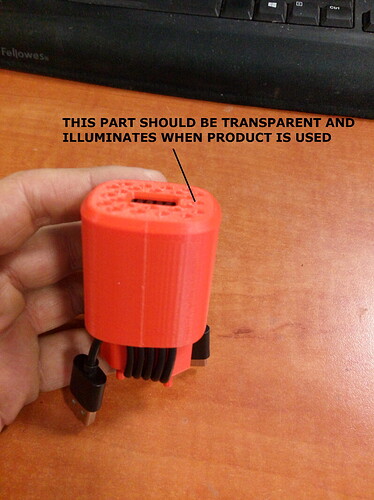 Does anyone of you has experiance in development of such parts? Is there any software I can use to analise light distribution in transparent part?

In my experience this has always required prototyping. We just finished a project that had an LED edge lit effect with several LEDs hidden around the perimeter of a translucent part with some laser etched details to dissipate light. The only way that we found to get it to work was to make several prototypes. The clear part is compound curved so we first tested it with flat parts. Then we laser etched and drape formed a test part to try out LED placements, then made a full prototype.

If anyone else has a better way, I’d love to know too!

There is optical analysis software that can do complex raytracing and calculate this, but we’ve always had an optical engineer who spent most of their days designing lenses for that level of complexity.

It’s hard to tell the desired effect and complexity from the photo you posted, but in general good light dispersion requires - the right LED (with a cone that matches the intended illumination area), the right plastic to either diffuse the light (we used a lot of Lexan FXD materials for light pipes since they could be milky to diffuse light better), and the right distance from the PCB for the cone to spread to hit the intended area.

The easiest way to get a rough estimate of this working is to find the cone of your LED (ex 60 degrees) and model it into your CAD model so it’s shining out of the LED. If the LED is shining straight towards the surface that will be fairly easy. You want the positioning of the LEDs to be enough where you have a slight overlap of each cone (since there is falloff from the center to the outside of the cone).

If you can get the LEDs laid out on the board where they all consistently intersect with the surface you want to light up, then you likely don’t need any “pipe” features at all. If the LEDs are at an angle or awkward position, then you would have to look at actually building a pipe to try and route the light up which is a bit more complex.

I’ve done experiments using Keyshot raytracings to try and simulate some of the effects, but generally the renderings take forever and are still only so accurate. Once you have a rough idea, then you can move to a 3D printed part (it may need to be hand polished) or a cast urethane part.

If you want a better idea of the approach to use and can share a cross section of where your PCB is and where you want to illuminate its sometimes easier to sketch.

Here are some links I found via Core77 a while back. 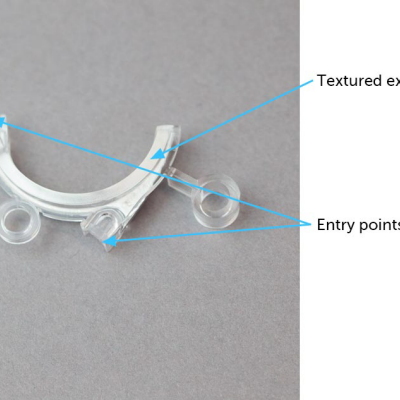 Learn by Example: How to Design Light Pipes - Core77

Light plays an important role in the design of many hardware products. Often, they are both decorative and functional. Indicator lights are the most minimal user interface: They tell you whether the device is turned on, low on battery, or "thinking"... 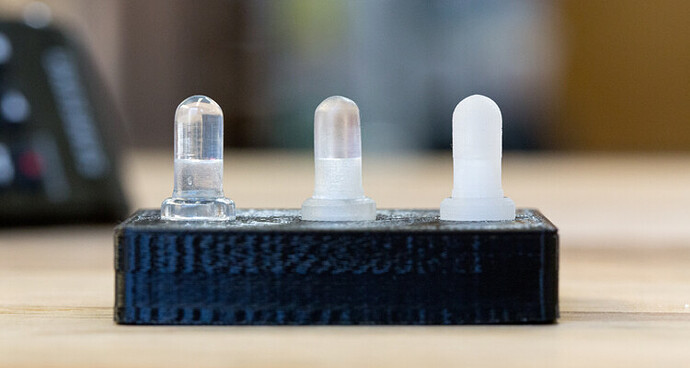 thank you guys for all comments 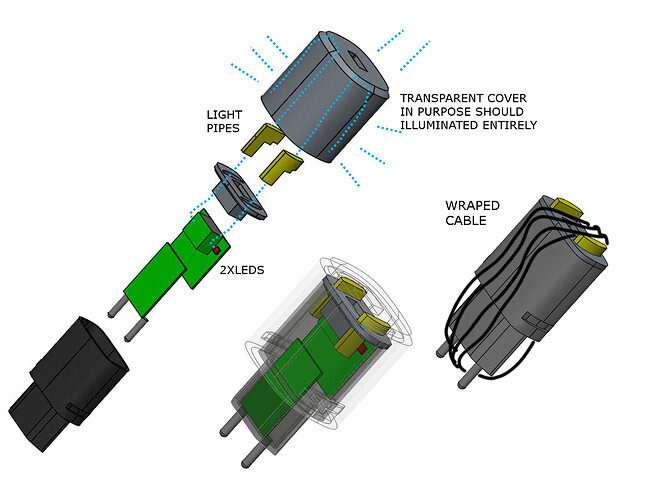 Cover is desired to be transparent and illuminate entirely, plus assembly adn disassembly must be as easy and accurate as possible.

More I think and read about light distribution, more I doubt in my idea, especially in illuminating the cover entirely and homogeneously.

Based on your CAD mock up, the light pipe you’ve proposed won’t work. If you really want to get into the details of light pipe design, this design guide covers pretty much everything you would want to know. http://www-eng.lbl.gov/~shuman/XENON/REFERENCES&OTHER_MISC/Lightpipe%20design.pdf

If I was attempting to light the entire outside of the translucent part, I’d start with LEDs on both sides of the board, with light pipes to get additional light to the sides and top of the part. I would also want to heavily texture the part to help eliminate hot spotting, but you’ll probably be stuck with that regardless.

This CAD screenshot shows a something I worked on a little similar to what you’re trying to accomplish. The part was molded out of a milky white material that helped with diffusion of the light.

Agreed that trying to evenly light an area that large especially if it’s just a cover will be challenging (not impossible, but challenging!)

If the main housing is opaque, that type of light pipe would just give you some soft illumination on the top surface at best.

My suggestion would be to design a more local lightpipe area that would still meet your need, and creating that outside housing as 2 pieces or a two shot part (opaque over clear). As mentioned, creating a smooth uniform glow with limited LED space, a small number of LED’s and light across surfaces in 5+ directions is very challenging. Especially if your internal housing remains black, since that prevents the light from bleeding out to the housing.

From the scale of your exploded diagram it looks like you have less than 1cm for your LED’s to illuminate, which means the spread of those LED’s will only form a lit area that is very narrow. Typical tricks would be to try to move it as far away as possible, and pipe it towards the top, but the board means half your LED cone would be cut off by the PCB itself.

You may be better off shooting those LED’s to the sides, and illuminating the edge of the product. 4 LED’s (two on upper and two on lower area of PCB) would give you a better distribution along the side, and you may be able to design some pipe features into the outer housing itself to better disperse the light.

thank you guys for comments and support

it seems my prelimenary assumptions regarding illuminating evenly the outside cover are fake. More I think about it, more I doubt to make it simple and low cost. So I reconsidered the idea of this power supply.

Agreed that trying to evenly light an area that large especially if it’s just a cover will be challenging (not impossible, but challenging!)

If the main housing is opaque, that type of light pipe would just give you some soft illumination on the top surface at best.

Mike, I agree. I decided to minimize the lighting area to small part placed at the top of external cover. 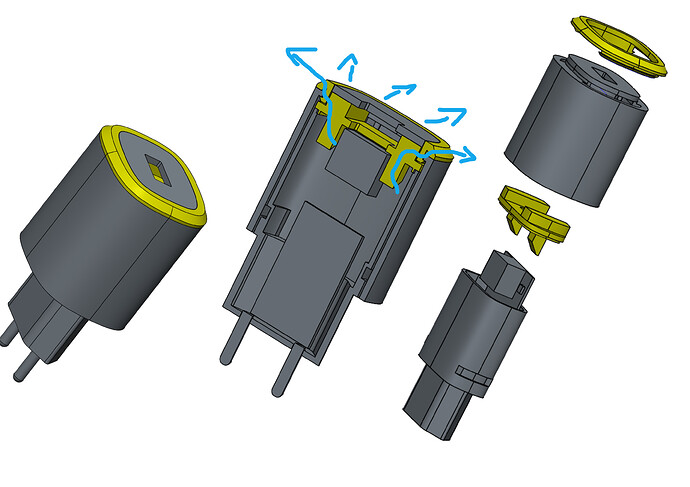 Based on what you’ve shown you will likely end up with a result that looks more like this: 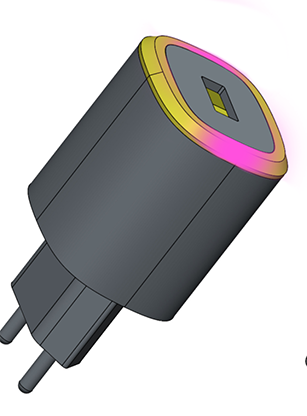 A few things:
-Because you have a pipe, plus the outside lens, you will lose a lot of light in the gap. Most lightpipes rely on total internal reflection, to keep light bouncing around inside the material to improve the uniformity. You will lose that phenomenon and the outer lens would only be good for basic diffusion.
-Since the outer lens will just be a diffuser, try to minimize or keep any mounting features uniform. The different thicknesses you have in place for the snap features will cause different light and dark spots and make it harder to make uniform.
-You’re probably at a point where if you are close to being able to prototype this with some 3D printed parts, you would learn a lot through trial and error. You can mock this up with 2 of your chosen LED’s very quickly.

You may decide once seeing where the light falls on the outside, to further refine the shape based on the areas that are light or dark. Or for this use case, partial or less than uniform lighting might still be totally OK.