Ok after a couple of days of worknig on this. I finally have soemthing decent. This is my first shoe render, I know my way around photoshop but this is the first time ive ever tried soemthing lie kthis. I know my shading is a bit off but I stopped trying to fix it becuase it just got worse as I tried. There are a couple of extra stuff I needed to add to the linework. A few extra detials on the puma form and pn the back heel. I plan to add soemtype of graffiti style effect.

Hey good work man! Looks like you’re starting to get the proportions down, which is half the battle…I’d try experimenting with things to set this apart from other Pumas for the next version. I think some details (graffiti sounds cool) would really help push this shoe.

So why is the shoe so angular?

Check out this pic of a typical puma: it’s all rounded… 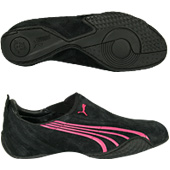 I would advise you to get the linework down in sketch form before you go to the computer.

I see what your talknig about, half is the fact that that was the first time I used illustrator and on the heal that point is were I joined to lines so the curves were off; and the other half is the way I drew the shoe it wasnt as curved. I couldnt go back and edit the linework because all I have on my computer at home is the actual picture file. The .psd is on my school computer. But I was able to edit it a bit and add the detials I wanted.

^^ agreed. Work on your sketch and and design first before going to PS for rendering.

The most important thing in any design (not only footwear) is that the design is solid. A rendering is only a method of communication, but if the design isnt there you arent communicating much.

I would explore a more unique style/detail in your concept. Also work out some more about the outsole and construction to get a better idea of what makes your design unique.

overall, your proportions are pretty good, so thats a good start for a base on a nice design…

I understand, I just drew up the show rather quickly So that I could have soemthing to render. This was more of an exercise to practice Illustrator/PS. I uplaoded my outsole in my post above. I originally wanted the puma form to wrap all around the bottom of the shoe. However It came off a bit diffrent than expected.

nice first attempt, but conside these points, why ‘PUMA’ do you think the design pitomises the Puma DNA? If so how? Also look at existing models and try to mimic the silhoette, I ve said this before on the forums dood , never be ashamed to use an exisiting model as an underlay so less time i sspent pinning down proportions and more time can be spent on the details and the character of the product. I wouldnt worry about getting your render down, but more importantly as MD and Rich have already said egt your sketch down first and then look at doing the fancy ish later. Drive the design more too, don t wory about limitations at this stage try to think more outside the box, what differentiates this product from say an Adidas or nike or … any other competitor on the same shelf.
Good luck, if you need any tips for illustrator PS, check out the tutorials on the other forum on Core.