Anyone who has been through design school knows how helpful it was to have teachers willing to pull out a pen and piece of paper and overlay a sketch in class. It’s probably the most effective and direct way to give feedback and it gives some insight into how others might approach the same problem.

So if you have a sketch that you’re struggling with, or just want a fresh perspective from someone else post it up; and then anyone can hop on and do an overlay to give feedback.
Couple Rules for submission:

Couple Rules for doing an overlay:

So to get the thread started, we have some examples, thanks to apowers and moch20 for kindly allowing Mike and I to overlay their work.

Here are Mike’s thoughts pulled out from Aaron’s thread:

I added this golf ball inspired texture that could be neat. Supposedly that texture reduces drag, and could be a cool way to really show there is no front window. I also tried to make the forms of the lower half respond to the greenhouse. I made the wheel openings softer and less symmetrical then made all of the details like the headlights and tail lights respond to the single spoke wheel detail. 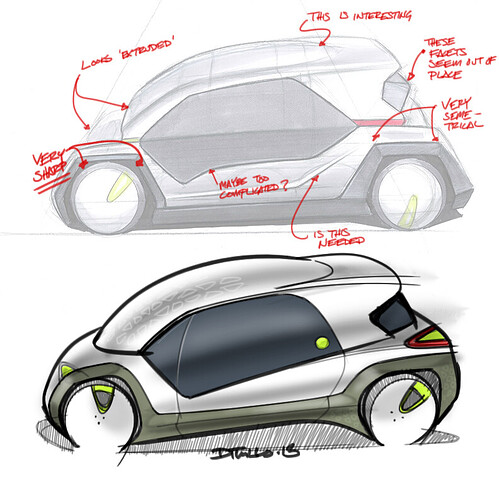 ditullo overlay.jpg792×792 128 KB
For my overlay of Moch20’s work I mainly focused on dialing in the proportions ( I went with a tennis trainer ) and trying to get the elements of the shoe flow more cohesively. I tried to accomplish this by extending the main lines established in the original sketch and looking for opportunities to align elements so that everything looks more intentional. 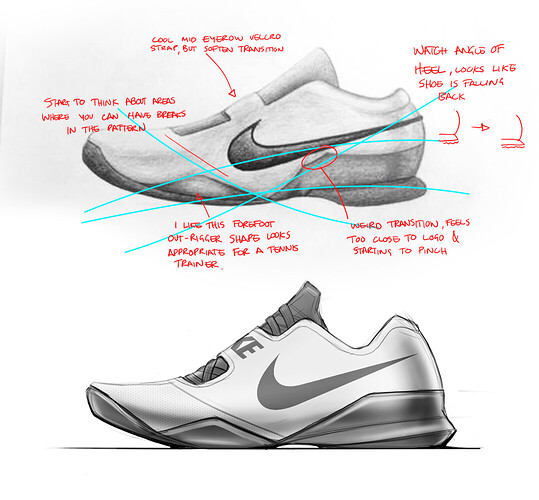 sketch over.jpg1078×1000 178 KB
So feel free to post up a sketch that you want overlaid. Or overlay one of the sketches Mike and I did, I think it would be great to get multiple overlays of the same sketch to see how people approach it differently.

Looks good! Thanks for the feedback! I’ll will keep all of that into consideration.

Just sketched out a bike light for fun, would like input on shading, the way i did it I feel makes it look pretty flat. All other input is welcome as well! 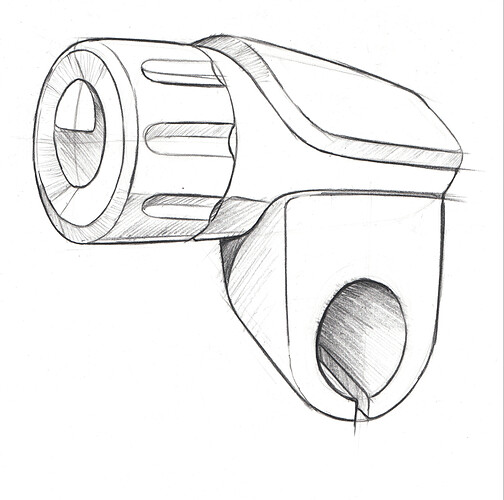 Had a quick go at it, definitely still lots to learn in Sketchbook Pro but it was fun to do! Spent an hour and a bit on it. 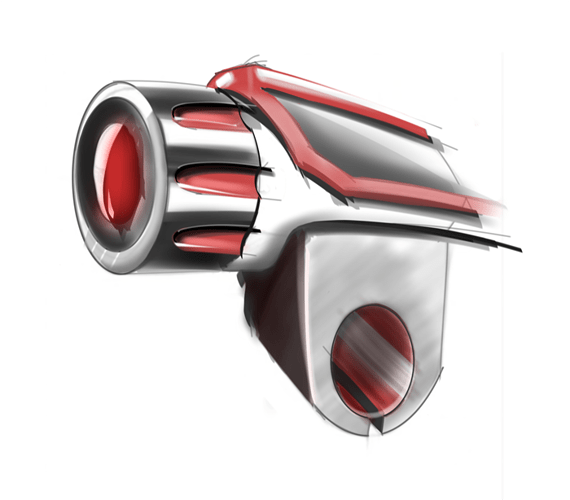 Nice skoshbox! I like the loose, energetic feel to your overlay, I tend to overwork my sketches/renders a lot. I think the red might be distracting, and the form is getting a little lost, I’d like to see a monochromatic version.

Here’s my overlay of Traftos’ sketch. I think the perspective was a little extreme in the original sketch, so I focused on trying to get the perspective dialed in, and tried to render in a way that revealed the form. Looking at it now, I kind of want to overlay it again and restart, haha

I think I ended up with something a little lumpy and brick-like, whereas Traftos’ original direction was a little more sleek.

Also I’m not too happy with the transition area where the main body intersects with the bracket, might take another whack at it later this week.

Would love to see a couple other people take a stab at it. 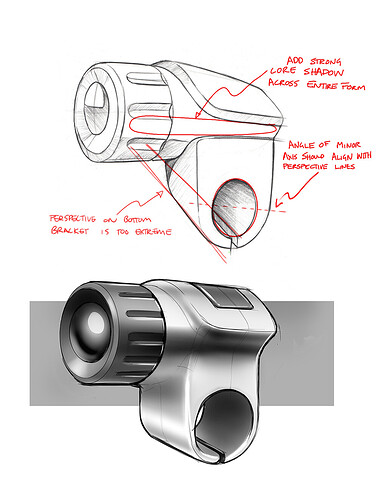 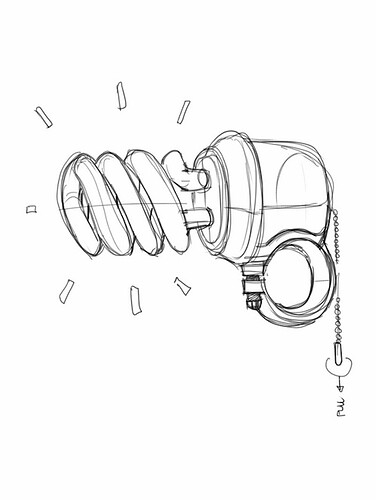 Fun sketch! Like the loose style. Nice to see how you’d approach it.

Lots of good points: the core, perspective, etc. I like what you did with the lens too. Looks great. EDIT: I think you critique yourself a bit harshly too!

Thanks a lot to both of you for taking the time to do that! Much appreciated.

Heres an attempt. I probably should have used ellipse guides, but its close enough. One habit people should try to do is to “draw through” and construct the drawing. That way, you can be sure the perspective is correct. Centerlines help with this process too. 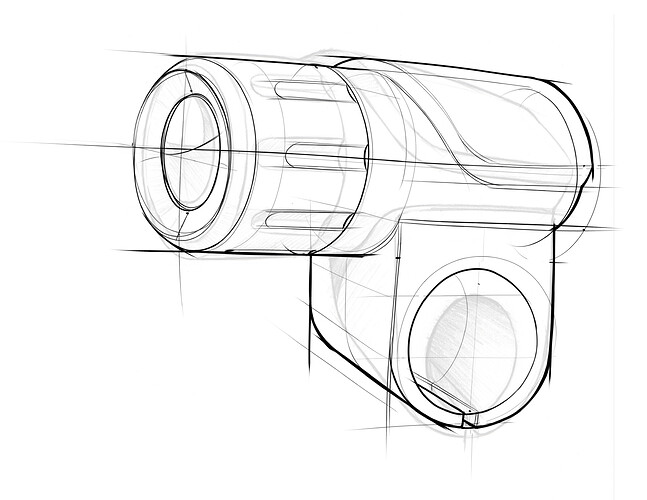 Wow, super interesting to see how everyone has a different take on the same drawing!

Nice skoshbox! I like the loose, energetic feel to your overlay, I tend to overwork my sketches/renders a lot. I think the red might be distracting, and the form is getting a little lost, I’d like to see a monochromatic version.

The few attempts I have done were very sterile in the past so I was quite excited to hear you say it looks loose and energetic. I also agree with the form getting lost, maybe I’ll do another attempt later this week.

And nice interpretation of it Yo, it’s interesting to see how people [designers] who really understand the technology/market for a product are able to change things up rather than just take it at face value like I did, very neat.

You double as a keychain mounted adult toy. BOOM. Post a sketch.

Finals week for my concept… Lets see what you guys can come up with! Feel free to design towards my objective in my personal thread or to however you’d like!

Apowers, can you gives us a refresher on the objective here? Love your sketch thread, but its a lot to go through.

Edit
Found it! For everyone else:

Our major project in Transportation 1 is to choose a brand (I heavily persuaded my group to go with Hyundai) and either redesign or create a new line within the brand for the year 2021. The car’s price range is $15-25k, and the goal is to have an accurate tape drawing, and be able to draw the car in multiple views in the correct proportions.

Oops! Sorry, I was in a bit of a rush, didn’t mean to make it a task to find it!

It’s an autonomous MPV, The rear has open storage, rearfacing passengers in the front. The silver section of the sketch is an extruded clam-like section to ‘protect’ the passengers, and it’s in-hub motors so no worries of trying to fit a powertrain in the front. The bright green graphic on the side is a body side turn signal, and the green sections on my poorly drawing wheels are motion sensors.

And as far as the surface intersection in top view Michael’s overlay is a good representation.

Tried to organize some forms and threw some quick color. This might be an interesting one to put into perspective! 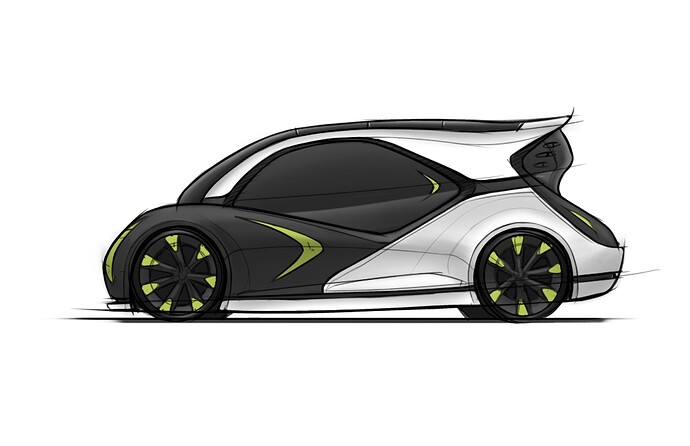 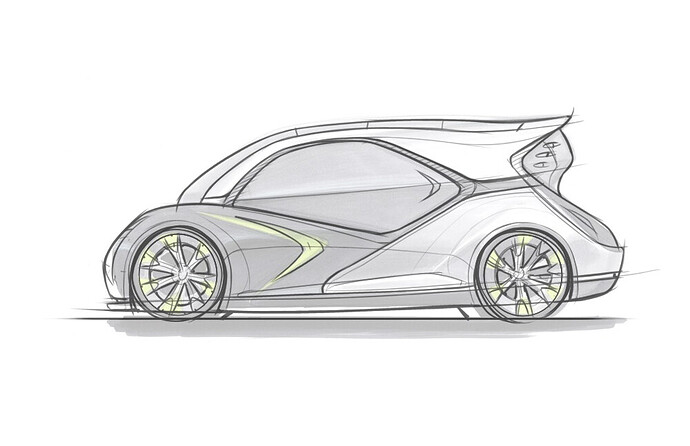