Hello all,
After reading this post on the front page, it got me thinking about the sculptural aspects of ID. I’d like to learn more about this type of surfacing, the interplay between lines, creases, etc.

Does anyone have any resources for learning this kind of thing? Doing speedforms and the like? Obviously I’m not trying to teach myself to be a transportation designer, but I feel like I have a pretty good grip on 3d fundamentals and I’d like to push myself further in this area (in a more formal way than casting up some plaster blocks in the garage and just going for it.)

Not sure if this will help, but there are few tutorials on going about surfacing a car in Solidworks. Never seen them but they might give some insight into the reasoning behind the surface construction.

This also has a 200+ page PDF with commentary on why he chose to construct the surfaces his way. Very good information here. 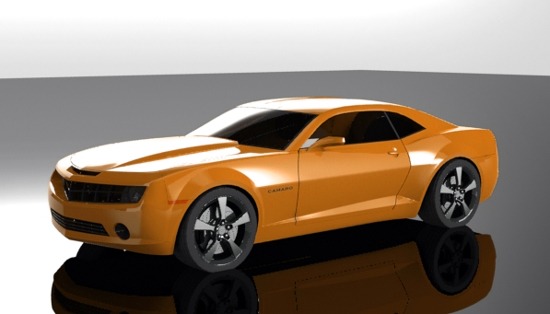 You see that hot looking Camaro up above? That's a thousand features of SolidWorks surfacing coolness you're about to create. There's an even cooler aspect to t

If you want to learn to play with form - but not for any type of real world manufacturing constraints, would be to learn a Sub-D modeller like Maya, Modo, T-Splines, etc.

Sub D’s let you play with form really quickly, without worrying about the complex and sometimes awkward handling of actual NURBS surfaces.

You could always take that Pratt class talked about in the article. I’ve taken two different courses from it, once by Linda Celentano and once by the now departed Leonard Bachich. Both times, it was really wonderful and changed my whole perspective on form.

If you’re into theory, the book is Elements of Design by Rowena Reed Costellow.

But you really need to hear these teachers talk, in my opinion. It’s like nothing you’ve ever listened to before, and I’ve not heard anything like it since either.

(Regarding the car itself, I have a difficult time appreciating the shit eating grin of the front face. Also, the rear, though nice, doesn’t relate to anything else in the car, and I just can’t stand things like that. Though some individual details are nice, on the whole I think it would have gotten a pretty low score if presented at the Pratt 3D department.)

Oh, a second tip: For the love of god DO NOT GO FOR SOLIDWORKS! I use it, but to model anything automotive in it would be like trying to eat soup with a fork. The right tool for the job would be Alias Automotive. Although, that’s a spoon with a very uncomfortable handle, it’s still a spoon. (I use both extensively, by the way.)

Spend some time dragging bondo or sculpting with clay with guys who do it for a living. I had an opportunity to do this and it increased my sensitivity to surface creation and improved how i sculpted in 3D.

Thanks for the responses! I’m really interested in the formal/theory aspect of surfacing over the technical- I’m very comfortable in Rhino, and I can get around in T-Splines. Definitely planning on getting into modo for some proper sub-d action, but I think I’d like to keep it physical for this exercise. Although the speed (and symmetry) of Modo/T-Splines is tempting…

Unfortunately taking the class at Pratt isn’t an option right now, and I don’t know anyone nearby with a transportation background. Eobet- I’ll check out that book, but you’ve confirmed my suspicion that most of this knowledge hasn’t been formalized on paper yet.

I’ve found a couple nice writeups of doing speedforms with auto clay, I think I’ll give that a shot and maybe use the mirror trick for symmetry.

you might also do some research on A-Class surfacing and consider pushing Alias G2 workshop. Someone already mentioned the Sub’D efforts. Clay seams best.

I’ve found a couple nice writeups of doing speedforms with auto clay, I think I’ll give that a shot and maybe use the mirror trick for symmetry.

Clay is the best, I personally avoid the mirror trick for two reasons, hard to work over the center-line in an intuitive way when just modeling in half. When working in full model mode, you are simultaneously developing two variations in each side, that is a big advantage to evolving a form. Take a photo and Photoshop it symmetric for a perfect form view of each variation. What is revealed is always enlightening.

I’ve made four clay models during my time at school and it really has helped me learn surfacing, form and how learning how light interacts an object. CAD modeling helps, but its not as tangible as something you could actually touch. Its really hard to judge proper proportion in CAD.

Clay modeling is a great tool in the way that you can easily and remove material to create the shape that you want. With foam and bondo, its much more difficult and slower.