Laptops with stickers on them..Unprofessional?

You’ve seen them at schools, cafes, maybe you have them. Are they unprofessional? Would you assume a designer to be “young” if they had a decorated laptop?

Would you take them less seriously?

It depends on the situation. If you are consulting or freelancing then an assemblage of stickers is probably not appropriate (unless your personal brand is defined by such a thing and that is how you actively choose to market yourself). If you have decorated your laptop with a tasteful large-format design that would probably be fine. On the other side of things, if you company has a culture that involves stickers, then go for it. I found stickers to be normal and expected in the bike industry (as were t-shirts, sandals, and office kegerators).

The latest Apple laptop ad with the montage of lid graphics could certainly be accomplished with custom vinyl stickers. If it sells your brand, why not.

I’ve seen the full spectrum in professional practice. I’ve never seen the need myself. To me a nice laptop sleeve or bag is enough personalization. It certainly denotes a less mature/younger vibe in my opinion. Tribal indicators matter to some people more than others.

On a similar note I hired a designer that had a ton of stickers on his car. Totally fine, he was a early 20 something. However, one sticker was a large brand mark of a competitor. On his first day I let him know he should probably take that off. It was a bad idea to be promoting a competitor’s brand in our parking lot. I can only imagine what our CEO would have said.

Do the stickers that come on a PC count? Like the ones with “Intel” and “Windows” logos? I think it depends. If a sticker denotes say the company the laptop’s user works for, I don’t think it’s a bad thing but your personal preference stickers I would assume to be a bit unprofessional yes.

Everything you chose to own and use says something about you. From your watch to shoes to computer to car to the pen you write with. While it may not be unprofessional, to me stickers would indicate someone that maybe isn’t as neat or probe to haphazard decisions. Stickers are non-permanent and very rarely carefully chosen. Mixed logos or whatever from different stickers shows a lack of desired cohesion in design or typography and likely little attention to detail.

Yes. I will judge you. But it probably tells me something truthful. I highly doubt the super organized OCD designer perfectionist will have a bunch of half peeling off stickers randomly stuck to their computer.

I’ve never had a problem with the Hello Kitty stickers on my laptop.

I highly doubt the super organized OCD designer perfectionist will have a bunch of half peeling off stickers randomly stuck to their computer.

Is there really a direct correlation between OCD organization in one’s personal life and appearance and design proficiency?

Two of the most talented designers (both over the age of 35) I have worked with had stickers plastered on their MacBook pros and one of their offices looked like a bomb went off in it, but he always had killer, rock solid work.

Your work should speak for itself, if stickers on your laptop are a deal breaker, then the deals probably breaking in your favor.

As a few people have said before, it all depends about your personal brand and the image you are wanting to get across.

When I was at uni, I had this on my Mac! The novelty wore off pretty quickly and after a few months I ripped it off. What I failed to realise when buying it, is that I would hardly see it. It’s the person sat opposite you who is going to see it most. And you can’t get a more in your face decal than this. Would I have taken this to client meetings? Probably not. 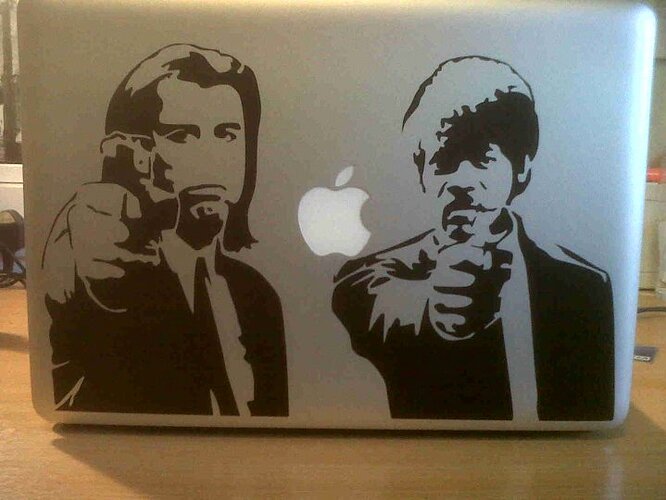 26921_377555073525_4548213_n.jpg720×540 55 KB
But I do think these black vinyl decals do have their place and can certainly add to your brand. Imagine having Dieter Rams’s iconic shaped glasses on your laptop. Similar to this below. It would be a really minimalist way of presenting your self and give your client or whoever you are meeting an indication of your design values. 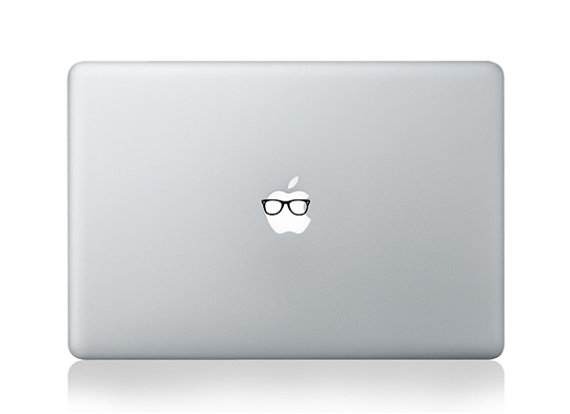 As for plastering your laptop with stickers you’ve collected over the years, like when you buy a t-shirt which comes with a set of stickers, I’m not really a fan of that. But each to their own.
_yo August 16, 2014, 1:38am #10

Had they ever had to walk into a potential client and pitch a $1mil+ project?

The eyeglass decal would work, the pulp fiction one probably not unless you were pitching Tarantino.

I do have this sticker on the back of my notebook though. It is if a dachshund and I have a dachshund so …

Choto, the work should speak for itself, but the world doesn’t work that way. Design everything, including your personal presentation to the world. Bring a client into a messy office? Never. When I bring retailers and partners into our studio for presentations and workshops I make sure every image on the walls is carefully curated to deliver the intended message. Everything is choreographed. I don’t see it as OCD as much as doing everything I can to ensure success for our team and get what we need out if the meeting.

Also, is the laptop your or the companies?

And if the work speaks for itself, why make your laptop visually shout a bunch a stickers? 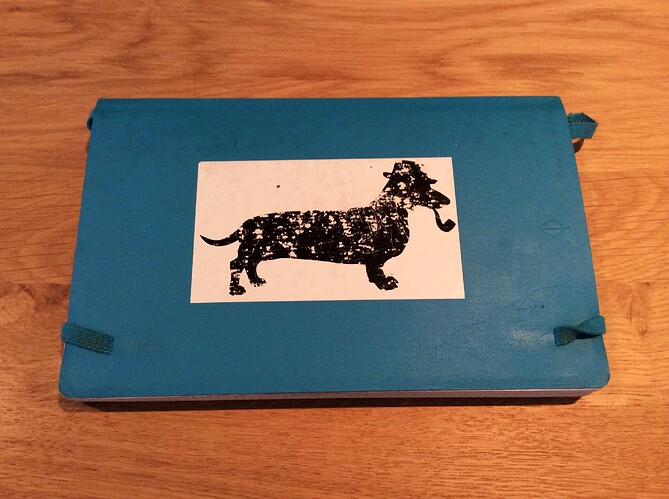 What about the “My other laptop is a Macbook Pro” bumper sticker on my Dell brick?

I don’t have any on my current MBP13 but had a large gray ‘underworld’ (electronic group) sticker on my original TiBook circa 2002. It matched the color of the titanium lid, was nearly the same height, and reflected my obsession with electronic music and DJs and clubs and all that, at the time.

I think there are a couple of rules and statements that if followed can be successful in adding some extra flair to an otherwise mass-produced piece of machinery. Stickers to me signify a little irreverence, a counterpoint to the prevailing notion that everything is perfect and must be kept perfect (and by perfect that means some other designer’s notion of perfect, even if its Jony Ive).

I think the fit of the sticker, the color and size, the location and placement, and above all the right level of clarity or obscurity of the message are all things to consider. Its an incredibly easy method of customization and signifying ‘ownership’. Customization can be done poorly or done well. Also, plunking a decal on what could easily cost a paycheck or two signifies a ‘casual’ relationship to money. This is best seen in Gumball 3000 vehicles. 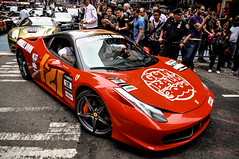 This is best seen in Gumball 3000 vehicles.

Case in point. If D-bag is the look you are going for…

This is best seen in Gumball 3000 vehicles.

Case in point. If D-bag is the look you are going for…

That didn’t really add much to the conversation. I was trying to illustrate a point.

I think my point was pretty clear. You have an example, I said what my perception of the person displaying said example would be. Point is that you will be judged by the tribe you choose to associate with and the stereotypes that go along it. You can pick and choose.

The bimmer with the n-ring sticker, custom plate and custom m logo I would probably judge similar. Some guy who thinks he’s a hot shot racer, probably had more money than sense, and not someone I would trust with subtlety.

I think my point was pretty clear. You have an example, I said what my perception of the person displaying said example would be. Point is that you will be judged by the tribe you choose to associate with and the stereotypes that go along it. You can pick and choose.

The bimmer with the n-ring sticker, custom plate and custom m logo I would probably judge similar. Some guy who thinks he’s a hot shot racer, probably had more money than sense, and not someone I would trust with subtlety.

My point was that applying a decal (cheap) to an object (expensive) portrays a somewhat disdainful relationship to money or materialism, the polar opposite of sneaker-worship for example (the sneaker heads who keep closetfuls of boxes of barely-worn shoes, maybe to re-sell, maybe just to have). The content matter of the decal or tribal association is secondary to the fact that a decal had be affixed to this “holy” object in the first place. Rather than reverence for a mass-produced object, the decal’s application owns it, or personalizes it, by slightly degrading the original object. This is not a bad thing, in my eyes. And I’d say the d-bag label is in the eye of the (non-d-bag) beholder.

I love the Hello Kitty stickers that incorporate the backlit Apple logo. 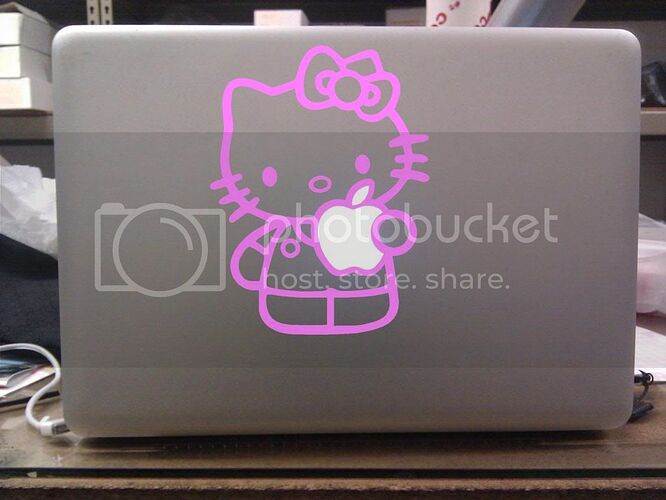 With most things in life, it’s rarely black & white so case by case depending on the setting, sticker, and all that should be taken into consideration. That being said, if you want to play it safe, best avoid it.