Why on earth would this be CNC cut, all the pieces are rectangles, easily cut with a saw. The design also seems very unrefined, it looks like little thought was given to aesthetics and details.

On the front page of Core no less…

I don’t get it either. “seeks to offer comfort” c’mon, really? You couldn’t angle the seat pan just a smidge? If this was presented in a Droog-ish, cobbled together junk kind of way, I could accept it, but as it stands, it just non-sensical on too many levels.

I was just about to ask the same thing only my post was going to be titiled
“La MDF chair - Seriously?”

One would hope that the CNC comment it is simply an error in the press release, that happens all the time. Regarding the design, it reminds me of the 20 min mockups we would make to test ergonomics in school, however those had curved seating surfaces… The design itself isn’t very inspired in my opinion- there’s nothing clever going on here. If as stated the goal was to build a simple planar based chair out of MDF using minimal materials and machining, I think the execution could be much more spare and intelligent in its use of elements. As is, it looks like parts were added as the design progressed to address structural insufficiencies. As always, I’ll hold final judgement on the chair until I sit in it and see it in person.

I believe in fashion, this is called “Derelique”

I thought I was missing something painfully obvious with this chair.

It’s MDF! who cares about this? its like saying you learned how to make the revolutionary new material… called IRON, its going to change the world.

I’m still thinking there is a hidden function that we’re not picking up on, like maybe it cures cancer, but the photos here just don’t show the secret red push button underneath

HAHAHA CNC milled and you make it look like it’s out of stock material. Wow…envelope pushing. I bet it’s not a typo. It’s just made by people who were too used to working with stock. I passed right by this when I checked in this morning. Thanks for pointing out the CNC part!

Design is very ordinary. I like the color though and the photography is very nice. Perhaps the hardware is interesting, but I can’t tell. shrugs It’s Belgian though, right? That’s cool.

From the original post:â€¦â€seeking to offer comfort with a minimum use of materials and machineryâ€. So is an upside down 5 gallon bucket. Wouldnâ€™t 20 minutes on a table saw be cheaper than a CNC machine? Perhaps a minimum amount of design effort is also the case here.

I agree with what has already been said. Of all the forms and complexity that CNC technology is capable of producing, this chair is so uninspiring.

At the risk of sounding like a grumpy old shop guy (perhaps I am), the La MDF chair also signifies a disturbing trend I see among design students who are unnecessarily captivated by CNC technology. â€œI just want to be able to click OKâ€ some have said to me. Why not CNC cut some of the joinery and eliminate the screws, which seem like an afterthought? If the end point of the La MDF chair is to showcase CNC technology the designer hasnâ€™t even scratched the surface of possibilities.

“I invented the piano key necktie!”

What do you guys think about some of their other “products” (renderings) suck as:
http://www.sixinch.be/site/#/1/3/31/
definitely not the most comfortable sofa in the world I’m sure.

Must have been a slow day at Core! The chair reminds me of a chair Michael Marriott designed in 1993, the XL1 Kit Chair (image attached) - although IMHO he did a much better job and there was some really good thought behind what he did. I would say the reason for machining is that it saves finishing as saws tend to leave cut marks where as CNC will give you a cleaner edge to go straight to painting. Its a poor effort. 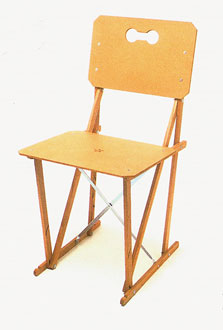 I think the chair would look way sweet injection molded out of meat. Now that would be different.

i loved the meatcards thing that was going around before. BUSINESS CARDS MADE FROM MEAT AND LASERS!

It’s a cube made out of stacked cardboard…

and it’s cut with lasers and diamond tipped saw blades…

then lightly finished with bondo and gracefully touched with automotive car paint.

if you’re curious… it’s red because red is awesome.

I want to keep the process and materials really simple.

made to order, limited edition, $5k each.

Maybe it started off with one of those conceptual ideas that some of my teachers push for that (IMO) in real life can easily fail (if the end result falls short) since the public isn’t willing to read paragraphs of the conceptual process for a simple chair.

Taylor, that was a great response.

It seems to me that unless you’re designing furniture for a particular space, or for a particular utility (task chair or office furniture, relaxing at home, vehicle furniture etc) then it comes down to style. I have never been a fan of stylised products (with the exception of “steampunk”) but I knida like some of the furniture from this website. I’m a big fan of conceptual “art-house” products too, but…

What’re your views on furniture design? What makes a particular piece relevant? It’d really help me out getting some views from you guys as I still would love to do some furniture based projects.

I never had a “had to try” for furniture design but at the same time I wouldn’t mind. So after taking my furniture design class I’m really glad I did. There is ALOT involved in designing a good furniture and definitely not just looks. In the end it all comes to the minute details I never would have realized that can make an ordinary design look great or a great design look ordinary.

That being said, I don’t think I’d end up going in that path professionally (but nothing against it neither), and have learned a lot in design in general (not just furniture) because of it. I definitely look at chairs differently now, alot of designs I really liked before I don’t care for anymore. And now seeing that a lot of the portfolios pieces I see frequently with CG sofas, chairs, etc just isn’t possible to make (or not good overall design because of ergonomics, etc). IMO designing a furniture in full scale is highly recommended to for all ID students, even if they’re not interested in furniture design as a career.

I agree with the negative sentiments about CNC gung-ho’ness. It was a real shame to see how few of my classmates actually spent time in the shop this year. I’m not sure which was worse, the students who made no models at all, or the students who jumped on the laser cutter/CNC/3d printer without ever entering the shop.

CNC’s can create a LOT of waste depending on what/how you’re cutting. And I’m not talking about cutoffs, but just (mostly) unusable sawdust. Wasteful.

Can we like, strap the designers down and make them explain a few things.

Its stuff like this (this being everything the company has done) that has turned me away from furniture (design). I studied it in school and I love the action and the energy but a lot of what is out there makes me want to die inside.
Ugh this is the most uninspired crap that looks like it was pooped out of a giant extruder. This crap looks like the junk you make after five minutes of solid works tutorials.