Never have done a kg entry…but decided to throw together some stuff for this month. I had fun with this and did a desert trail shoe. The concept was to do a very breathable and flexible shoe that still offers good protection. My direction came from various aspects of the desert. Ill post my image board as well. 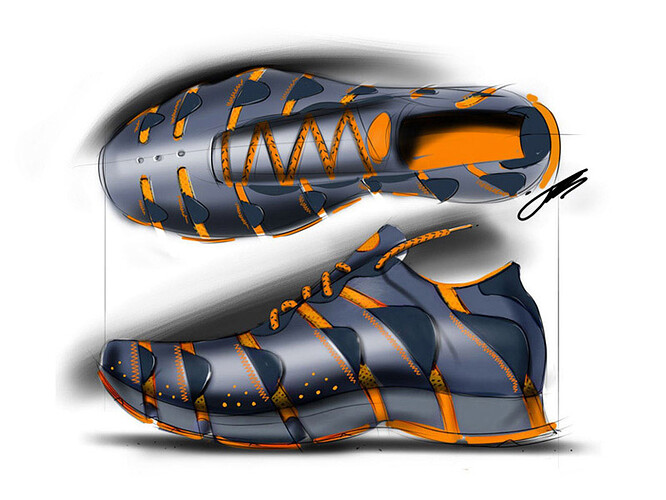 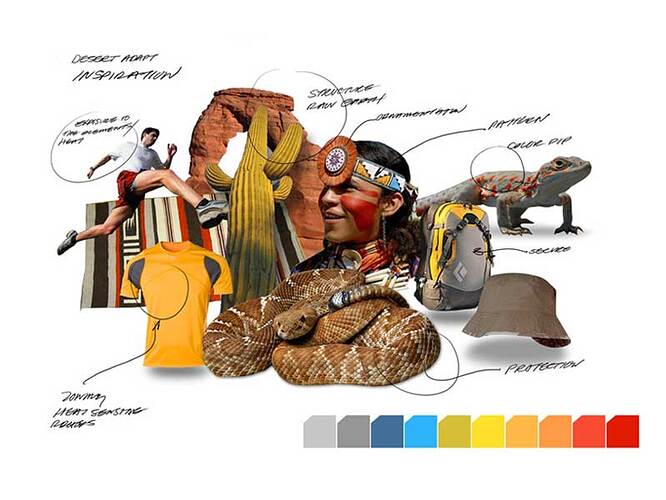 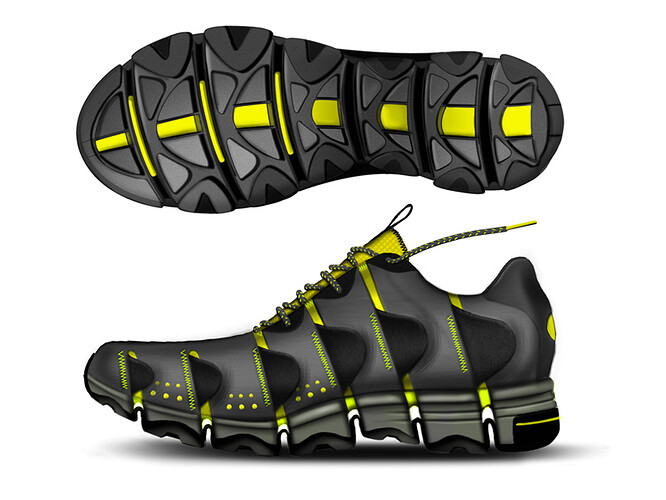 Thats a beauty.
I really like the sketch much better than the final render though.
I think your shape was more sporty, especially at the toe.
The mesh showing through the chop-outs is another nice detail in the sketch that is lost on the more polished version.
Also, the top view shows off the asymmetrical vamp, a very nice touch that would be totally missed without your having gone through the trouble of sketching that top view.
I like the idea of the midsole having the flex of the individual segments limited by the soleplate. I bet that would work.
What is the function of the extended flaps? Decorative? Perhaps to deflect debris?
Whatever the case, I imagine that they would ned to be somewhat stiff to keep from folding outwards and obscuring the silhouette of the shoe.

Good comments! I totally agree about the sketch vs. the rendering. I need to work on that. Yeah the flaps on the sides would offer protection as the vertical cuts leave the foot a little too exposed. I was thinking these could be a stiffer material which would also add support horizontally. I also imagine this being cool in motion as these scale-like pieces would be free to articulate like a snake or lizard.

JM! This is a really nice project, homie!!

I am loving the idea of the protective “scales”. I do agree with the sketch looking better, but the finished is nice as well. Would have liked to see some type of logo work (even if just a made up brand) just to see this come across even more as a polished product. It’s hot though and I love the inspiration and purpose. Very holistic design with the bottom plate reflecting some cues from your upper. Great work! You design for Adi, correct? Man, I really need to polish up my photoshop skills!

TH- thanks for your thoughts! Yeah, im at adidas right now as an intern. Was gonna brand this Salomon, maybe adidas…started thinking it would look good with a swoosh…hehe havent decided.

Didn’t you already submit this? It’s set up nicely for Adidas…but the swoosh always makes it look good

…nope haven’t submitted it before now.

the sketch is dopeness, the cleaned up joint lost all the punchy-ness of that the sketch had; it is a lil’ muddy with the colors. to be able to see the articulation of the “scales” would be sweet, what if you could do the whole upper like that? i think that would be a spot on solution!

The sketch is hot. I think this is a good example how subtle things can take something from good to great (or back the other way) the final does not capture the energy of the sketch. I would just enter the sketch, no need to put in a techpack in my opinion.

Bring that energy back, from the more upward, unbalanced arcs of the fins, to the faster, more forward leaning seams in the upper. Then bring that more iconic, directional design to the outsole… don’t tighten up too much!

Thanks for sharing it, super nice sketch.

Yes I agree with all. I think I lost some flavor of that sketch def when I went for the tighter version. One thing about going that tight tho is it makes you figure out ur design real quick…theres no getting away with things that you do in a “hot” concept sketch. I’m going to try an find a good balance, something that explains the design but also captures more of that speed and excitement. Thanks for your comments Yo, junglebrodda…

I think i’m a little late on this one. NICE WORK MAN!!! I love the sketches they have more power. A little bit of contrast on the final design will make it aggressive to.It’s definitely something new and fresh and you really captured your inspirations all the way.

thanks!..Here are some misc sketches from the process on that shoe. 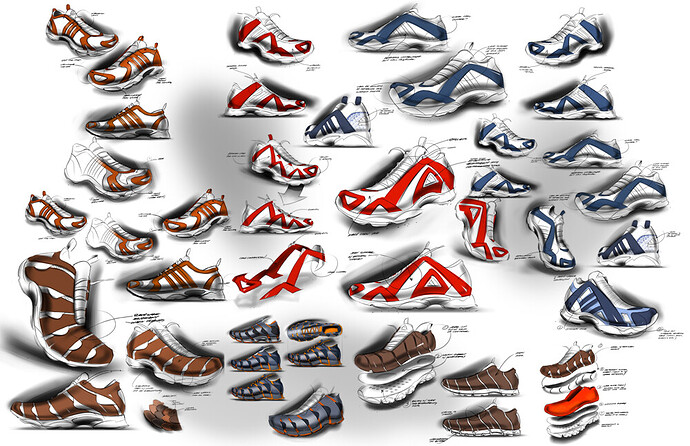 VERY nice! What do you do your line work with? Black colored pencil? That photoshop shading is distracting for me…I dunno…it bugs my eyes for some reason. Awesome exploration though. Loving the exploded view sketches!

all sketching was done digital…Sketchbook Pro.

Did you do these with at Intuos or a Cintiq? Excellent process of work!

Have I told you BYU kids recently how much I hate you and your drawing abilities?

These were a Cintiq…Cyberdemon! whats up man! thanks for the props…glad u like em.

These were a Cintiq…Cyberdemon! whats up man! thanks for the props…glad u like em.

i complimented your work on kg, but had not yet seen this exploration.

i just fell off my chair.

I think the design elements have been covered by the others, but amazing communication skills there dude. big props.