edit: For some reason I can’t get embedding youtube video to work - anyone who could reply and let me know how to do it? in the mean time, the video of the first design can be found here: clever kettle design - product tank - YouTube

This is a Kettle design I was playing around with for a long time. I was really tring to improve upon the existing kettle, something my Nan really struggles to use because of her weak wrists. However, after a lot of playing around, I realised I was asking the wrong questions as I shouldn’t have really been improving the kettle, but trying to find a better way of making a cup of tea or filling a pot with boiling water for cooking. I often think we spend too much time trying to improve what we already have, rather than asking different/better questions and starting from scratch - ground up re-design. In the end I discovered that for her, there will never be a perfect solution, because even if invented (The closest thing is the kitchen sink tap that constantly delivers boiling water) she wouldn’t be able to afford to have it fitted/wouldn’t want the disruption etc and it still wouldn’t solve the problem of then carrying heavy pans from the sink to the stove. I re-thought the design parameters and came up with a lightweight fillable vessel that she carried to a boiling unit that housed a long insulated filling hosepipe (electric pump powered) that would reach her stove, tea pot etc. I realise I’d have to be careful with the final design to avoid potential steam burns etc. 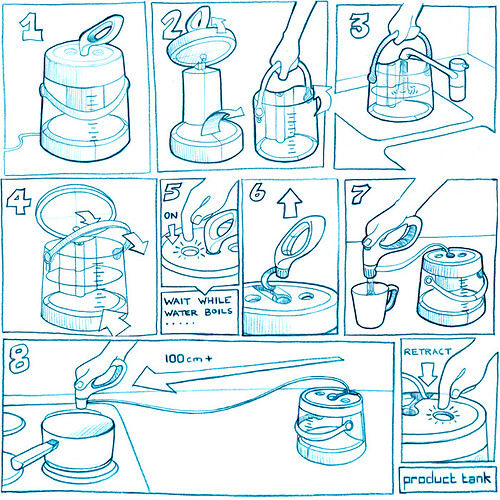 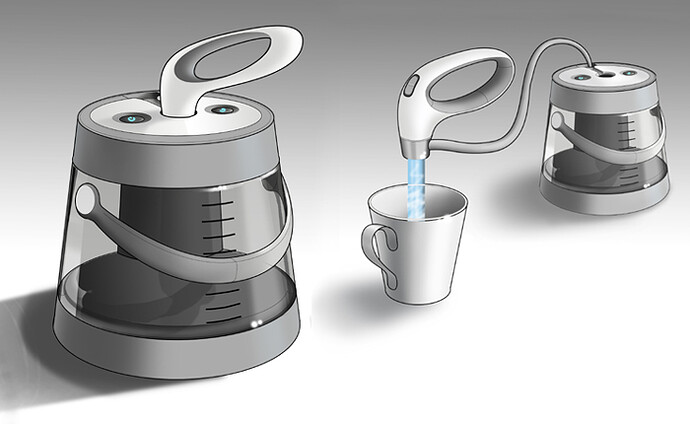 I like where you are going with it. this is getting to be more compelling to me. I like the seeds of thought in the last version as well, but this goes the next step.

So, here is a devil’s advocate question. If grandma has trouble lifting the big kettle, why not just make a very small kettle? Several small kettles could even nest together on a single burner to make enough tea for company? Simple, inexpensive, and an iconic format. Anything with tubes and electric pumps might be a bit intimidating, too much to learn.

… or, how about a smaller, stove top version of these air pump carafes that are frequently used for catering? Easy to use and understand with no electric parts. 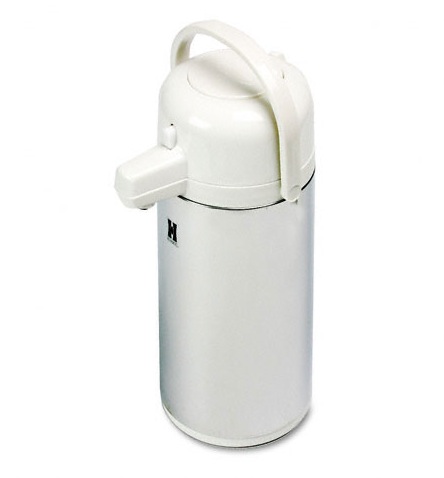 Yo, I love that idea about the kettles nestling together as it would solve so many problems, boil one for just her, two if a friends comming - 5 if the family is around etc. Plus it would be very energy efficient in use as you’d only ever be boiling the water you’d need. If each kettle was a little bigger than a cup then there would be a direct physical correlation to the amount of water you were boiling rather than guessing by judging the height of a ball or line etc up the side of the kettle. Or why not have each little kettle as the mug, so you could just drink directly from them. Can’t believe I didn’t consider it, too focused and couldn’t see the wood for the trees!

I’ve seen so many water boiling concepts where a spoon has enough energy to heat a cup of water as you stir it etc - but I’m striving for a ‘real world’ solution. Good old grandma has a very small light weight (hotel room) kettle now, but still fills a jug that she takes to the kettle, because its one of those old types that you have to push a plug into, rather than drop onto a base. Can’t seem to find her a very small kettle with a base docking system.

I think Yo has the right idea in limiting the amount of water needed, since the weight of water is really your limiting factor. No matter how light the vessel is, water is always going to be about 8lbs to the gallon. In your storyboard you solve the problem of moving the hot water, but not the original water in the tank.

On thing that came to mind was a type of water filter I had at my house as a kid. It was designed so you didn’t have to permanently install a large/costly system (like the kitchen hot water systems). Instead it just screwed on to the faucet and had a simple bypass valve to operate it. It was not very aesthetically pleasing but it worked well, and was cheap and easy to install. I just thought there might be some potential there. 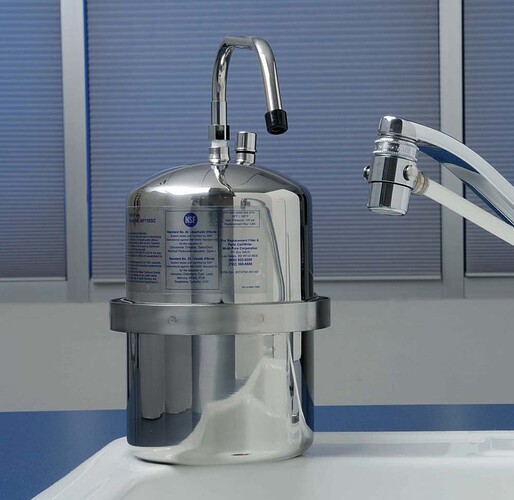 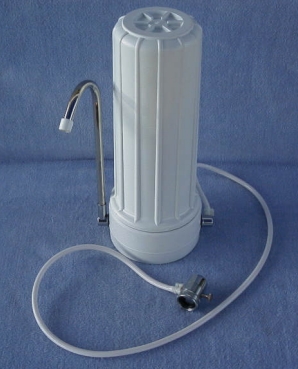 It’s no looker, but I can see how useful your suggestion would be. One of the problems with the small multiple kettle idea Yo and I were discussing is that whilst it would reduce weight, for my Gran it would also mean having to make multiple trips, which is a problem as she doesn’t walk well and uses one of those three wheeled walking trolleys to rest on. Currently her trolley doesn’t have a tray as she can make it narrower to get between furniture and so that it doesn’t take up a lot of space when not in use.

The water filter idea would solve the filling problem, and (with careful design) it should be possible to fill and pour through the same tube so the thing doesn’t end up looking like an Octopus. If I could get her to steam her vegetables, I’d then solve the problem of managing heavy pans full of boiling water. It’s a much better solution than what I started with.

I really like the video and appreciate your evolving point of view.

When looking at your latest idea and the Airpot Yo posted, I was reminded of this Cuisinart machine

The Kelly Kettle, an 19th century product, refreshed. Granted, this is a camping product, but I like the concept. A water boiling system, with cooking vessel accessories. And, you could probably power a small locomotive with it 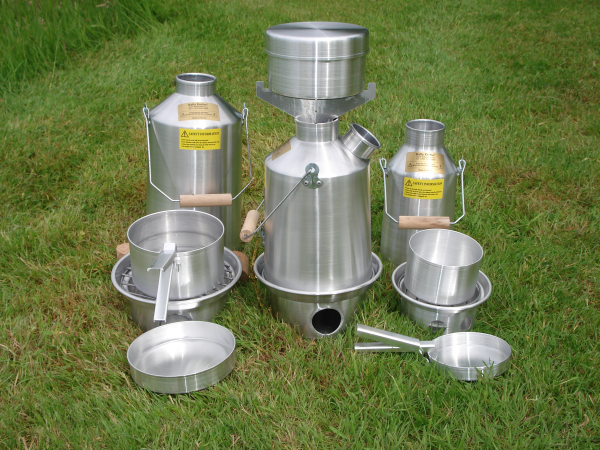 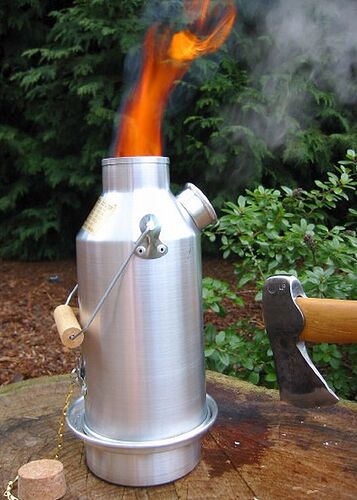 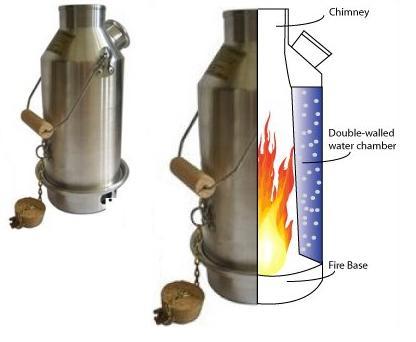 Yes i entirely agree with Yo on this and came to a similar conclusion when seeing this on Yanko a few weeks ago. It did rather inspire me to question the whole point of a kettle. I did enjoy your very functional aspect of this i.e solving the functionality of it rather than as you say heating a cup via a spoon. However, upon further inspection and study of user habits I too came to the conclusion that how often is a whole kettle actually boiled. . . The only instance I came across was work situations and when entertaining, i.e visiting the parents. In adittion why are’nt these better insulated to keep the heat in, and save re boiling.

This has solved the problem entirely.
http://www.insinkerator.com/international/hotwatertap/

98ºC water, instantly at your finger tips, right where you’d be filling up the tea kettle. Sure, it would cost much more than a tea kettle, and would require a plumber, but isn’t this just about the easiest way to do it?

IDiot pointed out a good solution.

I have a Senseo single serve coffee maker. They use a coffee “pod” to to brew individual cups of coffee. They are a wonderful thing. Easy to use and clean and great flavor. They also have an accessory that let’s you use the machine to make a cup of hot tea. 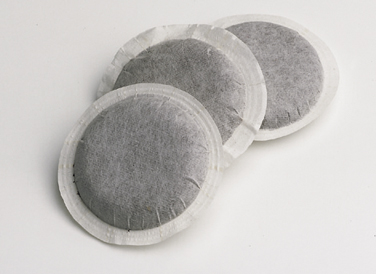 There are a lot of different brands of these coffee makers, but most could be used for tea also. When my machine finally bites the dust I will be changing over to the k-cup version of these pods.

I think these types of machine are a great alternative to using a kettle to boil water.

@Nurb I would argue that this hasn’t at all solved the problem because who the user is. That solution would be great for you and me but I wouldn’t want my grandad to have 98 degrees c water at his finger tips, I also doubt the care home would allow it. In addition as you’ve stated it would cost more and require a plumber, I’m sure my folks wouldn’t pay for it to be installed either.

@Ross I can see the look of bewliderment on the face allready. What on earth does that do.

I think the challange here is to retain the qualities and familarity of a kettle but make it more accesible based on the identified insights. In addition (this might be a bit of an arty farty bullshit comment) but there is also the social aspect of pouring a cuppa, the act of someone physically pouring something for you, i.e serving someone else other, playing a good host I just dont get the same feeling from these machines. Which is why I thought that ProductTanks serving method was on the right track. 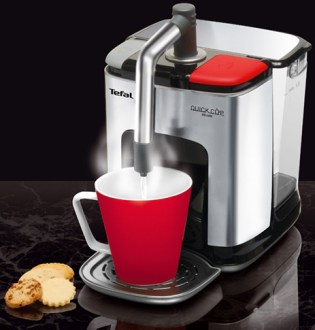 Tefal makes a water heater. you fill the reservoir then push the button. 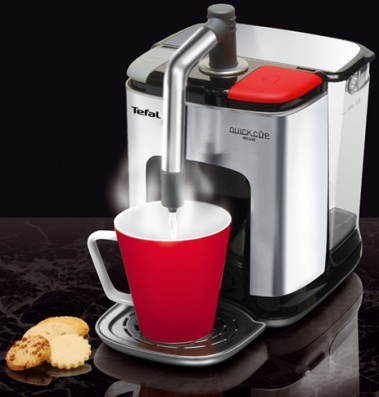 Thanks all for replying. It’s clear that one solution will never fit all. From my grans point of view, which is what started me on this in the first place, I’ve come to the conclusion that if money was no object the best solution would be a butler! However from a product design point of view and to keep her independence (as families no longer live together etc), the best solution would be a plumbed in tap as shown in Nurbs post, but the location of this tap would be critical. It would have to be extendable and placed on a draining board that led directly to the stove top, so that she could fill a pan of water without having to walk anywhere/lift the heavy pan over the shortest distance possible. This would then mean that draining the water after cooking would also be much simpler as well as filling a cup/pot of tea etc, without having to fill a kettle first. The sink would also need a mixer tap to supply cold water and warm water for washing hands etc, so she didn’t scald herself. See quick doodle attached that shows a spill proof hob sat in a sunken drainage area.

It’s a funny thing, but even if she had the money, she wouldn’t pay to have a super solution plumbed in, she’s of the generation that grew up with little and she just mentally can’t justify £240approx when a kettle only costs £15. So she’ll struggle on filling the kettle less, because she wants to remain stubbornly independent - although her one concession is a ride on buggy

My conclusion is that I need to concentrate much more on ‘design for our future selves’ as I know if I live long enough, I will eventually meet the same problems and with my salary I too will not be able to afford a butler, I hope the house I’m then living in has better solutions to keep me out of an old peoples home as long as possible.