Hi everyone,
I’m mario sisillo, an italian kids footwear designer;
I write here because I would like to have some feedback on this little project I put on to try to intercept the direction that Adidas’s Yeezy might take. I’ts a working progress so…any kind of criticism - advice or feedback on proportions, on rendering, on the communication or on the whole concept is more than welcome.
here’s the link:

I truly thank you all in advance, I’ll appreciate any of your thought about it!

Cool project! You’ll probably get a better response if you post some of the work up here rather than have people go to coroflot.
I like your thought process behind the logo, blending elements of the Adidas trefoil logo.

To me the sculpted/angular heel is a little too reminiscent of the Nike Yeezy’s. I like the aesthetic and I think it works really well with the wardrobe he’s been wearing on tour, but I think it might be too close to the originals for my taste.

The render looks pretty nice I think it could benefit from some more contrast, when I blur my eyes it all just sort of turns to black.

Would love to see your take on the outsole, could be a really good place to add some more little details.

Another thing to consider is that Kanye is apparently signed to be a part of the adidas Y-3 brand. Not sure how that plays into it. But might give bit more direction in terms of the logo.

Another thing I feel like your sketches had a ton more energy in them. You renders feel a bit robotic. Try and get some of that energy back into the final presentation.

Hi Choto, Thank you for your precious feedback!
Yeah, in some sort of way I did not wanted to go too far from the actual yeezy line…as the previous models were sharing many design elements. Given the frustration Kanye has been lately expressing and being Kanye so selfcentric (in a good way), my message is that nothing really changed, his flow of ideas are still evolving, beyond Nike and fully supported now by a giant too.
My take is more on the last and outsole shape, something less bulky and more sleek!
Or at least that’s what I was trying to put on the table…

lately Kanye has been wearing a lot of margiela’s sneaker wich is a replica of some adidas sneakers worn in the 1970s by the West German army as trainers. Those sneaker are based on one of the most popular outsole here in Europe, the outsole of the Adidas samba…a staple in the market since the 70!
So this is why, as the yeezy I and II were based on famous outsoles (the jordan IV and the Air Tech Challenge II tennis)
I decided to base the model on an iconic outsole taken from the adidas amazing catalog.
As we speak I’m improving the rendering, soon i will ask you some new feedback!

I truly appreciate your time and thoughts!

here are the sheets: 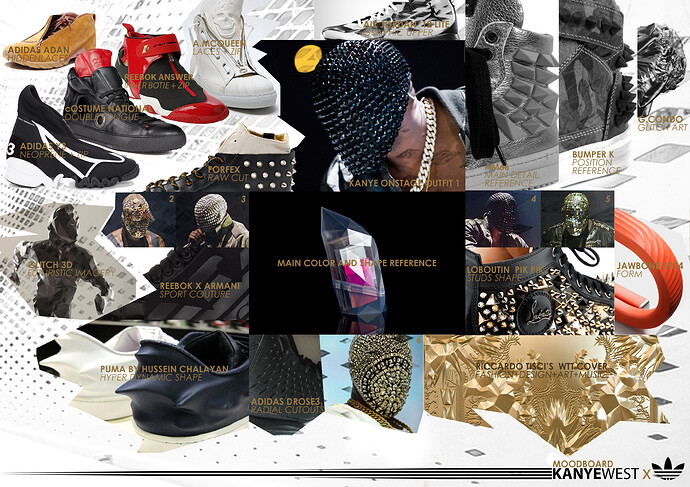 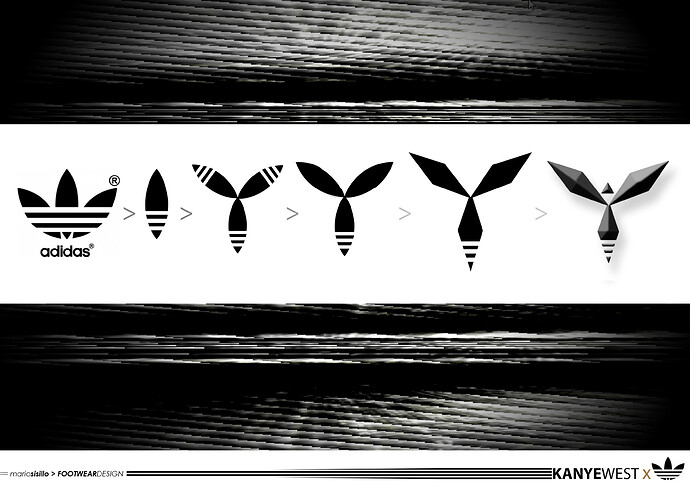 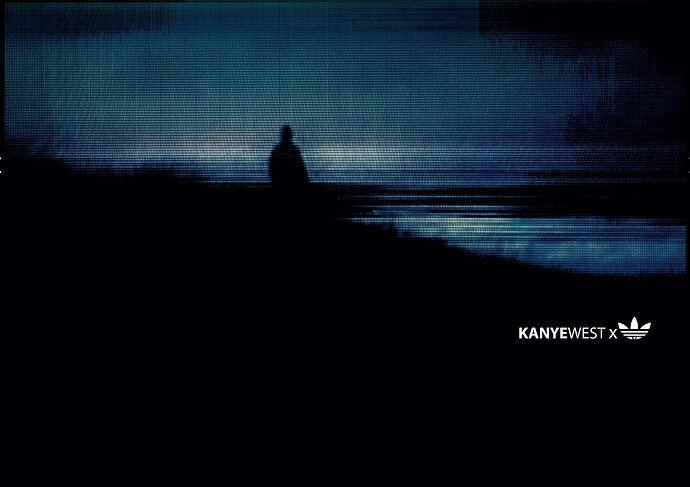 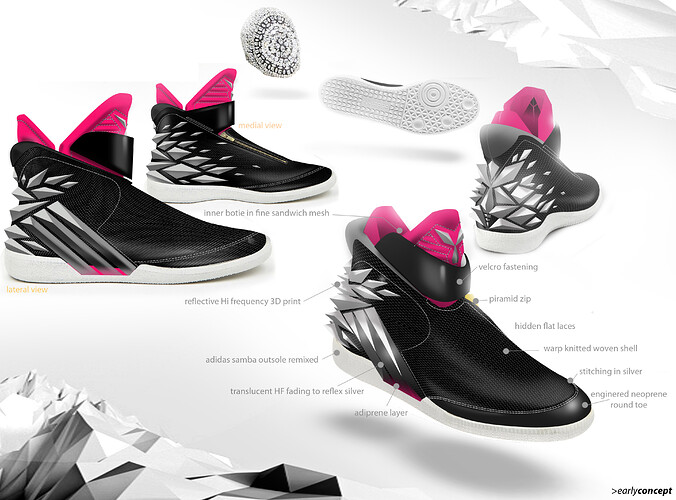 here is how I switched to the final direction: 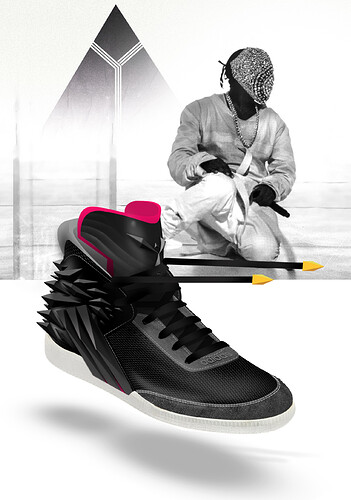 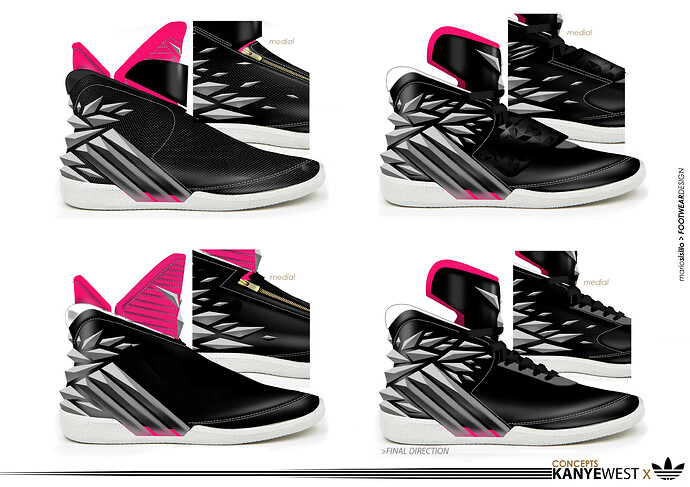 the final direction (for now 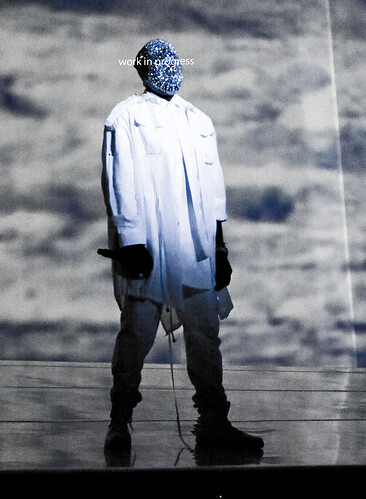 Another thing to consider is that Kanye is apparently signed to be a part of the adidas Y-3 brand. Not sure how that plays into it. But might give bit more direction in terms of the logo.

Another thing I feel like your sketches had a ton more energy in them. You renders feel a bit robotic. Try and get some of that energy back into the final presentation.

Hi Sain, actually as I was following the news of the deal I sticked with this:
November 25th, 2013 - Sneakernews posted in an article related to the kanye- Adidas deal:
“Keep in mind that this team up will not fall under the adidas Y-3 umbrella as was rumored and falsely reported by some in the frenzy of the past week.”

As for the final presentation - I will make it more dynamic and energetic! thanks!!!

I think the lace up version works pretty well. Nice integration of the Adidas logo into a pretty crazy heel counter. Also, good to keep a lot of the craziness at the heel. That way a normal person can wear them because they are rather sneaker like in the front with jeans on, but crazy in the back. “heel focus” is a pretty common design strategy in these types of products.

Hi Yo!
One of the many reasons why I posted up my concept here was to get your feedback!
(I was in uni when I started to follow the core forum and your advices to the aspiring designers

Actually…every post here has been fundamental to my career!

)
So, I truly appreciate your “co-sign”!

I was amazed by the 2011 Hussein Chalayan’s urban-swift by Puma, so clean on the toe and side panel but so crazy on the heel! the Yeezy 2 followed a similar path, and so am I.

I will point out this kind of trend in the presentation,
will soon finish the whole project and post it up back here!
Thank u for your time Yo!
Mario 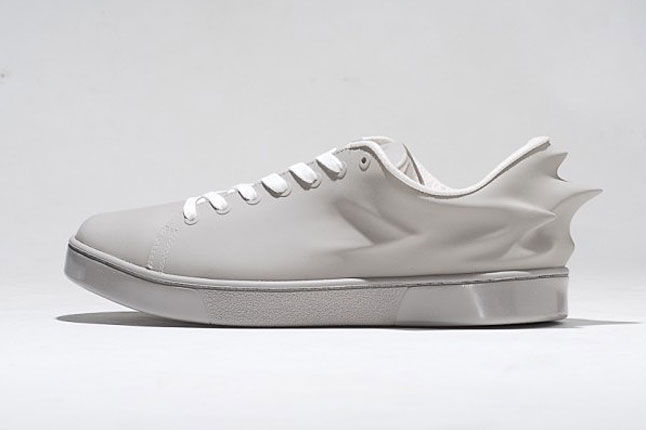 Diggin the triangle shards you having going, gives the shoe a nice sly nod to all the god stuff and pyramide related things he’s has been on lately. I would rock these!

Thanks Andre!
Triangles are so central to Kanye’s aestetics lately, together with the illuminati imagery “trend”, yeah;
I’m glad you like it!
M. 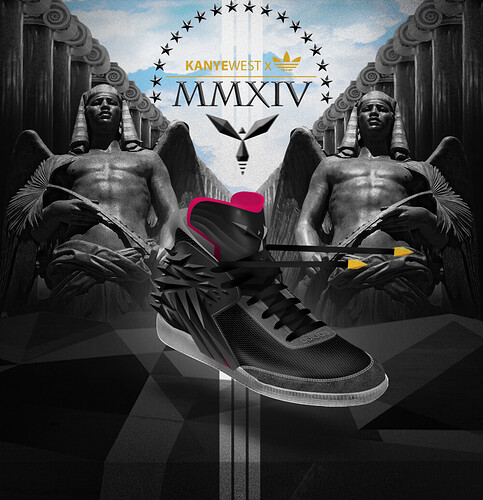 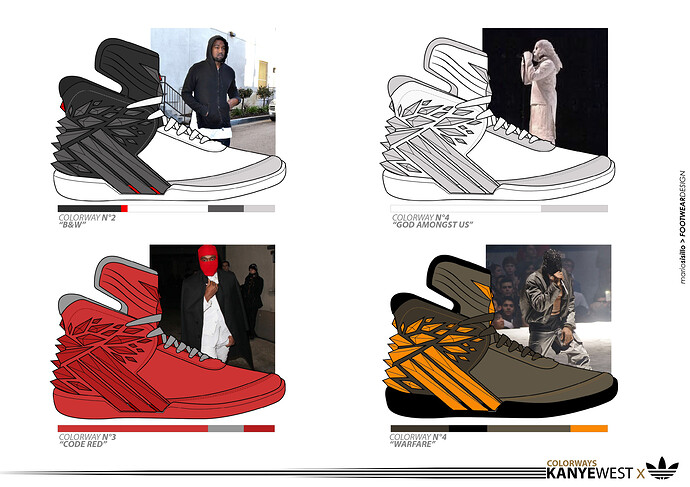