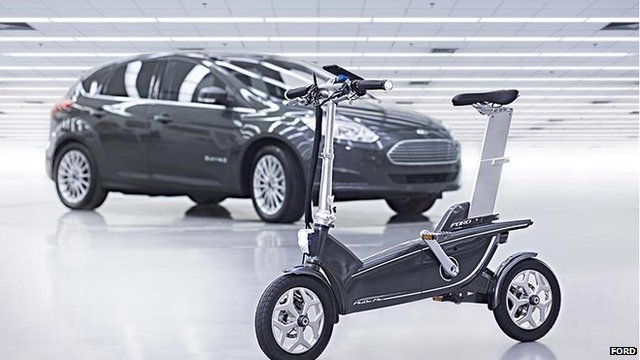 WTF? Who would have signed off on this? I guess it did get press…

Not exactly pretty. They seem to have showcased another one in this video (also more information on the project) Ford launches e-bikes at mobile show - BBC News

your logo here? You think it is off the shelf or custom?

For the sake of Ford’s design team, I’m praying for off the shelf. Maybe custom rims though. The wheels are nice!

According to the article VanDeBar posted.

“Ford’s e-bikes come in two flavours - one for use by commuters and one as a commercial bike for couriers.”

My problem with both is wheel diameter. The commuter looks dangerous if you hit a railroad track. The courier bike is a “standard” size, but there are other that are more standard. This is important when fixing flats.

My bigger problem with the commuter is weight. A folding bike needs to be carried on the train/bus/etc. A large battery is not light. If someone is so lazy as to get a folding electric commuter, what makes Ford think they will want to carry 40 pounds?