Hey guys, well this is my final for the jeep contest on speedanddesign.net , and I have to say Iâ€™m very happy with the outcome and I really spent a lot of time working on this. Probably my best work so farâ€¦â€¦and I would love to here some comments on what to improve on for next time… 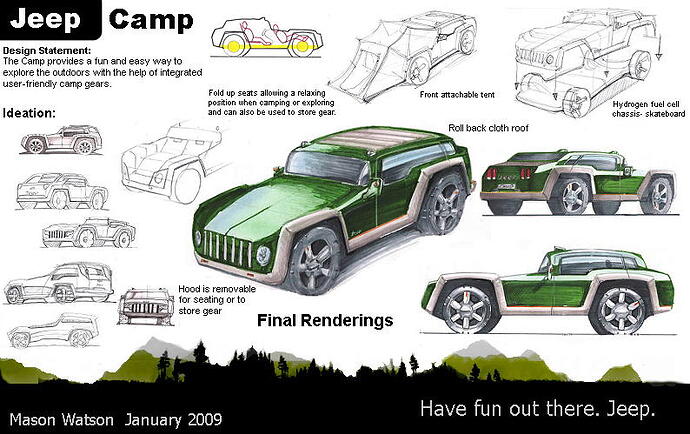 I remember you showing me your older work and this is defidently an improvement. Just work on your perspective view and I think your work will become much stronger.

Lunch Break- Somewhat beefier proportions. Less scratchy shading.
Use markers for your hard reflections, and chalk/pastels/airbrush for your curvature changes in the surfaces. 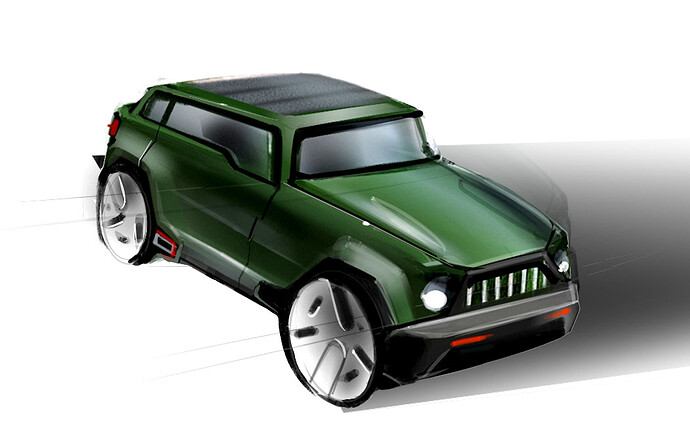 nice rendering, but it looks like yours is out of perspective…?

Yeah my windshield is off I think-

MBW17 I’d chew over those proportions a little more in your concept. Good start. 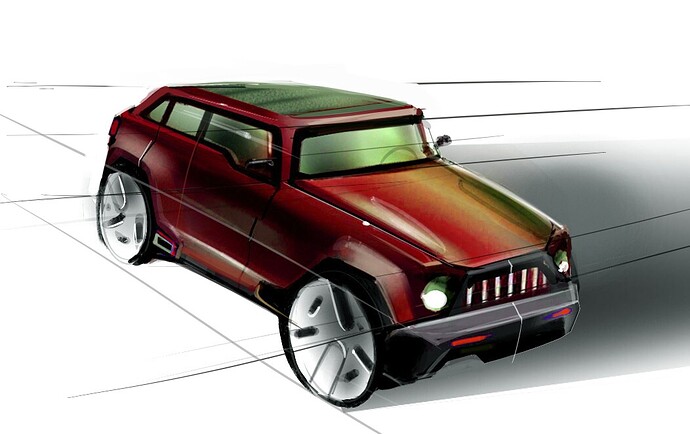 ok, thanks man for your help!

very FJ Cruiser-ish. what if it used elektric wheel motors? would you use such a long hoodline?

thanks guys for the comments…!

So, it it has the skateboard chassis with all the mechanicals under a subfloor, why have so much wasted space with such a long hood?

I personally find that the rendering style is not interesting. It seems really technical and not appealing. Add some expression and looseness to your sketches and renderings.

Good Idea by the way:)

The long hood is the crumple zone, and the place where the camping equipment is stored right?

yup, you said it

bumping this topic, just to spur some ideas

with a skateboard cahssis would you use such a long hoodline?

would u end up with a westfalia?

Slightly off topic, I sat through an interesting lecture by Dr Peter Horbury (Fordâ€™s Executive Director of Design in America) at uni once. He described the long bonnets typical of American cars as ‘putting the horses in front of the carage’. Apparently this is a hang up of the old days when horses were the power… people understood how horses worked and what they did so the motor industry followed suit in order to convince a reluctant public. So maybe your jeep is digging back into American history…?

Incidently he also talked about cars and faces, now I can’t stop seeing expresions on cars (I know that this is a well discussed point). 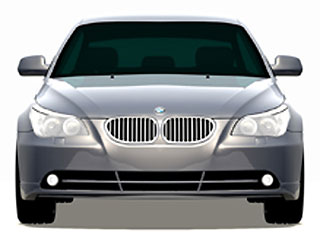 That study is almost useless in my opinion. This is a good example of brand being conflated with the aesthetics. Whenever we do brand studies we go out of our way to take out brand. In the case of power-tools studies that I have worked on, the color blinds mosts users to difference in form. People are more attuned to seeing differences in automotive forms because of their ubiquity, scale and availiability in colors. The questions these researchers were asking amounted to “Hey which do you like- the Toyota or the BMW” DUH- which one are you going to pick. All you ended up with is a description of a high end vehicle.

This would have been a better study if they had angry, sad, slit eyed etc versions of the same BMW. I am not sure that the whole anthropometric thing has too much merit. Peter Horbury at Ford was supposed to have asked his designers to design slit eyed cars for China. How far do you take it- apply lipstick on the grill???

Studies like this tend to limit designers more than free them. Generate ideas first then test them. Too many people with fixed ideas of what a car should look like. Then someone comes along to disrupt that- and the crowd follows.

my suggestion, is that you desperately need nice large(r) renderings of the Jeep Camp concept in its transformed formats. I can barely see that it turns into a tent. a few beautiful renders of the Jeep straight up from different angles, one beautiful render showing the tent deployed (include some interesting options for the tent, not just oh yeah it turns into a ‘tent’), and a beautiful render of the modular top. Maybe show the interior of the tent and how the interior of the Jeep accommodates the tent sleeping with unique features. Show how the tent is accessible from the front seat, how the front seat area integrates into the tent, are there radio/air/heat control hidden in a cover on the rear bumper so I can control my environment in the tent? Nice idea overall.

Myself, on my last Volvo 245 wagon, I drilled in and installed male button snaps on the opened tailgate hatch, so I could attach a tarp that had female button snaps added to it. Since the tailgate lifted up, you had yourself a very nice tall/full sized tent. I plan on doing the same thing to my 2002 V70 Volvo wagon here shortly, with a higher level of execution this time around. Nicer materials, super wind resistant, and more.

ok thanks for the feedback!

and yes now i know what to work on!