Once worth $3billion dollars, and famously and early company to have a CCO (Yves Behar), Jawbone is liquidating: 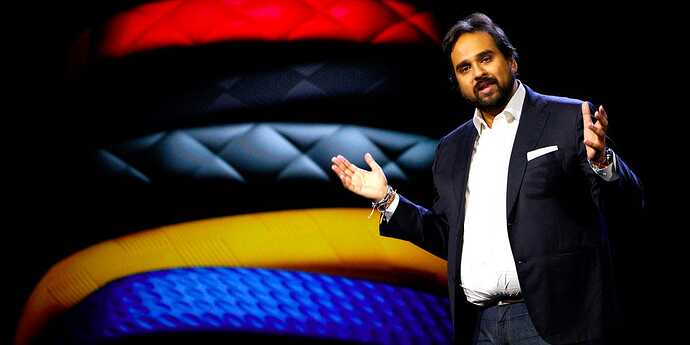 Fitness-tracking company Jawbone, once worth $3 billion, is shutting down and...

The company hasn't released a new product in about two years.

The whole wearable market is in pretty bad shape. There just wasn’t as big of a market as people thought and the pedometer race to the bottom cost every one pretty bad. I think the only companies that will survive are those with other businesses to float the wearable BU’s (Apple, Samsung, Garmin).

I think there troubles began at the decision to enter that market at the expense of their core revenue makers. 'm just an outside observer here, but my analysis was that they were always making too many hard pivots. They started to grow with BT handsfree sets, then pivoted to bluetooth speakers, which was very successful. They could have filled in the gap between those two categories with BT headphones and other types of wireless music and telephony devices. Instead they let Beats and Bose come in and take their lunch money while they were working on the fitness tracker stuff and then released the Jambox updates way to late with less features. Like I said, just an outside observer, but my thoughts are they continued to confuse the retailer and the consumer while on continual silicon valley start up mode instead of creating a cohesive line and brand story (like Ultimate Ears and JBL did) and perhaps only used design on the surface vs using it strategically. Really guessing at the last one but I know the Jambox was actually developed by an outside house called Foxl and pitched to them. They bought the guts and styled the box.

They only have the fitness trackers on their website now. Wow!

I had no clue that Jawbone had been valuated at $3B. Holy cow! I really need to start my own BS company…

They may not be gone for long:
http://pocketnow.com/2017/07/07/jawbone-liquidation-spin-off-startup-founded-different-focus

This is tightly coupled to the space I work in now (big data + healthcare) but if you look at what happened to Withings being acquired as part of Nokia’s Healthcare unit, a number of players are trying to get wearable more into the healthcare space - devices that your insurance might prescribe you to monitor your health following treatments to reduce costs. In cases like this (for example, being able to monitor how much someone walks after a hip surgery) they can potentially save tens of thousands of dollars for what is otherwise a very “cheap” tech product. But to need that they need higher tech/more reliable products than what the consumer could afford. Will be interesting to see where that lands them in a year.

In cases like this (for example, being able to monitor how much someone walks after a hip surgery) they can potentially save tens of thousands of dollars for what is otherwise a very “cheap” tech product.

I put their chances at nearly nil.

Healthcare is a world where you cannot use puffery. You cannot make a claim without evidence to prove the claim. And in this particular instance, jawbone’s product does not and likely will not get direct reimbursement. So the bottom line is jawbone’s product is an expense to all healthcare providers. Even if jawbone gets data to prove their product will reduce patient recovery time in a hip replacement, if the hospital doesn’t get reimbursed, what is their motivation to buy it? They get paid for the rehab no matter what. And the bean counters don’t care about better outcomes.

Jawbone’s best chance is to prove their device reduces readmissions (patient gets discharged, comes back within 30 days with the same problem). CMS penalizes hospitals with a readmission rate that is too high. That penalty is much higher than the cost of the jawbone product and it is easy to make the roi. Getting the evidence to prove a lower readmission rate will take them 2-3 years. I hope they are well funded. Oh, if they repeal Obamacare, the readmission penalty will also be repealed as it was a part of that law. Jawbone is dead in the water at that point.

At on point this is a brand that had about 40% of the bluetooth speaker market. They essentially made that product category main stream. Beats and Bose predictably followed and took share, but also grew the pie. What was surprising is that JBL and Logitech UE BOOM entered the space and essentially took up all the rest of that share with products that were louder, had better battery life, were more durable, and had features like pairing, all while they were distracted chasing the health tracker space. To me the lesson here was that they could have doubled down on their core market and really continued to own that space as the market expanded, but perhaps they moved on too quickly thinking they had more loyalty than they did in the space that kept the lights on.

It’s the new troubled corporate paradigm, isn’t it? Chase the golden ring instead of sustaining your going concern.

We used to call it “shiny pebbles” syndrome… you take a walk on the beach and see a smooth shiny pebble and say that neat, and pick it up. after 20 minutes you have an armful of pebbles … you reach to pick up just one last one and spill all of them… this analogy might only work by the beach?

I grew up 15 minutes from the beach in Florida. Not many pebbles there, but I do understand it.

From USA Today. Bold emphases are my adds. Wonder who will do the design for Rahman’s new company?

Tech products have gone out of business before, but they usually tell their valued customers what to do next.

Fitness tracker and Bluetooth speaker company Jawbone, which is in the process of liquidating, instead has left a trail of irate customers with little recourse but to vent online.

Visitors to its website see a company that looks like all is well, and is promoting products – except that there are no links to buy them. Jawbone’s Amazon, Facebook and Twitter pages appear as though the company still has its doors open.

Yet a company headquarters phone number directs callers to another number that has apparently been disconnected. Customers complain in online review forums of leaving many messages in email and phone form that haven’t been answered.

The Better Business Bureau just awarded Jawbone an “F” for “unanswered complaints.” The BBB notes there are 521 complaints filed against Jawbone and 190 that haven’t been responded to.

She has three dead Jawbone fitness trackers and has been trying to get a response from customer service since November, via phone, email and Twitter. She finally heard from the company Monday with an automated email.

“Over the past few months, we’ve been transitioning to a simpler care experience,” the email, shown to USA TODAY, said. “These changes took longer than expected, but we’re excited to share they’re now complete and we are ready to address your request. Our records show you contacted us with a support request between November 1, 2016 and July 1, 2017. If you still need assistance, please click the button below to submit your updated request.”

Camman did just that but has yet to hear back.

Last week, tech industry website The Information reported on the liquidation proceedings, saying > co-founder and CEO Hosain Rahman is starting a new company to make health-related hardware and software services> . The Information says the new firm will take care of customer service. Jawbone has just yet to show any sign of that yet.

The demise followed years of reports the San Francisco start-up, once valued at $3 billion and the beneficiary of $950 million in venture capital funding, according to Pitchbook, was on shaky ground. Jawbone had been locked in a heated battle with Fitbit for the wearables market, with products that help you count daily steps and track sleep.

But Fitbit has been way ahead. In 2016, Fitbit shipped 22.3 million devices, and McIntyre guesses Jawbone saw “less than 20% of that.” Gartner estimates 34.7 million fitness trackers were sold last year, including from companies such as Garmin and Samsung.

Just more opportunistic BS, opportunistic bandwagon crap overly styled and pitched to the general public as “special”. My phone (and every phone before it) automatically monitors how many steps I take, and no one had to bill my insurance $400 for a special “medical” device to get that monitoring, but Rahman will jump on that bandwagon without a second to spare.