So a friend told me about this, it seems dodgy but he has gotten some things from it (he is a student). Some how I have to feel that the terms and conditions are really trying to stretch the law. 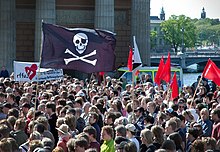 Warez is a common computing and broader cultural term referring to pirated software (i.e. illegally copied, often after deactivation of anti-piracy measures) that is distributed via the Internet. Warez is used most commonly as a noun, a plural form of ware (short for computer software), and is intended to be pronounced like the word wares /ˈwɛərz/. The circumvention of copy protection (cracking) is an essential step in generating warez, and based on this common mechanism, the software-focused

“Warez” refers primarily to copyrighted works traded in violation of copyright law. The term generally refers to illegal releases by organized groups, as opposed to peer-to-peer file sharing between friends or large groups of people with similar interest using a darknet. It usually does not refer to commercial for-profit software counterfeiting. This term was initially coined by members of the various computer underground circles, but has since become commonplace among Internet users and the mass media.

of course that’s not legal.
its the internet version of bootlegging.

by buying these products from this source you are supporting bottom feeding leaches…not to mention I wouldn’t trust them with my CC number.


My opinions about pirated software and music has completely changed the older I’ve gotten. When I was a self-centered student I didn’t think much about some free music or software, justifying by saying that I was a poor student and many of the applications where prohibitively expensive.
I now feel totally different. People and companies work their ass off to make the tools we depend on as designer. If you can’t respect that, you deserved to get your fancy widget ripped off by someone who couldn’t afford a snobby designer.

Note: putting the control of music back in the hands of musicians and listener is a good things. Makers need to be rewarded for their efforts.

closed an thread edited. we can’t have links to illegal sites on core.