Is Samsung/Android guilt of copying Apple?

In the heat of this patent trial, I thought I would bring this up.

To me, I think the world is built on one great idea standing on another idea that came before it. What matters is HOW FAR you have taken the previous idea. Having that said, there are times when one hasn’t taken a pre-existing idea far enough but already calling it their own, and that’s what makes me very uneasy. This is exactly how I think in the case of the original Android OS and some of the Samsung smartphones. See, to me, you wouldn’t ( or I wouldn’t ) dare to call the “Windows OS” is copying Apple because it has learned from the iOS but taken very far from it, and it is a completely different animal. As a designer, I respect that, and I know someone in their studio believes they can come up with something original ( or far enough from what has existed ).

( on the other hand, I also think that Apple has “copied” its competitors’ product features in different occasions )

Tough call… Although I think in many ways it is a case of the pot calling the kettle black given Apple’s admitted “admiration” of Dieter Rams/Braun’s products.

This whole litigation gives me the impression that the sum of the apple models, drawings and
CADs tries to covers each and every variation on a 3d rectangle ever thought of by the human mind.

They try to cover peaches and pears as they say they thought of them during the design process for the apple.
Normaly patents do not work that way. I’d bet my 50Cents on them loosing the battle.

This whole litigation gives me the impression that the sum of the apple models, drawings and
CADs tries to covers each and every variation on a 3d rectangle ever thought of by the human mind.

I had an illustration instructor who routinely ripped our renderings off the board and wadded them up. His explanation was that we shouldn’t fall in love with given sketch, but should be looking forward to the next idea.

You can either look behind in the rear view mirror, or ahead out the windshield. I grow weary of the whole thing.

Screw it. Declare imminent domain on the related IP and no one gets to monopolize the market.

I think this case will come down to that. Does the judge confuse a Samsung phone with an iPhone. I wouldn’t.

Not a good day in court for Samsung. Here Is the Entire 132-Page Samsung Internal Report Apple Released into Evidence Today 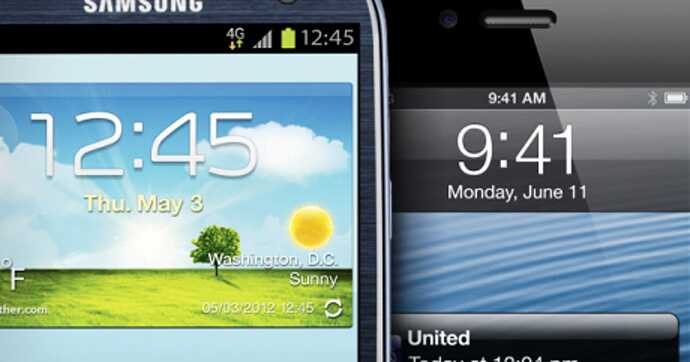 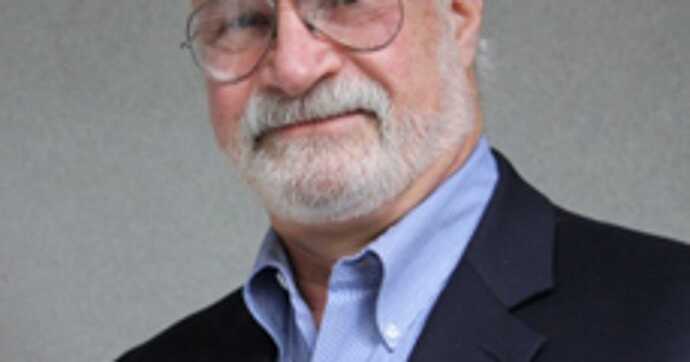 On the witness stand for Apple, an industrial designer says that Samsung is clearly infringing on multiple patents with its phones and tablets.

Bressler is just one of several design specialists Apple is calling on to make its argument, and told the court that the technology company was paying him $400 an hour for his services, which so far had resulted in $75,000 worth of work.

Nearly 200 hours of work for design expert Peter to clarify something that is being charged is an “obvious copy”.

Having been seated in arbitration across the table from a hired “design expert”, listening the him claim absolutely that a roughly sketched curve and four circles on a piece of paper was equal to a step-in snowboard binding, paid expert design experts have lost all credibility.

Having said that, is there anyone on this board that would not have difficulty taking 75,000+ dollars for a positive design opinion for the paying client?

Rephrase: Is a generously paid subjective judgement ever credible?

The idea of this is slowly gelling for me.

If you go minimal, a screen, a black border, round corners and a aluminum back, do you really get to claim the legal high ground because you got rid of every extraneous detail first? The risk in going minimal was that it would be easy to copy. The reward for going minimal first was billions of dollars of sales and the biggest impact a consumer product has made this decade.

Apple has won, for them to attack a runner-up now is just embarrassing. 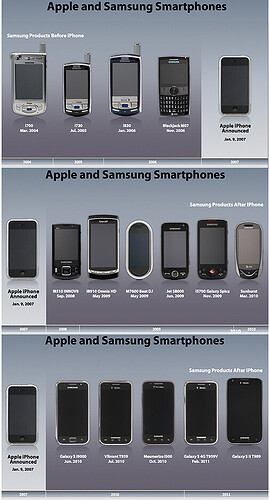 I don’t get it why other designers don’t get it!
If somebody copies the golden arches on a red background of McDonalds that is a clear infringement because the logo is so iconic and recognisable.
In this case a company created a product that is so iconic and recognisable it doesn’t even need a logo on the front!
It is irrelevant how easy to draw and how simple a design is. A copy of a simple logo (e.g. golden arches on a red background) is still a copy.

No doubt about it: Samsung was copying the iPhone archetype for their smartphones. There are a million different ways to design nice smartphones. The new SONY Xperia S is a great example. Samsung designers were clearly guided by their product managers & bosses to copy the iPhone.
For that stupid act the company should pay, otherwise those same people will continue to steal & copy other designer’s ideas. The respective managers are still working at Samsung and probably got fat bonuses because they sold a lot of phone copies. They would have continued to copy because it pays off. Next time it could be your designs that get ripped off! Nobody should get away with it and I salute Apple for standing up for their designers.
The courtcase already has the positive effect that Samsung designers are now allowed to be more different and original to avoid future legal action. 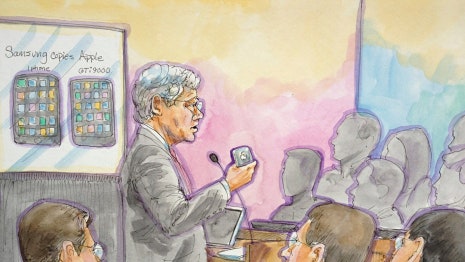 Apple has a strong legal case against Samsung in their patent fight. But it would be better for technological innovation if Samsung won.

I like this viewpoint. It mirrors my experience in the sports equipment industry.

In general, we should want good ideas to be copied. If you’ve got a Samsung phone, be grateful that the engineers at Apple helped design the dialer. Yes, inventors need incentives to invent. They need to know that their ideas can make them money and that building something brilliant can make them rich. And in some industries—particularly ones, like pharma, with huge research costs—you do need strong patent protection. But technology doesn’t work like drug development. The industry evolves quickly, and you need to try to be first, whether you get patent protection or not. Enforcing patents can help you lock in profits; but patents won’t change your approach to research.

This summer, Judge Richard Posner dismissed a case between Motorola and Apple, and then proclaimed in an interview that the fighting between technology companies shouldn’t be surprising. “As in any jungle, the animals will use all the means at their disposal, all their teeth and claws that are permitted by the ecosystem.” He then added, “It’s not clear that we really need patents in most industries.” 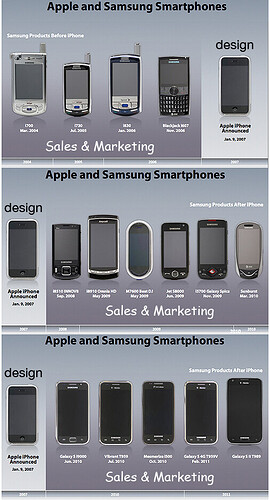 The same picture repeated as above, two reactions. I find the Samsung more unattractive than I found the original thick soapbar iPhone. Secondly, a poster showing one hundred square touchscreen phones from a dozen manufacturers would show only slight differences from the Apple “paradigm”. It is a chrome ringed box around the only shape that a LCD screen comes in, a rectangle.

Another good set of observations:
Who cares if Samsung copied Apple?

If you go back to the mid-1990s, there was their famous “look and feel” lawsuit against Microsoft. Apple’s case there was eerily similar to the one they’re running today: “we innovated in creating the graphical user interface; Microsoft copied us; if our competitors simply copy us, it’s impossible for us to keep innovating.” Apple ended up losing the case.

But it’s what happened next that’s really fascinating.

Apple didn’t stop innovating at all. Instead: they came out with the iMac. Then OS X (“Redmond, start your photocopiers”). Then the iPod. Then the iPhone. And now, most recently, the iPad. Given the underlying reason that Apple has been bringing these cases to court was to enable them to continue to innovate, it’s hard not to ask: if copying stops innovation, why didn’t Apple stop innovating last time they were copied? Being copied didn’t stop or slow their ability to innovate at all. If anything, it only seemed to accelerate it. Apple wasn’t able to rest on its laurels; to return to profitability, and to take the mantle they hold today of one of the technology industry’s largest companies, they had to innovate as fast as they could.

But does that make it morally right? What about flipping that question around, if Samsung didn’t want to create anything resembling Apple would we have another fresh direction like Windows Phone 7 and thus more innovation from the opposite end?

Regarding the first mid 90s case could you say that Microsoft copying them almost lead to the collapse of the company? Apple may be resilient enough this time around but not every company is, shouldn’t we be cheering for stuff like this that promotes more honest corporate behaviour?