I have been using 3ds max for rendering furniture designs but I have been advised to use SolidWorks and PhotoWorks to produce designs. Would you recommend Photoworks for creating woods, and can anyone share some images where they have created wood products. Any examples I have been shown don’t look great.

3DS Max is better for rendering- period. Photoworks is bundled with Solidworks, and can create wood textures. Solidworks would be good to design wood stuff- with thte dimensioning and all. What is your current workflow

Max is the better renderer, keep it and make your designs in Solidworks. Import them into Max and apply your lighting and materials that way. Solidworks rocks the house for assembly drawings, too. It could probably help you calculate materials for your furniture as well.

Sorry about the size of the images. These were rendered in SW 2004 with an old version of Photoworks (before depth of field and other goodies). They have expanded their wood grain options and now they are fairly convincing. Mapping the grain pattern to your liking takes some trial-and-error.

I would like to see 3D Max vs Maxwell… Hell I would dare say that Maxwell is anf could very well be king if only because it is a universal adapter.

All renders are time and how much you want to put in to them. I have seen some pretty decent results from photoworks. Problem with exporting to max is losing parametrics.

3D Max what? I don’t know anyone that doesn’t use a Max rendering plug-in; VRay, Mental Ray, Brazil, whatever.

Sorry about the size of the images. These were rendered in SW 2004 with an old version of Photoworks (before depth of field and other goodies). They have expanded their wood grain options and now they are fairly convincing. Mapping the grain pattern to your liking takes some trial-and-error.

Hey Plastics - how did you get the floor of the scene to be that textured silver surface? That is cool beyond belief. Did you do an assembly with your part sitting on the “floor” (the floor being a big plane of some kind what that texture applied to it?)?

The floor is most likley just a giant plane with a texture.

I would say like they suggested that you keep Max to do your rendering. The biggest problem with creating a convincing wood model is UV Mapping.

The pictures posted above show one of the biggest problems, and thats the end grain. That product would most likely be made from wooden laminates, not carved from a single block of wood (how it appears now). It’s going to be probably impossible to achieve that in SW but is definately doable in Max if you know how to work with textures and projection mappings.

Also most procedural wood textures aren’t very convincing. Having access to some high resolution textures of the actual wood you plan on using would be invaluable of you’re really trying to pass the renderings off as realistic, vs just saying “This is the object, and in real life this would be some kind of wood”

It’s sitting on the floor with a chrome plate - cast texture mapped on it. I used this on a bunch of renderings a few years ago, but then moved onto a gloss white surface.

Sometimes I use a part that acts as a floor, but most times I’m lazy and just use the floor setting in Photoworks.

Cyberdemon: You are right about the end grain. These parts were designed as laminated plywood. I actually considered modeling the layers so I could get the grain accurate - but then got lazy (again). Aligning the grain direction becomes tedious, but I imagine that’s true in most rendering packages.

I haven’t used 3D Max or Maya, but because they are serious rendering packages instead of an add-in module to an engineering software I am guessing they will do a better job with wood if you need to get serious about grain.

i haven’t much played around with photoworks (i mostly hear that it isn’t so good), i like to use maya (MentalRay) for rendering…this was my first attempt at wood, but i’m pleased with the result. the end grain is something i’ll address in future models–i just didn’t have the time to for this project. 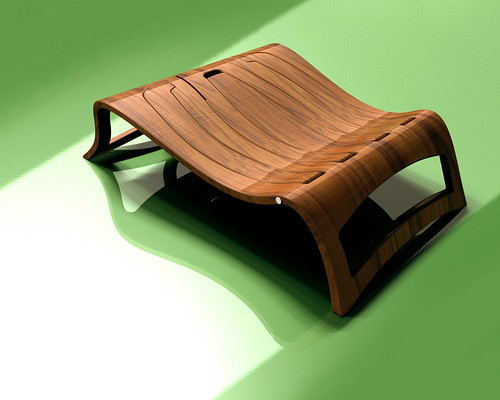 That looks pretty convincing. The reflections on the wood also look really good for some laquered wood.

In a model like that the end grain is a lot less noticable since its such a small part of of the object and most of it is in shadow.

Photoworks can do decent wood textures, but you’ll really want to get your own texture maps, because all the included procedural textures are rubbish. PW is good for doing quick renderings, and passable for more complex room setups. Doing a really good complicated render takes tons of setup time though. I’ve got some good images, but nothing I can post at the moment. I can email them to you if you want.