Don’t know if anyone cares but it is bloody freezing outside here in Jersey!!! It was 8 Degrees F when I came in this morning. Hope it warms up soon.

I checked the weather back at school, and Cincinnati is at 8* right now.

Though currently it is 27* over here.

it was 45* last week in socal (orange county), and rainy. lows in the low to mid 30s. there was snow in the saddleback mountains behind my home @ 2000ft. the san gabriel mountains were completely covered. we had a break between storms on tuesday. the air was clear and you could see the snow-draped mountains. it was beautiful. it’s been in the 50s, low 60s over the weekend and clear. it’s raining again.

i don’t mind seeing snow from afar, but i refuse to live in it anymore.

Yeah man. Can you believe the traffic problems this morning? Coldest actual temp I’ve seen here so far was -26. My car wouldn’t start so I got pissed and punched my seat. The thin leather in my 97 audi ripped to the shape of my fist.

It is the longest and coldest stretch in Vancouver in over 40 years, or something silly like that.

We had a dump of close to 2 ft of snow in 2 days. The temp isn’t bad right now, but it was -27 Celcius (~0 F) with windchill on Saturday. That cold is unheard of in Vancouver. It typically hoovers right around freezing +/- a couple of degrees. Just cold enough that nothing really freezes and makes you wet AND cold. I am actually enjoying the colder weather and snow.

11 today in Montreal. It was around 3 last week. Pretty normal. We’ve had a lot of snow though. Last year was the second most accumulation of snow, this year is predicted to be close to a new record again.

my car does not even warm up on a 15 minute drive. Chicago is minus 3F

its a toasty 12degC in London today its been yo yoing from quite nippy to mild for the past few weeks.

You’re right…I got my lions crossed.

Someone built a about a 6.5 foot igloo in the park across the street… nuff said… 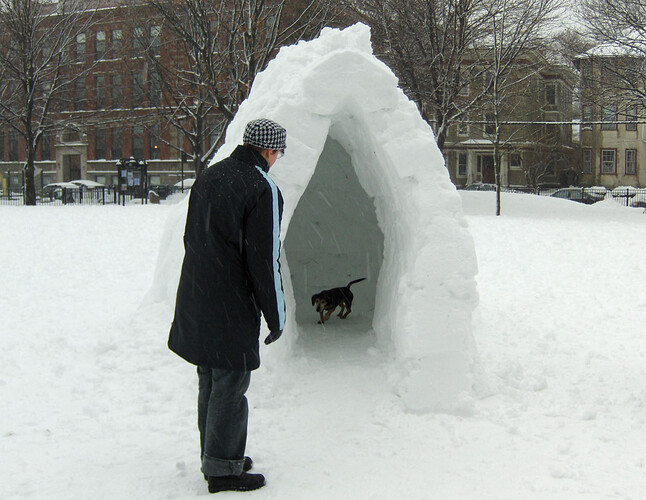 its a toasty 12degC in London today its been yo yoing from quite nippy to mild for the past few weeks.

Strange huh? I didn’t need to use my man tights for my ride into work all last week

I just moved to the Twin Cities in August, and this is brutal!

-5 yesterday in Chicago with 40 MPH WINDS!!! F*CK THIS! Any design openings in Miami?

Glad to see I’m not the only one that feels like they are liveing in the artic. I am heading south tomorrow for the holidays. Can wait for the warm weather.

-5 yesterday in Chicago with 40 MPH WINDS!!! F*CK THIS! Any design openings in Miami?

Hehehe…I can relate…I moved away from Chicago 15 years ago and found the Eden that is Vancouver (if you’ve never been here, you should visit). There’s irony in the fact that I moved to Canada for better weather than Chicago, but it is most definitely better.

The true irony is that I am actually finding that I am MISSING this weather. Go figure.

Combine the lack of true season changes (there is typically no autumn or winter here). We have some of the most amazing weather from June until about September 3rd, and then someone flips a switch and it starts to rain.

So, maybe I am weird, but I love the snow and cold. Probably makes it easier knowing that it won’t last until May.

I’m with you IP. I love cold weather, and that’s why I live up here in the arctic tundra of the upper midwest. At least it’s not Winnipeg…

It was -23 with the windchill yesterday…so I tried all weekend to find nice winter boots.

Is it me or it is near impossible to find nice winter boots for men?

What kind of boots are you looking for? Fashion takes a back seat to comfort, at least in Montreal. I bought some Salomon boots that are water proof and insanely warm. I get uncomfortable wearing them inside for more than 30 minutes.