A company in Iran is now manufacturing toy models of the UAV they captured. Politics aside, it’s ballsy and amusing.

Would you buy one? 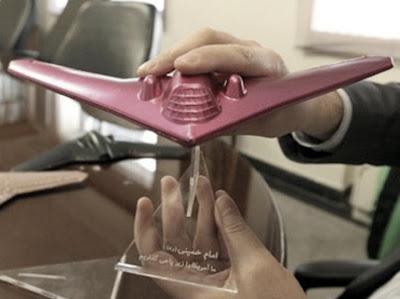 Politics aside … what is the point of your question?

My wife is Iranian, so I can say the following with some confidence & knowledge;

The Iranian government of today seems to be a group of uncoordinated, infighting, irresponsible, bully-tactic-loving, name calling, non-strategic amateurs who don’t seem to understand that there are places on earth outside their country where people actually live peacefully and without neither a chip on their shoulder nor the insecurities those folks in power clearly possess. For some odd reason, the folks in power within that country seem to think that their own population and the rest of the world lie in wait, scared of them and fearful of what they might do next. They like to throw verbal and symbolic rocks in the hope of getting everyone frustrated, it’s quite comical.

To answer your question: no, I wouldn’t buy one, it looks poorly detailed and is an odd colored resin!

Ok, I’m off the pulpit! And this is so childish I won’t even tag my signature to it!! lol

If this is getting political, fine. But it’s moving to OFF TOPIC. Just keep the discussion civil, please.

art and politics should not mix!

I’d buy one if it was a quadrocopter.

Quadrocopters are so in.