At 7.6mm in thickness and 112 grams in weight, its the thinnest and lightest phone Apple has made. The case is entirely glass and aluminum, with a much different looking back side all in metal, and a wider metal ring around the perimeter.

Choosing perhaps not to mess too much with ‘perfection’ (in terms of impact on the smartphone market), Ive & co. have not substantially changed the physical interaction and touch points. The perimeter ring could be about the same thickness as the iPhone4, its hard to tell from photos.

Personally I’m not in favor of the new design, although on the interface side having the wider/taller screen and more apps will be interesting to experience. There are probably tiny details that reveal themselves once in the hand of the user that make it better than 4.

Any thoughts from Core77 forum contributors, the benchmark for industrial design community-speak?

Whole lot of technology in an even smaller form factor with a continued OCD approach to quality and precision is getting pretty impressive.

7.6mm for a device is getting to be absurd. Even the Droid Razr “Cheats” by measuring the overall thickness and including the Camera bulge to fit the thick components.

Do I love the graphical breakup of the rear? No. Am I going to buy one and put a case on it anyways? Yup.

The bottom details feel higher resolution, definitely more comparable to the Lumia 800/900 top/bottom details now.
I think that this has to be experience in person to really judge.

Also, more props to Apple for not being afraid to stay evolutionary on this pass.

On a side note, I’m really interested in the earpods. Those look very cool.

Ditto on the ear pods. Finally. But how will I fit a fuzzy foam thingie on them?

I’m looking forward to checking one out in person. Very curious about the updates to the iOS coming… and yes, mmmm, EarPods…

What are their best competitors in your opinion? Nokia Lumia? 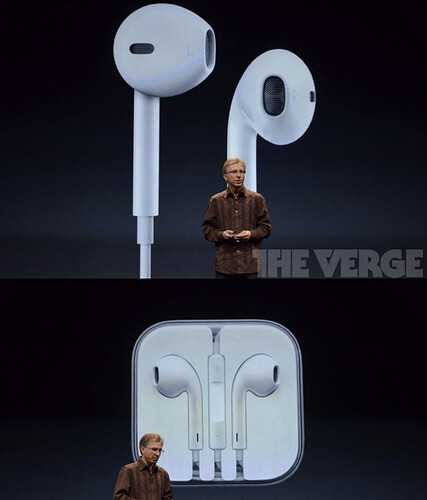 There’s a lot of hate being directed at this over on the whirlpool forums (Australian tech forums).

I think a lot of people have too high expectations. I’ll be upgrading from the 3Gs which is 3 years old and can’t keep up with high res apps, so I will be choosing between this and maybe a Samsung, but have an iPad so will probably be going for this.

It was probably always going to be a ‘sensible’ redesign, however a lot of people are attributing the lack of wow factor to the absence of Steve Jobs. I wonder if it would be any different is he was still around. Could he have pulled another huge innovation out of the air? We had retina display on the 4 and siri on the 4s. I think they both set the bar really high.

In regards to the ID, the headphones are cool, so is the reversible connector. A lot of moaning about compatibility but I don’t see people whinging that hard about other cables.

I love how they embrace the variation (we’re talking mircons though) in parts between the case and glass and optimize their assembly and part handling robots to get the best (of 750 parts) fit for each case…that part made me giggle. The images look SO tight on the parts, it’s crazy, can’t wait to hold one. I will be preordering ASAP. I can’t believe people are complaining about the connector, it’s obviously meant to be the new standard, gotta make the jump sometime.

The earbuds are interesting, the overall form is very organic, but the pill shaped details are so rational in comparison, it’s a little bit of a weird juxtaposition to me. We’ll see how they feel, sound, and look in person I guess.

What I find however ( and may be more technology than design) over last few versions (4-4s-5) is a lacking compelling reason to upgrade. I’m not moaning that it doesn’t have whatever latest tech per se, and I’m certainly an early adopter but seems they only really having something “I have to have” every 3 gen or so. Maybe that’s the business model to coincide with contracts. Dunno. I had first gen, 3GS , 4s. iPad first gen. Hard to justify new hardware where there is little change, though I respect the evolutionary process and not change for changes sake. Just saying, I would love a new iPhone, but don’t feel lacking in speed, screen rez, and 4s is hardly a brick so will wait for a bit. I could see something functional in design adding to the momentum. Kickstand, faceplates,etc. not that apple , I know but when to most people specs and processors is irrelevant would help in differentiation.

Fwiw, new connector sounds great. Have to move forward sometime. Though was a bitch when I had the first iPod on FireWire and the moved to USB.

I am fascinated that they are able to generate such excitement over such tiny incremental details. Conversely, I don’t think the details are generating the excitement. The industrial design is the same as the previous version.

They have successfully engineered cyclical excitement and desire to consume and reconsume. That is the insanely great part.

I can’t get that excited over the phone - a BBC article likened it to a Toyota Camary. Great car, but everyone has one and they’re a little boring now… I tend to agree.

I couldn’t get over how beautiful apples communication is. This page here: http://www.apple.com/iphone/design/ is just

INDEED
First time I looked at that page, I was in AWE…just drooling

All black is gorgeaus, i want a retuna mbp to match.

Am i the only one who was a bit baffled about the amount of leaked info and images that turned out to be true? 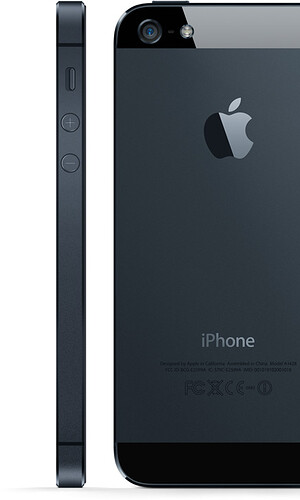 I love Apple, but I loathe the last two iPhone designs.

The original iPhone was also ugly to me, with the plastic antenna cover on the rear not really lining up to anything else, and the curves feeling too “fat” or unrefined. The then iPhone 3G was released, and everything was forgiven. The single piece of plastic on the back was clutter free and beautiful, and the curves were perfect. Then came the iPhone 4 and ruined it. Ok, sure, as a pure statement of form, it’s very well designed. But why did they throw the ergonomics out the window? The iPhone 4, in my opinion, is not made to hold by human hands, so I refused to get one (also, glass and metal is so much colder than plastic, and thin glass feels fragile no matter what they say). And some of that could have so easily been fixed with just a slight curvature on that metal frame.

And now, the iPhone 5. I really, really hope that pictures don’t do this phone justice, because to me, it’s a horrible mess. They say it’s an all metal backside, but there’s still glass inlays somewhere? I don’t get it, but maybe I will when I hold it. Right, now, it just feels as if they took the clean statement from the iPhone 4 and cluttered it up, making it both a form and ergonomic failure. It looks like a spare part which fell out of some cold, industrial machine. I don’t feel attracted to it like the iPhone 3, which invited me to squeeze it, or spin it around on the table, or tap it with my finger to rock it back and forward.

It breaks my heart because it doesn’t have to be this way, and Apple themselves have the proof: The iPod Touch. Both this new iteration and the last one used the same front as the iPhone, but their backsides are worlds apart better! Both the last generation Touch and this one are absolutely the most beautiful tech devices on the market today, and I can only pray that the iPhone 6 will finally unify their design.

Right now, although I’m a Mac user, I’m seriously considering getting a Nokia. Their Lumia looks more Apple than Apple.

nxakt: Right on about publicity. That is nuts.

eobet: I agree, the iPod designs are much more interesting than the iPhone. Maybe that’s just because we all saw the iPhone a month ago.

I couldn’t get over how beautiful apples communication is. This page here: http://www.apple.com/iphone/design/ is just designer cooking. Industry leading sh*t right there.

Very slick, but why do they give the depth dimension in MM and the volume in IN^3.

First gen iPhone was super. Nicely radiused, great feeling metal back, rational, beautiful object. Went to the US to get one.

3G iPhone was terrible. Crappy plastic, elliptical or some sort of nonsense radius curves, cheap feeling and scratched to hell. First iPhone broke so had to get this one. Always hated it.

% is a continuation on what the 4G has done, and stepped it up a lot. Design, fit and finish is so far and away better than any other phone out there it’s not even in the same ballpark. Like comparing a BMW to a little tikes plastic trike.

Like comparing a BMW to a little tikes plastic trike.