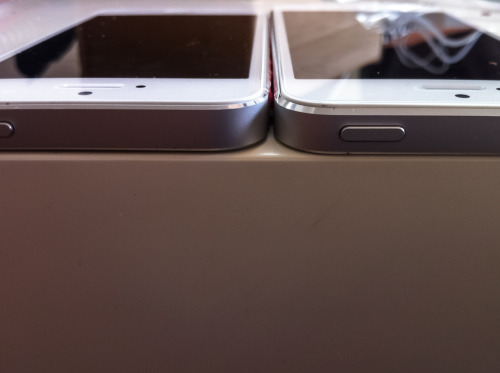 I uploaded those images yesterday and I am wondering if it’s a design tweak or a machining tolerance. Considering the level of precision in the iPhone 5 manufacturing, I am inclined to think it’s a tweak. But who knows…

Do you guys who have iPhone 5’s can verify this? How does the chamfer on your phone look like?

Interesting, that looks big enough to be a tweak.

The only doubt I have about the tweak theory is that considering the huge production volume and the very recent launch, it’s not as easy as simply adjusting the tool path. They would have to prototype it, go through testing and only then the alteration can be rolled into production. And that last bit surely is not just a matter of punching in a new value and going home. I have no idea how long the whole process would take, but it seems awfully close to launch date.

Impossible to say, and likely we will never know. Companies make what are called running changes all of the time. Sometimes they figure out a more efficient (cheaper) way of doing something, sometimes they find a way to execute an improvement, but they don’t want to call attention to it because they don’t want to slight people who already bought it, and they don’t want to manage the inventory headache of a new SKU. By making it a running change it can be implemented on the fly and quietly stocked on shelves. People who bought the original get to be early adopters, while people who waited get the perfected version (or the price optimized version depending on the tweak).

Is this only for the chamfer on the front side (a bit hard to tell from the picture)? …and then there’s the difficult question of which one is better looking? I’m sort of leaning towards the one to the left

I have one of the apple aluminium remote controls and must admit I was surprised to see how asymmetrical mine is. Given the potential for high tolerances with cnc milling I was surprised to see that you can see it is off just by looking at it. I wasn’t even looking for imperfections. (I realise a remote doesn’t have the same prestige and attention to all details as a phone though and mine could be a freak accident)

Could very well also be an issue with parts coming from multiple vendors, or just be a revision part like mentioned.

When you have as much production as Apple, most of their parts are sourced from multiple vendors to keep up with the supply change, so it is possible that one of the parts is actually sourced from a different vendor.

Which one is the newer phone?

Is it just an angle difference or do I see a thickness difference is the metal frame as well?

When you have as much production as Apple, most of their parts are sourced from multiple vendors to keep up with the supply change, so it is possible that one of the parts is actually sourced from a different vendor.

With their claims of high resolution photography for part matching, I seriously doubt what you are saying. Any other manufacturer, sure, but this is Apple (even though they are now post Steve Jobs).

Way too big a difference for those to both be within tolerance, you can hold +/- .005" on an operation like that without even trying. It’s either a design change, or a supplier who got it wrong. It seems unlikely for an Apple supplier, but unless they are QCing every part, it’s not impossible that one was done wrong (tool height not set correctly perhaps) and it went down the line.

I was looking at my colleague’s white 5 today and it is somewhere between the two in the picture. Also someone mentioned Apple’s own PR video (05’40’') about “optically analysing each part to find the best match” between the plastic inlays and the chassis. But here we’re talking about the outer, not inner, edge. It’s starting to look to me like the CNC feeler eff’d up and the tool ran too close to the edge. And then the part was simply overlooked and shipped for good.

Not sure if it’s my imagination, but some of the images on the Apple site appear to show symmetrical chamfers on the front and back, and others show a larger chamfer on the front. Could it be a design tweak to reduce the vulnerability to wear on this edge?

Hard to say, but rumor has it you can still use it as a phone.

Must be a tweak. If you look at the production video, they mill both chamfers simultaneously. Is the gap between chamfers consistent? If not, it’s a tweak, if they are the same then the tool or workpiece must not have been correctly “touched off”

That large chamfer looks like a QC mistake from a vendor that may be making the part from an old rev or is poorly managing scrap stock. No way is it a tolerance deviation. From a design standpoint it doesn’t leave much material at the top of the chamfer. I’d be concerned with damage and wear which makes me think its a pre-release part.

Apple really knows their customer. The video won’t load for me!

Might this be a tweak driven by aftermarket accessory adaptation?

… or to better match the chamfer found on the iPad Mini?