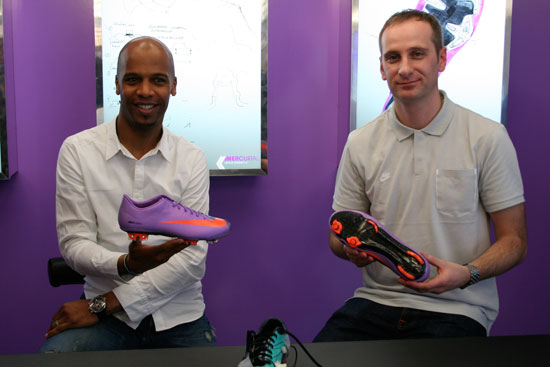 while attending the launch of the new nike mercurial vapor superfly II football boots, designboom had a chance to talk with the boots’ designer andy caine

that ‘flickering’ idea is so simple, yet genius. had that concept been used before? I’m a soccer player and I can see how that can be useful in finding teammates out of the corner of your eye (unless the other team’s players are using the same boots…)

that ‘flickering’ idea is so simple, yet genius. had that concept been used before? I’m a soccer player and I can see how that can be useful in finding teammates out of the corner of your eye (unless the other team’s players are using the same boots…)

There’s been plenty of boots that are one color on the outside and one on the inside. I think the “flickering” thing seems a bit of a marketing spin, to me. You find your teammate by their boots? The chances they are wearing the same boots is probably slim, not to mention you maybe look at the guys body, which is 500x larger than his feet and colored with the same jersey as you?..

I haven’t played with two toned super bright colored teammate shoes, but yea now that you mention it I totally ate the marketing up. I usually buy the basic pairs so I end up with black cleats all the time. And those vapors are pretty sweet, functional or not.

haha, really… heres the quote form the comments:
Ok, so there’s been some thought been put into these boots and obviously some nice design but I have a question for Andy - How do you feel about designing products for a company which then exploits children and people of developing nations to produce these? It’s a question which many designers can ask themselves.

really dude…
how do i feel… i feel crappy, when i have nothing else to think about, which is hardly never, but when i do i wish the jobs were still here so i could go to the factory and do more of my job myself. How do you feel about the fact that its absolutely impossible to not in one way or another ‘support exploiting people in developing nations’ since so many things that we use are produced there?

seriously, lets bring the production of all hush puppies, nike, whatever here with american materials, american labor, have them cost $220 instead of $80 and then sell a nickels worth, and go out of business. Im in favor of american made products but i dont have my head in the sand about where the industy is at right now. Baby steps.

bah… never mind, i shouldn’t try and get political im bad at it. But the children? really? im not a nike employee but the shoe industry has made progress in the last 15 years, any decent company is not using child labor. now Wal mart shoes…?

Back when I was a sneaker fiend in college, I used to get approached every day by activist-type folks who would criticize me on my ‘support’ of ‘sweatshops’. Instead of getting defensive, I decided to read about the topic and look into the matter. I learned that before addressing the situation, I had to start by getting rid of the word ‘sweatshop’. It carried negative connotations that immediately swayed opinions. It’s like asking someone if they wanted a ‘murder’ burger because you’re a vegetarian. I prefer the term ‘overseas factory’ to be the norm.
Anyway, calling them ‘sweatshops’ just because they work long hours for miniscule pay is ridiculous on a few levels. For one, many jobs ask for intense labor, and long thankless hours and compensate with minimum wage and no benefits. Ask a mall employee, a food service worker or certain data entry workers if they get paid enough to eat and pay the bills without having to live in their mother’s basement.
In addition, these claims of unfair wages and inhuman conditions are all relative to the decadent and spoiled lifestyle that is america. America. where auto workers want to get paid like doctors for standing in one spot and screweing in the same bolt to the same spot over and over again. Are you kidding me? Getting paid $5 a day is horrible here, but in the Philippines, where the conversion rate is $1=47 pesos, and you can get a decent meal for 200 pesos, all of a sudden, it doesn’t sound so bad.
American activists want to feel good about themselves but don’t mind reaping the benefits of the very thing they fight against. A few years ago, in India, they tried shutting down an overseas factory due to pressure from protests and activists from america. Surprisingly, there was a picket outside the factory, demanding it stay open. You know who was picketing? The workers. It gave them a steady, albeit small source of income. They were grateful for whatever they got and didn’t act like they deserved their payday right off the bat. The attitude of ‘forget you, pay me’ is the very reason that china and India are coming up…because they’re finally seeing dividends for the work that American workers are too lazy to do.

Damn, that’s a rant, and I probably hijacked the thread. Sorry.

yup, we’re OT, but felt I should at least join the fun…

I’ve been in the footwear industry for 10 years now and have visited probably at least 50 different factories. All across the spectrum from lower price point suppliers to ones used by the big brands. My thoughts are below-

I know there are pretty rational people here on core, most of which have had experience working with asian suppliers so see the truth, but just wanted to take this opportunity to share my perspective, FWIW.

PS. If you want to see some actual pictures of real ftys click on the First Pullover link in my sig.

PPS. I’m off to China again this saturday, and will no doubt take some more pics. If there is anything specific someone wants to see or know let me know (ie. I’m going to see if I can find out the hourly wages) and I’ll see what I can do.

I can’t speak to the footwear industry, but other manufacturing in China (and other places) is run the same way. My Dad helped set up a plant with a vertical boring mill for some steel casting finishing work. That company paid the operator of the machine $250 a week, which at the time was DOUBLE the going rate just because they wanted someone with the skillset they needed. I’m sure most of this is preaching to the choir, but until you’ve spent time in developing countries and in factory work settings in those countries, you should really reserve judgment. How many immigrant workers (legal or illegal) in this country do work happily that you would never do? It’s the same thing. They want the money, and someone is more than willing to pay them.

How many immigrant workers (legal or illegal) in this country do work happily that you would never do? It’s the same thing. They want the money, and someone is more than willing to pay them.

Or students, for free?

or graduates who are just looking for a shot and a chance to get their foot in the door? :::sheepishly raises hand:::

Certainly both are options…

…because they’re finally seeing dividends for the work that American workers are too lazy to do.

I dont really think you can say that, its not about laziness of the american worker, its about cheap labor.

Also, auto workers dont get paid like doctors, im from michigan so thats another topic that i hate people blowing out of proportion.

to stay on topic a bit… might as well try… Those soccer shoes are pretty cool.

this is very true, and many of these rural workers only stay at the factory long enough to set some money aside for their family to live off for awhile, and just leave when they have enough, straight up just dont come back to work one day.

although there is word on some labor shortages over there right now, can never know if its real or not, but the shoe factories are becoming less lucrative, air conditioned electronics factories are where most workers want to be at these days.

great post R.
I know we are now completely off topic, but one of the things that i was most interested in when i got hired in (and even still) was “china”, the factories, the workers, the costs, its all very interesting and immensely important once you become a professional. Hopefully i will be making the trip this year.

Workers get an average of $250usd/ month, work 10 hours per day and live in dorms of 8 people per room

sorry to take it OT, but wanted to followup.