i’m looking into developing some jewellery designs into 3d cad models for a client. they will supply some handmade prototypes (like those shown below), possibly some sketches and request they be translated into 3d cad models for 3d printing and rendering. i’m use to doing cad models of bezels, shells and casings – things with fairly fluid and uniform surfaces. my question is, when it comes to complex non-uniform organic forms like these, what is the best approach to take in terms of translating them into 3d cad ? which is the best cad technique to use ? i was thinking direct modeling in alias/rhino, like point pushing and pulling. i mean, i usually use solidworks but i think surface and solid modeling techniques in solidworks on these kinds of designs would just take me too long. maybe doing a 3d scan first ? i dunno i dunno, i’d appreciate any advice or suggestions you have on this…thanks ! 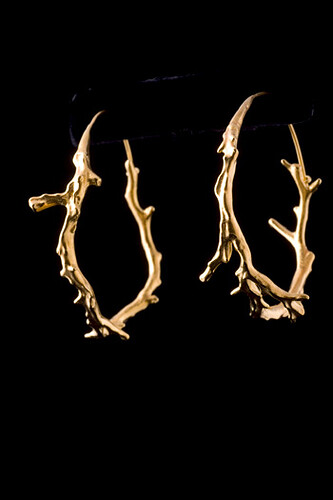 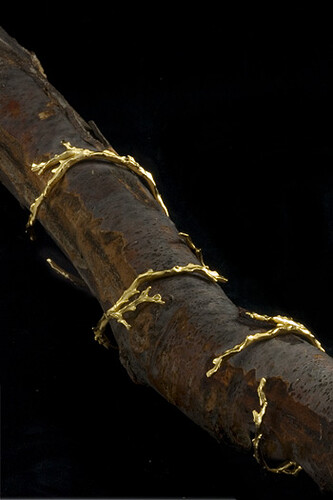 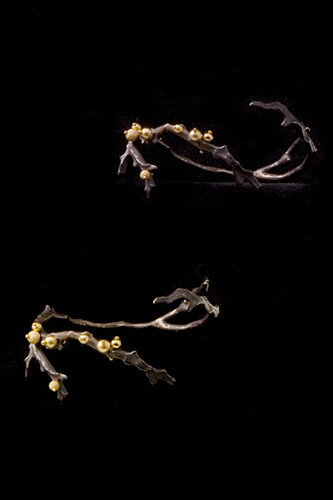 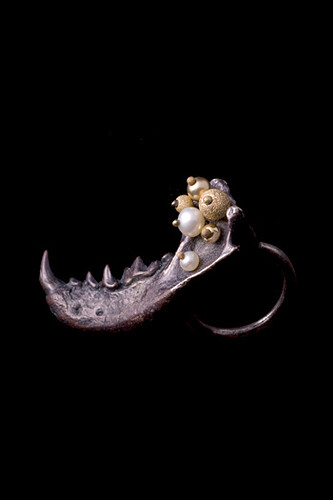 With shapes that crazy and organic 3D scanning might be your best option as far as time savings. These would take forever to model in Solidworks. I have seen some tools in Maya that could work for this, but I suppose that wont help you if you don’t have access to the software.

your best bet is to ask for a physical carved model and have it scanned then utilize it as a underlay to build your surfaces from. Working from sketches can be done but is time consuming and really depends on how good the sketches are that you are provided. You may end up doing several renditions until you get what the client wants.

You are correct also in this case using a tru surface modeler with the ability to easily push / pull will speed up your process, although it can be done in SW just a little more effort and time is needed.

My question though would be, if your client provides you with a physical sculpted sample, why do you need to model in 3D. A high res scan would be good enough to obtain a 3D print.

I think even in Alias those would take you an extremely long time to build even off of the point could data. You could build a 100 span surface that still probably wouldn’t accurately capture what you’ve shown - especially things like the texture.

It may be worth looking at something like this: http://www.sensable.com/ direct sculpting that supports export of surface data into Solidworks.

If you have SolidWorks Premium you can go to Tools → Add-Ins → ScanTo3D and if you have scanned these models, it can bring those in and you can have it autosurface the model into a valid solid model.

If these are truly finished designs (or they will be hand sculpted again after feedback from seeing the 3d print) then scanning seems like the only sane thing to do.

There is also several plugin programs for Rhino, 1 I looked a while ago is Matrix. It has standard ring sizes, different gems with different cuts & sizes. Not sure what the learning curve would be on that, has a few more windows than rhino it looked like ( I didn’t bother to test it at the time). But I agree that if they have pre-made physical models the quickest would be to 3D scan them.

I’ve seen it used many times for exactly what you’re trying to do here.

Interesting. It is like the perfect object NOT to be done in CAD. May I ask what the purpose of going from analog to digital representation is in this case? Duplication or scaling or some other form of manipulation? This kind of object looks to me that it would have no benefit to be converted to surfaces, scanning a high resolution capture and using the resulting mesh file would capture the form and intent and not overly smooth things out like nurbs would try to do. Unless there is an purpose in going to surfaces that I am missing.

If simply rendering, the mesh file as well would fit the bill.

Cyberdemon hit the nail on the head. Sensable working off of a 3D scan would be “Best Case”. The scanned data can get really heavy, but one thing that the Sensable software does it take that scanned data and turn it into a voxel based model. Think of the data set as now like grains of sand that you can sculpt directly on, smooth, and/or make changes to. It really does blow everyone else away because you dont have to worry about surfaces or water tight in the same way as Rhino, SW, Pro/e because of the nature of the data set being a voxel. You can also kick out of the software a NURBS patch surfaces afterwards that can be opened in any other 3D program.

So what’s the catch… there are 2 physical “robotic” arms to use and 3 versions of the software. 5k, 10k, and 27k. You would need at least the 10k version to get the data out correctly to some other 3D program.

Lastly you might want to let your client know that because of the metal nature of the object, it’ll have to be “coated” with something that will make it easier for the laser to pick up.

Think of the data set as now like grains of sand that you can sculpt directly on, smooth, and/or make changes to. It really does blow everyone else away because you dont have to worry about surfaces or water tight in the same way as Rhino, SW, Pro/e because of the nature of the data set being a voxel. 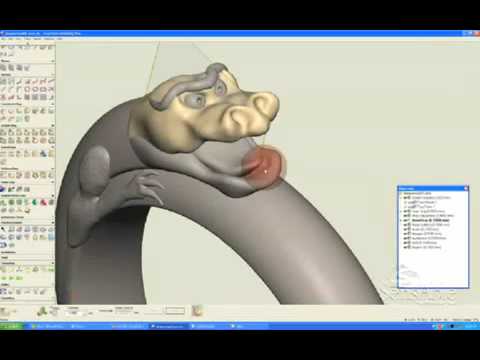 Heres one that’s probably most relevant to this topic. But if you search for “Sensable” you’ll find a bunch of other demos. I’ve never used the software myself, but my former roommate was their sales engineer for a few years so he did most of the demos you’ll find and was always pushing the software. I never found an application for it myself but this definitely seems like it would be the right type of project for it. Cost is obviously an issue though (then again, a seat of Alias isn’t cheap either).

after contacting the jewellery designer, she explained that she was experimenting with combinations of sketches and models - the designs are not finalized yet. as i gather, i think she wants to get some 3d models started to see how the design can be further visualized and developed between her model and sketch inputs. so i explained that 3d cad scanning was probably the best way to go on these once the hand models are more refined. i did try t-splines, really cool little program but again it would just take me too long to develop these kinds of designs in it. maybe i need to look into developing sub-division modeling skills in 3d cad, do any of you use this type of cad in consumer product development ?

i would love to check out that sensible software, that does seem amazing, didn’t see any demos on their website or anything. i look forward to when we can project 3d holographic interpretations of objects in real space in which we can reach into them to sculpt and manipulate them in real time – that’s the closest i could see us getting to 3d digital sketching. well at least sensable with their haptic devices are making some headway in that direction. anyhow, thanks for all of your help, questions, advice and suggestions – it got me trying and thinking about this in many new and useful ways.

Not sure where these two programs fit into what you are trying to do, but they have an interesting approach to form creation, the videos on YouTube do things that are impressive for the kind of shapes you are working on.

modo or zbrush or mudbox or 3ds max or maya or sculptris. ( I personally love modo)

modeling something like this definitely lends it self more to the poly/sub-d workflow than anything NURBs based.
If the only goal is a 3d print all of these programs can export as an STL or OBJ its just up to you to make sure there are no holes or naked edges or crap geometry.

Yeah, definitely look into a sculpting tool such as ZBrush or Mudbox.

As the original form was sculpted by hand, we had no digital data to work from. The options were to a) high res 3D scan and re-topologise or photograph and model from scratch. Client didn’t want to pay for scan so we photographed & modeled from scratch.

We built the model in modo - as a subdivision model, the exported a triangulated obj for the rapid prototype to made.
I wouldn’t touch that form (yours or mine) with 40ft barge pole in CAD - you will NEVER achieve that organic hand sculpted feel in an application designed to radius edges.

Modo or any other decent sub’d/sculpting app is going to give you much greater control & flexibility over the creation of that shape.

Good luck & keep us informed of your progress.

How did you handle minimizing perspective distortion when photographing orthographic shots for lining up with your viewports in Modo?

As long of a lens as possible and maximum zoom flattens it out. I have a project to build an othrographic photography rig that would take tiled photographs of an object and combine them into a single “true” orthographic photo. There are labratory orthographic lenses but they can only take pictures of objects the same size as the lens.

How did you handle minimizing perspective distortion when photographing orthographic shots for lining up with your viewports in Modo?

As above longest lens / max focus. I used the Canon 70-200mm on my 7D which gives you a 35mm equivalent of 320mm. For sure the photography can only take you so far (hence reference images)

I had a physical bowl on hand throughout so once I had the form blocked out - good ole hand eye took over on the digital sculpting process. it was the first time i’d worked through this process and actually found it very satisfying. Having the ability to deform/form/bulge/push/pull/flatten in digital space is awesome. No more filler-sand-filler-sand-sand-sand !

I actually documented the whole process - screen grabs, preview grabs, renders etc. See if i can’t get something together…

One quick point to note - is we were never after an absolute identical replication. the cleint wanted to retain as much of that hand sculpted/natural feel as possible. So while we were 99% faithful to the original, we did have the opportunity to work our own artistic touch to the model… just small touches. Tweak proportions, bend of the arms etc.