The trend is that cars will have deep dash boards, like those in the new Beetle. Appearently, the new Civic will have a deep one too. I find it extremely annoying. The first feeling when I sit in those interiors is intimidation. I don’t feel like I am connected to the interior in any sense and certainly don’t feel that I can feel the surrounding of the car let alone control it. I just don’t feel I belong in that space.

Not just Beetle, I get the same feeling from new cars like Acuras and so on. My 97 Honda, My mom’s old 95 VW and my dad’s 95 MB have pretty straight forward interior that puts the driver in the control position. The Honda and MB have a short dash board, one that slants down almost immediately from the windshield.

I don’t think all those new electronic gadgets are the reasons for such long dash boards. What’s your take? Or does anyone here know the real design/marketing/engineering reason?

I am assuming that by “deep dash board” you mean the distance between the instrument binnacle and the bottom of the windshield. That distance is determined by the rake of the windscreen…I.E. the more slanted back the windscreen the longer this distance needs to be. For example, a semi truck has a very vertical windscreen and so its dashboard will be very narrow, while a Lamborghini Countach has a steeply raked screen, so the dashboard is “deep”. The exterior styling and the driver position are the determining factors.

I don’t think the angle of the glass is such a huge factor in non-sporty cars. The Acuras I was referring to are sedans. The Beetle certainly doesn’t have sporty windshields. My Honda which has very short dash board is a 97 Prelude, which is supposed to be sporty.

Whereas the new Audis, Beetle, Acura and now the Civic have horrible deep, if not massive dash boards.

what mbd said is still true. The z4 does not have a raked windscreeen, if it did, the ip would be huge. The Beetle has that large arc’ed profile to maintain, once you have the design, to fit a person into that package, the driver sits pretty far back… I wonder if it would have been different had they made a new platform that had a rear engine? Most likely.

Old hondas (like your prelude) have relatively flat (not much compound curvature) in their windscreens, they are also not very raked. I think the Murchialago just had little headroom, so the raked windsheild is close to your face (I’ve sat in a few) which to me is way more uncomfortable than a deep IP.

Let me clarify what I was trying to say. The windshield rake plays a role, as does the driver position. The relationship between them is the determining factor. Modern and sporty cars tend to have more steeply raked windscreens than older cars. This goes for sedans as well. Sedans as a rule have a more upright seating position and much more headroom than sports cars. If you sit in a Carrera GT you will notice that you are very close to the ground and the top of the windscreen is pretty close to your face, while the beetle has a more upright seating position and much more distance between your head and the top of the windscreen. The beetle’s iconic, arching roofline places the highest point (with the most headroom) over the driver’s head. This forces the bottom of the windshield further from the driver.

If you are willing to give up headroom and recline the seating position, you can place the driver closer to the windscreen, thus shortening the dashboard. 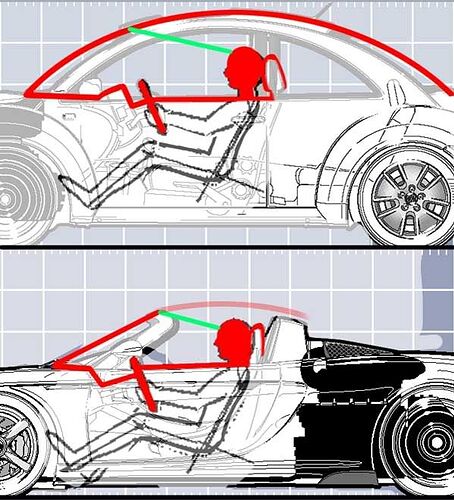 Another factor in the depth of the dash is the amount that the windshield is “cab forward”. The New Beetle’s windshield may not have as much rake as the new Civic, but the windshield does continue forward the engine. Since a human and an engine can not occupy the same space, the human must be moved backwards in the chassis. This leads to a long dash to link the windshield to the driver.

I liked cab forward until I sat in cars that had it. The visibility is greatly reduced because the A-pillars are typically wider (to accomodate a roll over). Perhaps Honda solved this with the addition of their tiny windows in front of the side mirrors in the new Civic. Which, by the way, is contained in a great gallery at vtec.net.

Thx for the diagrams mdb. What I don’t get is, why has this become more like a trend? Granted that there’s more rake on newer cars, but there are many examples of older cars that have well designed interior.

This also brings another question. Do car companies really believe that customers will be willing to sacrifice userability for style? Car isn’t like regular product. People do buy cars for its style for a huge part. However it seems that car companies are taking it more than what it should be.

Or is it just me again who’s complaining?

Unfortunately, I think most drivers don’t care if they can see out of their cars. After being nearly run off the road by SUVs for years, that is my conclusion.

BUT, there is another reason for the recent trend of raking windshields. That is the new pedestrian safety regulations in the EU. Apparently, more windshield rake reduces the chance one’s brain will be splattered across the front of the car. At least that’s what I’ve read in Car and Autocar.

Probably this trends into North America because of common models, such as Focus and Echo and cars that may share the same A-pillar, like Civic and Corolla.

Many female drivers, including my mom, hugs the steering wheel because they want to see a better view of where the car is hitting. A car like the new beetle, which happens to be popular among females, went the other way.


What I noticed in Boston is, crazy/rude/bad/agressive drivers are mostly soccer moms in minivans or suvs.

Many female drivers, including my mom, hugs the steering wheel because they want to see a better view of where the car is hitting.