I’m currently working on a project regarding alternative sports for my master thesis, and I’ve investigated and worked with lead users of a phenomenon called Wakeboard winching → http://iddqd.se/exjobb/water.jpg Now I’m reaching out for you people to poke holes and flaws on my thoughts so far. (I’m writing a report atm)

Some research and reports I read claimed that people usually never invent or innovate out of the blue, but take a lot of inspiration from prior experiences and interests. This made me curious about what ignited the lead users to innovate. So basically, what happens just in front of that curve…

Since trends&evolution in alternative sports tend to change rapidly, almost only topped by fashion trends. Surfing became my startingpoint, and then i took a deeper look at what causes the paradigm shifts. Example: Surfing → skateboard → snowboard

The catalyst I’ve recognized so far are:
- Location
No snow? No Waves? → Get creative
- Financial
Except for being tied together with not being able to travel to the locations where there are ideal surroundings, theres often gear to finance. Two examples are fixie-polo and frisbee golf.
- Crossbreeding
Taking influences of other sports and merging ideas is also common.
- Core values change
This is one of the things I looked at a bit deeper. The shifts that happen due to this, are often not as radical as the other. Often it just results in emphasis on other aspects of the activity, like starting to dress differently, or move the activity to a new venue.
Obviously they are all interconnected, and usually all influence in different amounts when the shifts take place.

I tried to create a sort of family tree, and then mark out some clear influences/turningpoints. So far theres just influences in terms of gear innovations. 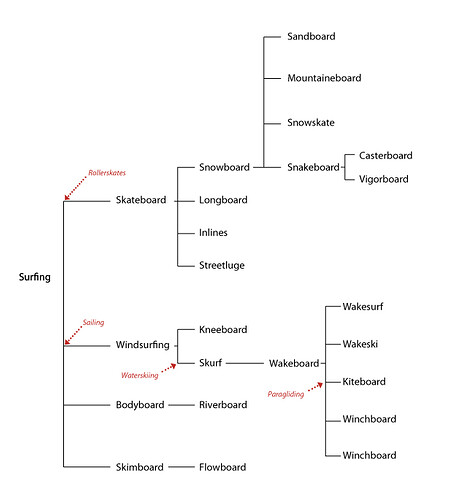 The Pendulum effect
This is the important part, where I need you guys to tear me a new one.
A lot of times, when evolution occurs within this field, it seems to be a very clear counteraction to what is going on in the mainstream scene.

The observation that started it all:
Since my sport was wakeboard winching, where there has clearly popped up a very “rock n roll” style of attitude, where basic tricks are favoured in front of very technical maneuvers. Riders also search for remote undiscovered places to go, and in general theres a very gritty feeling over the whole phenomenon. This is contrary to wakeboarding behind boats, which has turned in to a sport with an olympic gymnast level on the tricks, extremely expensive boats with tailored waves, and many pro’s coming from a wealthy background with families who have the possibility to supply their kids with this at a house by the lakes of Florida.

So this is my attempt to create a cycle of adoption and trying to point out the place of anomaly that turns in to a counteraction of either small scale focus or a very different way of doing things. It felt wrong to make it as a closed cycle, mainly because I dont think that it’s accurate. Things do come to an end, which is why I think a Helix is more appropriate. I’m trying to convey something like a mix between the Adoption curve and a pendulum.

I do admittedly have some issues with how i should illustrate it. This is my latest attempt: 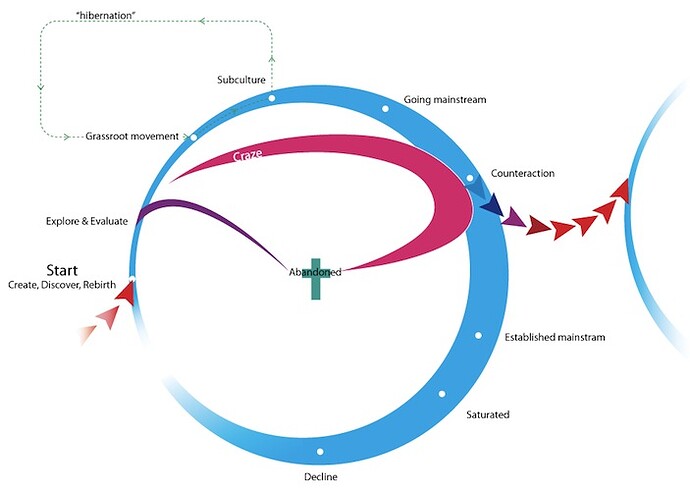 The thickness of the components is supposed to represent the amount of adopters.
It also meant to include som different scenarios, like the “Craze” when something goes popular over night and fades out quickly. Admittedly they usually never burn out all together but my own experience is that theres is a lot fewer continue after a very intensive and short fad/craze.

And in a larger perspective, jumping from halo to halo. 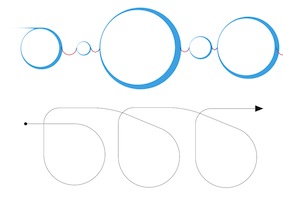 Right now im working on some explenation of the phases, and adding some tells to how you can identify them.

So does it make any sense at all? Do you have any tips of similar information? I’ve read a lot from Von Hippel and some Thomas Kuhn.

I’ve tried to shorten this down a lot, but it’s pretty late now so I’ll adjust the uncomprehensive parts tomorrow.

If you made it this far, I’ll buy you a beer next time we meet.

So after bad nights sleep, I’ve had the chance to ask some classmates and my professor about their opinion. Most of them thought it was confusing to look at, which wasnt very surprising.

Did some new attempts on the Cycle thing, with a close connection to the original diagram.
Problem as i see it is that it will also get very cluttered if enter other scenarios instead of just going popular and then declining.
The order and accuracy of the sport is not entirely accurate but for now it shows my thoughts decent i think.

Pendulum-diagram2.jpg815×277 31 KB
The second one is an try to make it similar but to show the backswing/pendulum effect that can occur. Doesnt feel right, but i uploaded it for the benefit of discussion. It was hard to figure out a good example to note the high and lows with though… So im starting to get a uncertain about it.

Pendulum-diagram3.jpg800×311 64.2 KB
After talking to my professor, we agreed that it would probably be wise to break down the scenarios and show them each on their own, and then maybe try to put them together in an overlay of eachother. I’ll try this tonight.
Brett_nyc October 14, 2010, 6:41pm #3

This is a great example of analysis paralysis. Is your end result to provide a detailed chronology of “alternate” sports and their rise and fall in popularity? Is it to eventually design the “next” alternate sport? Is it to design gear for winch wakeboarding? Is it to practice using Illustrator?

Very generally, I’d disagree that sports go away as much as you show on your sine like charts. I think some stuff pretty much dies, like Razor scooters, but the most others keep chugging away with perhaps slower growth rates but don’t fall off like you show.

on your family tree, I think there’s more cross pollination than you have shown.

Personally its more to try to understand how the evolution happens, and it started forming in my head before I had decided where to take the final product. Now im trying to sort it out and make some sense in it, so that i can explain it to others. So far, not very succesful

Yeah, the sine-wave continuation was to illustrate that it doesn’t die, and that it varies in magnitude. Every sport would definitely have a different height of it than others, and some would disappear like you said.

There is some crossbreeding missing in the tree, and also some of the other catalysts of the shifts, since obviously technical influences is a small factor in the industry.

Thanks a lot for your input. Mental note: +1 beer for Brett_nyc

I think a lot of it it is about wanting to do a fun sport, something you already love, in a new context; either out of necessity or play or whatever. There’s usually some overlap of gear to make the transition to the new context easier.

Yeah, and I think history shows that too. Just how skateboarding and snowboard were interpretations of surfing. Also that there are some catalysts that force people to take the activity and adapt it to their conditions, like location.

I think thats one of the reasons why it intrigues me so much, because its very democratic and open to change. How the organisations have to listen and adapt to the users, in much higher extent than most other sports. Compared to fx soccer where the Organisations and federations dictate what is acceptable with an iron fist.